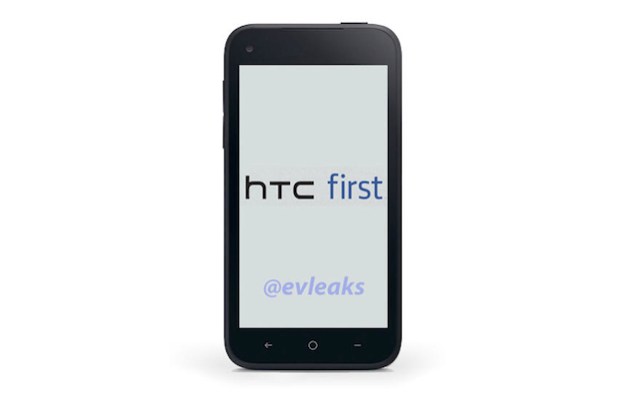 Check out our review of the HTC First Facebook phone.

The saga of the Facebook Phone looks set to come to an end this week, and as the event gets closer so more details on what the social network will announce emerges. We’ve heard a little about the software already, and now it’s time for more about the phone. The image you see above has been leaked through the Twitter account @evleaks, and as you can see features a phone called the HTC First, which is believed to be the retail name of the Myst/Opera.

If this is the Facebook Phone, which isn’t known for sure at this stage, and it shares the same specifications as those leaked for the HTC Myst, then the screen will measure 4.3-inches and have a 720p resolution, while a dual-core processor will power the device. A 5-megapixel camera has also been rumored, but the star of the show – hopefully, at least – will be the Facebook Home software built over the top of Android 4.1 Jelly Bean.

HTC has long been associated with the Facebook phone project, but this is the first time we’ve seen a rendered picture of the phone it’ll supposedly be releasing. The rendered image combined with the relatively basic specification suggests the First will be priced very competitively. A subsequent leak showing the HTC First in a variety of colors – red, white and a fetching sky blue – backs up the theory HTC intends to promote the device to younger Facebook users.

Will Facebook reveal the HTC First alongside its Facebook Home software this Thursday? Don’t forget, CEO Mark Zuckerberg has repeatedly said the company isn’t interested in hardware, so it may decide to leave the phone’s reveal to HTC and concentrate on its software during the event. Facebook’s gathering starts at 10am PT on April 4 at its California headquarters, and we’ll bring you all the news as it happens.

Topics
Video-editing app LumaFusion to get a Galaxy Tab S8 launch
Best Cyber Monday Tablet Deals: iPad, Amazon Fire, Samsung Galaxy Tab
These 6 things could make the Pixel 7a the perfect Google phone
The most innovative smartphones of 2022
The most innovative tablets of 2022
Sorry, Elon — your Tesla phone is never going to happen
Fitbit Cyber Monday Deals: Save on Sense 2, Charge 5, and Versa 2
Apple Cyber Monday Deals: Apple Watch, AirPods, iPad, MacBook
Get these JBL earbuds and 4 months of Music Unlimited for $25
OnePlus’ new Android update policy matches Samsung, shames Google
How Apple can fix iOS 16’s messy lock screen customization in iOS 17
The best voice-changing apps for Android and iOS
Spotify Wrapped 2022: what it is and how to view it