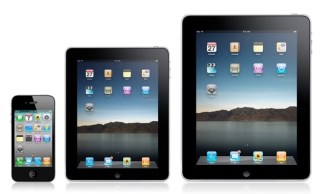 Rumors have once again surfaced regarding a so-called ‘iPad mini.’ The folks over at DigiTimes said that according to “sources in the supply chain,” a 7.85-inch iPad is “likely to launch” at some point in the latter half of 2012 (“prior to the fourth quarter,” says DigiTimes), with the iPad 3 believed to be coming in the early part of next year, at the end of the first quarter.

The smaller sized iPad is said to be coming in response to increased competition from devices such as Amazon’s recently released 7-inch Kindle Fire tablet.

The release of an increasing number of large-sized smartphones is also cited as a reason, though it’s thought the iPhone 5 will, when it’s released, be sporting a screen larger than the 3.5-inch one found on the iPhone 4S.

The DigitTimes report goes into more detail, saying that the Cupertino company will be buying 7.85-inch panels from LG Display and AU Optronics (AUO), with the mini iPad tablet going into production at the end of next year’s second quarter.

Before Friday’s report, rumors of an ‘iPad mini’ last surfaced back in October, with suggestions that such a device could be priced at around the $200 to $300 mark.

With Amazon’s $199 Kindle Fire seemingly flying off the shelves, perhaps the mini-tablet market is proving too hard to resist, despite Apple’s late CEO Steve Jobs last year calling 7-inch tablets “tweener” devices – too small to be tablets and too big to be smartphones. It seemed that with Jobs at the helm a mini iPad was out of the question, but with Tim Cook now running the show, and rumors of such a device increasing, it’s possible that a smaller-sized iPad could yet see the light of day.