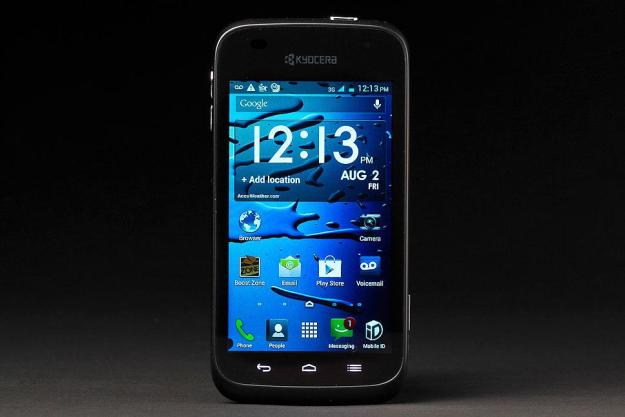 “The Hydro Edge is water resistant and only costs $150 on Boost and $20 on Sprint. It’s a decent phone for those on a tight budget, but comes with some serious trade-offs.”

Kyocera is making a name for itself in the mobile world by making smartphones that can stand up to common punishments. The ultra-rugged Torque looked danger, water, dust, and falls in the face and laughed and could do so because of the bulky outside. The new Kyocera Hydro Edge is just as confident about its ability to resist damage from water and dust, but doesn’t have the armored plating.

Available now on pre-paid carrier Boost Mobile for $150 and Sprint for $20 with a 2-year contract, the Hydro Edge is relatively inexpensive. That price comes with some compromises. Depending on what kind of phone you want, the cheap price tag may not represent a real value.

The most surprising thing about the Hydro Edge is how normal it looks. Water-resistant phones are usually bulky or at least fitted with port covers to keep water out of sensitive areas. The back plate on the Hydro Edge needs to be locked to protect the battery, but otherwise, the Micro USB port and headphone jack have no protection. Yet Kyocera says it’s completely fine to get the Hydro Edge wet and even dunk it in water up to 3.28 feet for 30 minutes. And that’s what we did.

The Hydro Edge didn’t appear to suffer any ill-effects from the dunking, even after 20 minutes. We did see water at the entrance to ports yet that didn’t affect charging or use.

Even with the water and dust proofing, the Hydro Edge has an unassuming look. The light, compact body’s edges are curved for a comfortable hold. This plus the 4-inch display and the placement of the power button and volume toggle make the phone easy to use one-handed.

The camera shutter button is also well-placed and doesn’t get in the way of normal use. Capacitive Home, Back, and Menu buttons sit under the display despite the presence of Android Jelly Bean.

Not a great screen

The screen is where the Hydro Edge shows its price most blatantly. The 4-inch panel’s resolution of 800 x 480 pixels is poor by today’s standards. On light backgrounds we could see the display’s individual pixels. Reading small text isn’t completely troublesome, it’s just not ideal. Though the display utilizes IPS technology, the viewing angles aren’t as wide as we’d like.

You won’t see color distortion when playing accelerometer-based games that only require a bit of tilt. Sharing a video with one or two friends is a bigger challenge. Overall, the display is bright and vivid enough for everyday use, it just won’t satisfy people who consume a lot of visual media on their phones. If you care about your phone’s screen, this isn’t the device for you.

It runs a fairly clean version of Android 4.1

The Hydro Edge runs on Android 4.1 Jelly Bean that is mostly unmodified from stock. Kyocera added a handful of apps and settings while leaving the graphical interface mostly alone. The few tweaks that do exist are designed to add efficiency. Lock screen icons make it easy to quick launch up to three apps and radio toggles in the Notification drawer offer faster access than digging into the settings when you want to connect to Wi-Fi, Bluetooth, and more.

We’re also pleased to see a couple of tools for maximizing battery life. Eco Mode is an easy way to stretch battery life when you’re itching for a charge and kicks on at a certain percentage or is available at a tap. MaxiMZR reduces unnecessary background data transfer (based on your app usage) to conserve energy. Both can be tweaked to your needs.

Kyocera and Boost don’t pre-load many apps other than these – a good thing since there’s only 4GB of internal memory. One in particular worth calling out is MagniFont, a feature that enlarges the text throughout the system to make it easier to read. A decent feature for older users, even if it doesn’t integrate so well into the overall interface.

Not a great camera phone (no front camera)

Camera quality is another area where Kyocera cut corners to keep costs down. The 5-megapixel rear camera on the Hydro Edge produces really noisy pictures in mixed to low light and un-sharp pictures in good light.

Given the poor quality of the rear camera, we doubt a front cam would have been worth using.

Quality is on par with smartphone cameras from more than two years ago and makes the camera hardly worth using unless you’re into adding heavy filters.

One of the few places where Kyocera fiddled with stock Android is the camera app – and not for the better. The app doesn’t offer much more in terms of settings and features but the interface is less easy to use. Plus, there’s no Photosphere. HDR and white balance settings don’t really help improve photos.

Finally, there’s no front-facing camera. Usually considered a must-have on modern smartphones, we can’t lament its absence. Most front cameras aren’t impressive compared to the ones around back. Given the poor quality of the rear camera, we doubt a front cam would have been worth using. Video chatters, steer clear.

Decently powerful, but not enough storage

The 1.0 GHz dual-core Qualcomm Snapdragon processor isn’t the speediest or most powerful around. It’s at least backed by 1GB of RAM for multitasking. But the 3,819 score on the Quadrant benchmark points to a phone that can handle basic apps but not graphics-heavy games or power-hungry processes. You only have 1GB of internal storage to work with out of the total of 4GB, anyway, so huge games are going to take up too much room. You can add a MicroSD card for music, pictures, and other media.

Our overall experience with the Hydro Edge matches the benchmark results; the phone didn’t feel sluggish while playing games or browsing the Web, but it lacked the speed and smoothness we experienced with other phones in this class like the Samsung Galaxy Express.

We found the phone’s connection to data frustratingly slow at times. We tested the Boost Mobile version of the Hydro which runs on Sprint’s 3G network. In our testing area (New York City), 3G is pretty slow. When trying to download Web pages and apps in Midtown Manhattan while showing full bars, the system was so crowded that the phone took more than five minutes to load yahoo.com. In a less crowded neighborhood on off-peak times we still only saw an average of 0.52 Mbps down and 0.50 Mbps up.

For call quality, Kyocera employs a technology dubbed Smart Sonic Receiver that uses tissue conduction to deliver clear audio in noisy environments. You won’t be able to place the receiver anywhere on your head and still hear good sound, but when placed on your ear voices come through loud and clear, even in a very noisy room. The mic cuts out background noise effectively when you aren’t talking – it bleeds through a bit with your voice. While people on the other end of calls heard us just fine, voices had a distinctly fake/techie sound to them.

With light to medium usage, the Hydro Edge barely lasted a full day. If you plan on staying out for more than 9 – 10 hours you’ll want to utilize that Eco Mode.

The Kyocera Hydro Edge is a budget Android smartphone with one really nice high-end feature: water and dust resistance. Unlike the Torque, it’s not meant for the ultimate mountain adventurer. It’s for people who want use their phone in the rain or at the beach. Accidents happen – at least with this device a drop in the toilet won’t mean having to replace it or worrying that washing it off will do more damage. That aside, the Hydro Edge has a number of drawbacks from the mediocre display to the sub-par camera. The relatively low price balances some of that out. Still, this phone is made for people with basic needs and a small budget. Whether you pay $150 on Boost or $20 on contact with Sprint, you’re getting a seriously dialed-down experience.

The Hydro Edge is one of the better deals on Boost Mobile. If you’re going to do the contract thing with a bigger carrier, there are better options. The Kyocera Torque (Free) on Sprint is one. The Samsung Galaxy Express ($1) on AT&T is another.