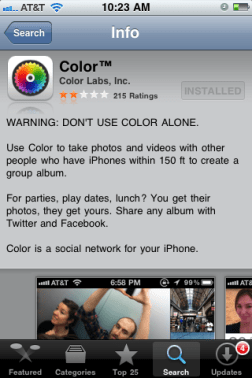 The newly launched public photo-sharing app Color, available for iOS and Android devices, took the tech world by storm Thursday after it received a massive $41 million pre-release cash injection from venture capitalists. Much of the enthusiasm surrounding the app also came from its radical functionality, which treats all photos taken in the app as public, and shares those photos with any other Color user within 150 feet, friend and stranger alike.

Because Color decides for you who gets to see your photos, and bases this entirely around being nearby other Color users, the first-day reviews aren’t good. Early adopters say that the app is not only worthless unless used within the vicinity of other Color users, but also makes them feel lonely because their pictures are the only ones that show up in the app when they use it alone.

The problem is so apparent that on iTunes the first thing in the app’s description is “WARNING: DON’T USE COLOR ALONE.” The app currently has only a two-star rating based on just over 200 reviews. (The majority gave the app one star.)

Users also complained that the app includes very little instruction for how to use it, and doesn’t explain what the app does.

Not surprisingly, the company is taking the criticisms extremely seriously, and is already working on an update to fix the “loneliness” problem, reports Mashable.

According to Color co-founder and CEO Bill Nguyen, the update will do two things: First, make it impossible to use the app unless other Color users are around; and second, increase the distance required for another user to be considered “nearby.”

Nguyen says the update will allow the app to determine the appropriate distance for creating the app’s “dynamic network” based upon the population density of a user’s location. So, in tightly populated cities like New York or Tokyo, the app’s current 150 radius could still work well. But for spread-out cities or in smaller communities, the app will increase the distance automatically to ensure that all users can access other’s photo streams.

The update should be available as soon as the middle of next week. Until then, we recommend anxious Color users simply get more friends.

Topics
Video-editing app LumaFusion to get a Galaxy Tab S8 launch
The best grocery list apps for iPhone and Android in 2023
My iPhone 14 Pro camera is ruined, and it’s all Apple’s fault
The best QR code scanning apps for iPhone and Android in 2023
This Apple leaker just revealed tons of changes for iOS 17 and iPhone 15
Best Samsung Galaxy S23 and Galaxy S23 Ultra accessories
The best phones in 2023: which smartphone should you buy?
You shouldn’t buy the Galaxy S23 Ultra — and that’s the best thing about it
Netflix for books: Get 2 months of Kindle Unlimited for free
The best Android phones in 2023: top 10 best ones you can buy
We have the Vivo X90 Pro, one of 2023’s most interesting Android phones
Forget the Steam Deck — this modded Android phone is a gamer’s dream
This Galaxy S23 Ultra case gives Samsung users a huge iPhone 14 feature