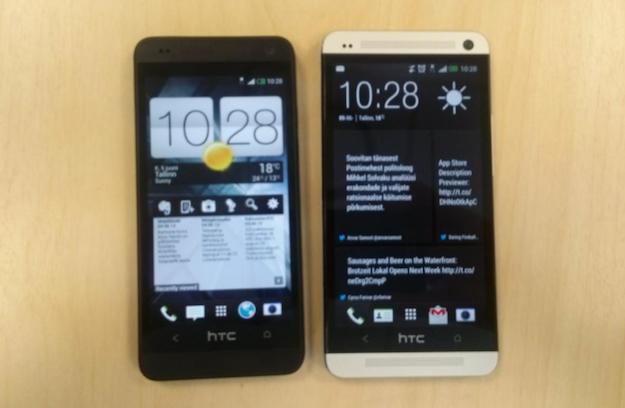 Check out our review of the HTC One Mini smartphone.

Although rumors of an HTC One Mini have already started to spread, they have taken another step forward today, as a series of pictures of the device have been published on an Estonian tech website. It’ll come as absolutely no surprise that it looks like a smaller version of the HTC One, a trick Samsung has recently pulled with the launch of the Galaxy S4’s baby brother, the Galaxy S4 Mini.

The leak also agrees with the specification already leaked, suggesting the phone will have a 4.3-inch touchscreen and a 720p resolution, making it slightly smaller than the HTC One’s 4.7-inch, 1080p screen, and identical to the one fitted to the ill-fated HTC First. An unidentified dual-core processor with 2GB of RAM supposedly powers the phone, and there’s 16GB of storage with which to play.

Apparently, the HTC One Mini will also share the One’s UltraPixel camera, which if true, will certainly put it ahead of other flagship spin-off phones and their feature-cutting ways. The leak concludes with an estimated August release, and a price tag of around 400 euros, which converts over to about $520.

Whether HTC will call the phone, which has previously been known under the codename M4, the HTC One Mini isn’t confirmed, but it does love to re-use the same name over and over again, as evidenced by the endless One X, One S, and One V models from the last few years.

It’s not the only new HTC smartphone on the horizon either, as an even larger version of the HTC One has also been rumored, with a screen somewhere in-between 5 and 6-inches. A tweet sent from the @evleaks Twitter account at the end of May stated the device had the codename of T6, but no other details have come to light so far.

August is never the best month to release new hardware, so we’d imagine September will be more likely, but this does mean a June announcement is a possibility for the HTC One Mini, and perhaps the larger T6 could also make its debut at the same time. We’ll keep you informed.

Video-editing app LumaFusion to get a Galaxy Tab S8 launch
The Galaxy Z Flip 5 might fix the Flip 4’s biggest design flaws
Samsung Galaxy Z Fold 4 is $350 off — no trade-in needed
OnePlus’ new Android update policy matches Samsung, shames Google
Get these JBL earbuds and 4 months of Music Unlimited for $25
We asked the experts if biological sex affects heart rate sensor accuracy
I still love my iPhone 14 Pro, but not for the reason I expected
The best iPhone apps to download in December 2022
Instafest app: How to make your own Spotify festival lineup
How old phones became the cool, good phones in 2022
The best Android apps for December 2022
Don’t listen to billionaires like Elon Musk — app stores are fantastic
The best Samsung Galaxy S22 Ultra screen protectors for 2022