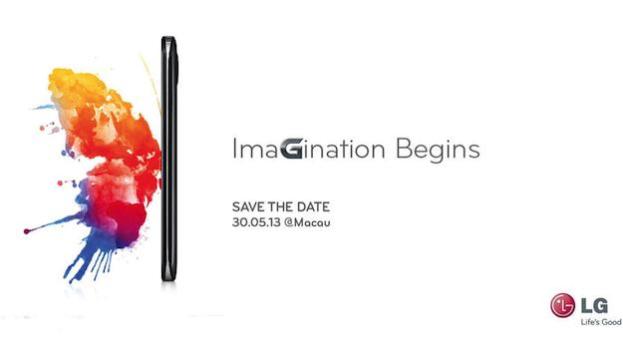 LG has added its name to the list of mobile companies with an announcement to make during May, joining Nokia, Jolla and in its own way, Google too. The image you see above is the invitation to a special event hosted by LG, which will evidently take place in Macau, China, on May 30.

As is obvious, it shows a smartphone from the side, with a burst of color coming from the screen, and the words, “Imagination Begins” next to it. LG has included a not-so subtle clue as to what it’ll be announcing on the big day, as the G in imagination is highlighted and printed in a font which will be familiar to fans of high-end smartphones. We’re going to take a wild stab in the dark and say it’s going to launch a new Optimus G phone.

Of course, this makes us instantly think of the Optimus G2, the rumored successor to the Optimus G, and potentially the world’s first device with a flexible screen. No matter how much we’d like the event to be for the Optimus G2, we don’t think it will be. In April, LG’s European head of mobile communication said the Optimus G2 wouldn’t be coming until after the summer, making a late May announcement very early indeed. He also suggested the Optimus G2 name wasn’t final, meaning the G in the invitation may not be relevant to LG’s future Android flagship phone anyway.

So, if it’s not for the Optimus G2, what will LG reveal? We’re wondering if it’s for yet another version of the Optimus G Pro. Unveiled just before Mobile World Congress in February, we’ve seen a Korean version, a Japanese version, and on May 1, a U.S. version launched. That’s without taking into account the Optimus GK, a variation of the Japanese G Pro headed for Korea.

It’s clear, then, LG has no problem making a big deal about announcing the same phone over and over again. Also, none of LG’s Optimus G phones are listed on LG China’s website, making a local launch of either the G or G Pro a distinct possibility.

Finally, a quick look at LG’s side-view image of the Optimus G Pro, taken from its own website and seen just above, reveals a distinctly similar image to the one used on the invitation. Of course, we’re happy to be proven wrong in this situation, and we’ll still be bringing you all the news from Macau on May 30, but sadly, it looks like the Optimus G2 is going to have to wait.