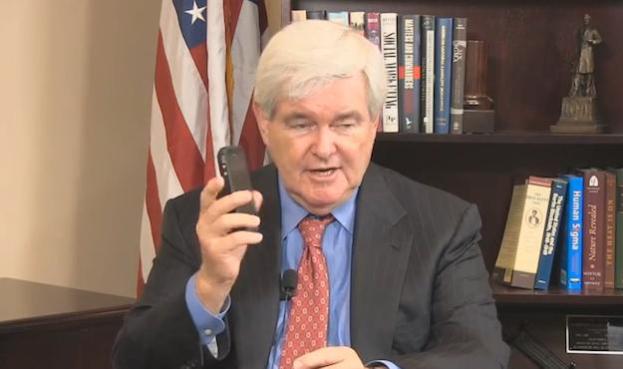 By his own admission, former Speaker of the House and Presidential candidate for 2012, Newt Gingrich, is, “Really puzzled.” When you’re an active politician, faced with issues regarding the economy, diplomacy and law, complex situations must arise on a daily basis; so what could be causing Gingrich’s befuddlement? Why, it’s the cell phone, or rather its name.

Gingrich has published an article and shot an accompanying video entitled, “We’re really puzzled,” where he says Gingrich Productions has spent weeks working out what he should be calling his iPhone. Sadly, it’s not an announcement that he has settled on “Gary” or “Steve,” but rather that the name cell phone is outdated, as the device now does so much more than simply make calls.

He tells us cell phones, “Bear almost no resemblance to your home phone,” and they have the same amount of, “computing power as a 2003 laptop,” which means they can do things that were impossible on a computer 10 years ago. His examples include visiting Wikipedia for free (we’re sure the networks will disagree about that), hold 10-person video chats, watch YouTube videos, and ask your phone, “How do I get home,” and magically be given directions. Apparently, if it can take pictures, tell us where McDonalds is, or let us watch streaming videos, it’s “not a cell phone.”

Gingrich, who has been quoted before on the subject, has been calling these, “New and different” contraptions a, “handheld computer” instead; however, he doesn’t think this is right either, and has tasked his readers, followers, and watchers to come up with a more fitting name for a device with these amazing capabilities. It’s all incredibly easy to mock, particularly as many of us will have been shouting, “It’s a smartphone!” at Gingrich during the video.

However, the real gold comes from the comments on the Gingrich Productions’ website, where suggestions on what we should be calling the “cell phone” are racking up. Here’s a couple of our favorites, several of which are too wonderful not to consider.

How about the, “Electronic fantasy device?” While this does conjure up images of something very different to an iPhone, according to commenter Bill Hart, the best part is this could be shortened to “elefant.” He could be onto something, as let’s face it, who would pass up a legitimate opportunity to use he phrase, “Where did I put my elefant?”

Dale Davis suggests the MAiO. This is (almost) an acronym for Multi-purpose All-in-One, but the A and the O could also stand for Alpha and Omega because the phone is with us at the start and end of each day (stay with us), and the letter I as “apps started with the iPhone,” something which will surprise Microsoft and Nokia. Other inspired names include the Communications Egg, the Rubicon, the Bell-Weather, and the xMind.

However, the winner has to be the, “Handbrain” and I shall be pushing for a filter to be introduced on the site to swap every mention of the word smartphone for it. Google had best watch out too, as Gingrich is one of the chosen ones to test the Explorer Edition of Google Glass, or as he will inevitably call it, a, “Faceworn computer.”