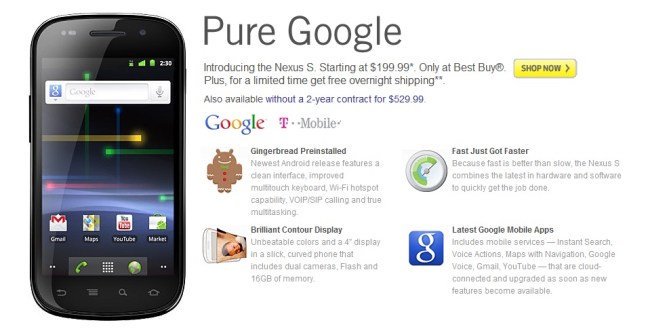 The Nexus S hit Best Buy today, and Google is surely hoping its latest smartphone release can fare better than the Nexus One.

There was initial confusion about the phone’s cost, but we can now clarify that Best Buy lists the Nexus S as $199.99 with a new two-year T-Mobile contract, and Google reports that it’s available without a plan for $529.99. And just to throw in a little something for your prompt business, Best Buy will throw in free overnight shipping for those who order the phone online before December 22.

Some analysts are quick to point out that Google’s pricing plan for the Nexus S is unfortunately similar to that for the Nexus One – and not in any good ways. Some argue that it’s unlikely for many non-T-Mobile consumers to justify upwards of $500 for a phone, even a cool one. Tero Kuttinen, a telecom analyst with MKM Partners, puts it bluntly. “I don’t know what Google is doing here. They do software so well. I don’t understand why they do this hardware strategy in such a half-assed way,” he told Wired.

Kuttinen also points out that the timing could have been better. Multiple retailers have been offering Droid smartphones for pennies or less during the holiday shopping season, and the average consumer won’t be willing to splurge on the Nexus S. He also points out that next month, the competition will really ramp up. “When we get to January, there will be multicore phones and the iPhone on Verizon. That’s the real competition here, not the phones you see right now. For those reason, the Nexus S doesn’t really offer any sizzle.” While there are no official numbers on the phone’s extremely early sales performance, Twitter is being inundated with reports of the device swiftly selling out.

But it sounds like the main issues with the phone have more to do with its marketing and less with its quality. Early reviews of the Nexus S have been generally favorable, with its speed and Android’s latest OS, Gingerbread, winning critics over. And it sounds like partnering with Samsung on the phone’s hardware was a good bet. There are complaints about its lack of HSPA+ and some issues with typing. But it’s first day on shelves hasn’t even come to a close, so the jury is still out on the fate of the Nexus S.

Video-editing app LumaFusion to get a Galaxy Tab S8 launch
Relax, the EU’s scary USB-C rule won’t rob you of fast-charging benefits
It’s official: Apple is required to make a USB-C iPhone by 2024
Waiting for Touch ID on a new iPhone? This report has some bad news
Apple comes clean with what it really thinks about iPhone 14’s Dynamic Island
OnePlus wants your help to plant thousands of new trees
How to remove watch links from the strap on your new watch
Best cell phone plan deals for October 2022
When is the best time to post on Instagram?
Best Google Pixel Deals: $250 off the Pixel 6 Pro
The best Samsung Galaxy S20 deals for October 2022
Best Samsung Galaxy Note 20 deals for October 2022
How to manage all of your Apple Watch notifications