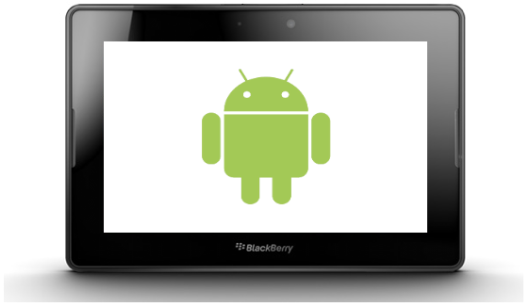 Finally, there’s been some confirmation on a very important PlayBook rumor that’s been around for months now. RIM has officially stated that it will open up the PlayBook for BlackBerry Java and Android-based applications – but of course, it can’t be quite that simple. In a press release, RIM explains that the Android Market itself won’t be operable on the PlayBook. Users will only be able to access Android apps via BlackBerry App World. And there’s another catch: Only specific Android apps will run on the tablet. For now, the PlayBook will only support Android 2.3 apps.

It’s definitely a coup for the PlayBook: A launch that includes a hearty amount of apps is always beneficial, and tying itself to the established Android ecosystem doesn’t hurt. The QNX OS BlackBerry has chosen to use for PlayBook doesn’t have the recognition Google’s mobile OS does, not to mention the sheer number of applications. It also makes the tablet more attractive to developers. While there’s been increasing interest in creating PlayBook applications, it doesn’t have the pull Android does, and now developers will be able to market their programs to both easily due to what RIM describes as “a high degree of API compatibility.”

RIM revealed in its earnings call (via BBC) today that shares fell 12 percent, saying the sagging numbers were caused by “investments in the future.” But good news, as RIM CEO Jim Balsillie also revealed there are “many corporate clients that have approached us about, you know, each wanting tens of thousands, several tens of thousands of PlayBooks.” The PlayBook launches April 19.

Video-editing app LumaFusion to get a Galaxy Tab S8 launch
How to transfer WhatsApp messages from Android to iPhone
The best voice-recording apps for Android and iPhone
These two smartwatches reveal a dark side of Wear OS 3
The best tablets for small businesses in 2022
The best selfie apps for iOS and Android
Experts say the iPhone 14’s satellite feature may have a dangerous side effect
How the Galaxy Z Flip 4 fixed my unhealthy phone habits
iOS 16’s biggest Apple Pay feature might be delayed until 2023
Best iPhone deals and sales for September 2022
Huawei’s Mate 50 Pro is here with an insane 200x zoom
Best Prime Day Deals: What to expect from the October event
Best tablet deals for September 2022