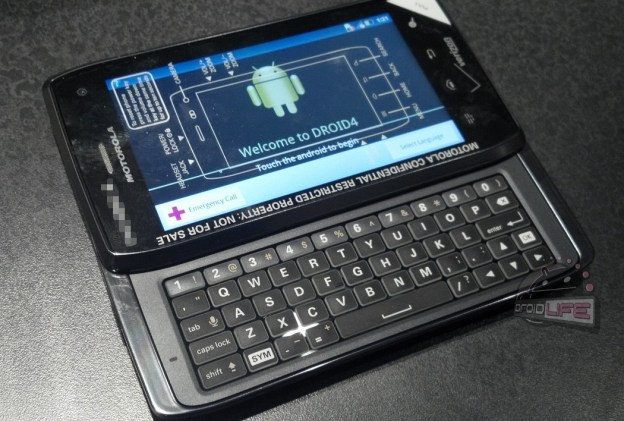 The already crowded Verizon smartphone line up might be getting a few more phones in early December. Droid-Life is reporting that the elusive Galaxy Nexus and the almost unheard of Droid 4 will be released for Verizon on December 8. The report shows a leaked Verizon document displaying the release date for the two LTE phones. Both of the phones will join the Droid RAZR and iPhone 4S as top of the line devices for Verizon’s customers.

There has still been no official word out of Verizon or Motorola about the existence of the Droid 4, so it is surprising that a marque phone would be released without any marketing to date. The rumored specs for the Droid 4 match up very closely with the recently released Droid RAZR. The biggest differences would be that the Droid 4 will have a slide out keyboard and a smaller 4 inch Super AMOLED Advanced display instead of the RAZR’s 4.3 inch display.

We already know pretty much everything about the Galaxy Nexus device, expect the release date and the price. When it was first announced Google said it would be available in the United States sometime in November. Recently we heard that that date has been pushed back to December but no date was confirmed.  The Galaxy Nexus is Google’s latest reference device that will be the first phone or tablet to be launched with the newest flavor of Android, Ice Cream Sandwich.

It is hard to imagine why Verizon would be so secretive about the release of these two devices. The Droid line up has been an anchor in Verizon’s Android line up, and the Galaxy Nexus might be the most anticipated Android phone release in over a year.