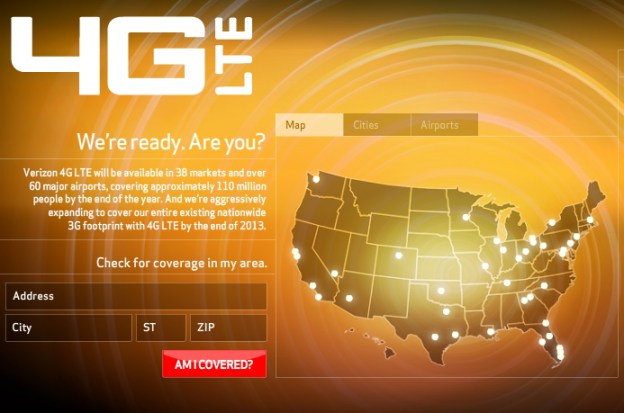 Well that was fast! Verizon announced today that its 4G LTE network now officially covers over half of US citizens. Verizon has added 15 cities to its constantly growing list of covered cities. The newly expanded network now covers over 160 million people in the US.

Verizon first launched its 4G LTE network just eight months ago, and it already covers 150 cities. It seems like just yesterday that we were reporting Verizon breaking the 100 city mark. In the same short time Verizon has also bolstered its line of LTE devices. There are already three LTE phones available, and the Droid Bionic could be released any day now. There might be another LTE Droid joining the ranks after the Bionic, but we haven’t heard too much about the Droid HD yet.

Of the 160 million people covered by Verizon’s LTE the vast majority of them are in highly populated areas. The company’s press release notes that thanks to a few rural networks they were able to cover 2.1 million people in rural areas of the United States. Once all the major cities are covered the real challenge will be to spread coverage to the lesser populated areas.  Sure Verizon has a long ways to go before LTE is truly a technology for everyone to use, but they are well on their way.

Verizon’s 3G network covers 290 million people and it is several years old, so LTE covering 160 million in just eight months is pretty amazing growth.  The company already beat its lofty prediction of reaching 110 million people by the end of the year, and at this rate will smash its goal to match its 3G coverage by 2013.

We are still waiting for the official launch of AT&T’s LTE network, which should be any day now. AT&T will start with service in five cities and hopes to be in 15 cities by the end of the year.

For more information about 4G and which provider is right for you make sure to check our guide to all things 4G.

Samsung’s next foldables are getting more expensive