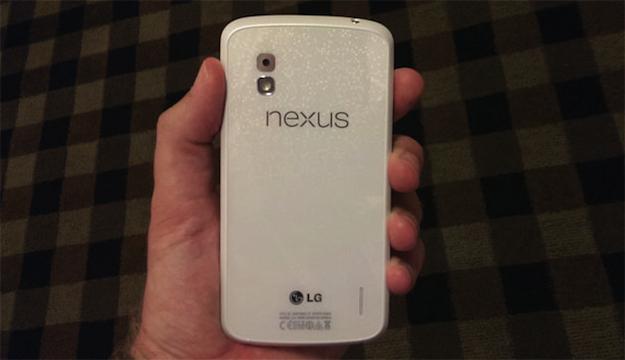 A white version of the Nexus 4 smartphone has been spotted at Google I/O, and according to the Android and Me blog, it’s going to be released soon. This year, Google I/O has been a relatively hardware-free event, with the company choosing to concentrate on software instead. If you’re wondering why it decided not to make any noise about this new Nexus 4, it could be because the phone only differs in color to the version already available.

It has been seen several times before, up to and including a mobile trade show in Dubai this month, which you can see in the video below; yet has never made the jump to become a fully fledged, official device. It’s always been a mystery too, as the Nexus 4 has been out since late 2012. The report’s sources say the phone will be announced very soon, and that it’ll find its way into the Google Play store on June 10. Of course, all this is assuming the report and its sources are accurate.

The Nexus 4 was also featured in a leak which appeared prior to Google I/O’s keynote – which like most of the others, didn’t come true – that suggested there would be an updated version of the phone announced, with LG and Google adding 4G LTE connectivity, CDMA support and a memory boost to 32GB. While the latest leak says the white version is identical to the existing black Nexus 4, that’s not to say these alterations won’t show up in another model.

Furthermore, should the white Nexus 4 be released in June, it could come with Android 4.3 installed, something else which is MIA at Google I/O. Again, assuming Android and Me’s sources are correct, the update will be a minor one, adding Bluetooth Smart support and little else. Google I/O 2013 has delivered very little of what we expected, so for a white Nexus 4 and Android 4.3 to come out after the event instead of during, fits with this year’s contrary style. If the June 10 release is correct, we should known more soon.

Video-editing app LumaFusion to get a Galaxy Tab S8 launch
First Google Pixel 7a renders show a modern, sleek design upgrade
Best Cyber Monday iPad Deals: iPad Air, iPad Pro, iPad Mini
5 things that would make the Google Pixel Fold next year’s best foldable
Surprisingly, the iPhone 14 Pro can’t win this epic camera shootout
Don’t buy the wrong iPad during Cyber Monday — get this one instead
Samsung’s Galaxy Buds earbuds line is discounted for Cyber Monday
Audible Cyber Monday deal drops the price of Premium by 60%
This is your last chance to get 3 months of Kindle Unlimited for just $1
My favorite iPhone MagSafe in-car holders are Cyber Monday bargains
Apple Music Replay 2022: where to find and how to see your listening stats
Hive Social is my favorite Twitter alternative, but that’s not saying much
Instafest app: How to make your own Spotify festival lineup