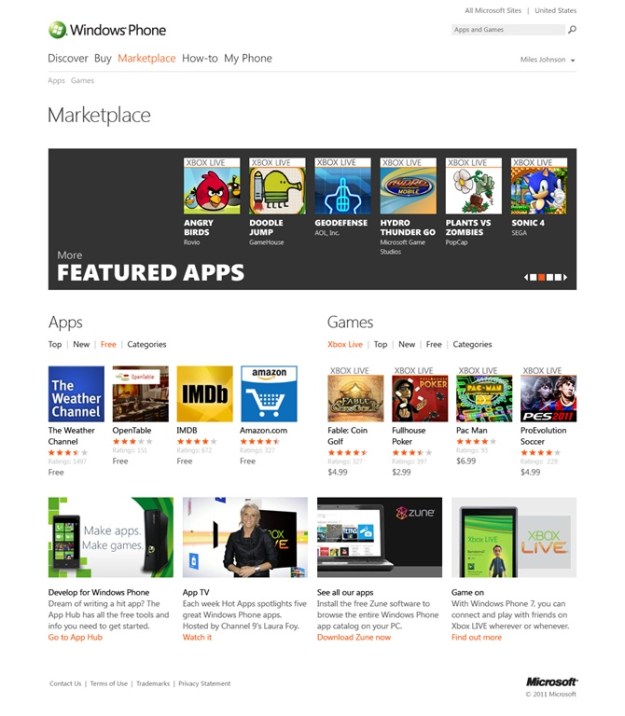 The latest statistics, gathered by All About Windows Phone, show that Microsoft’s mobile application store, Windows Marketplace, has reached a total of 50,000 published apps. The store’s growth has been accelerating since the platform’s launch earlier in the year, increasing by 20,000 since the end of August, and making the jump from 40,000 to 50,000 apps in just 40 days.

Four categories account for 57% of the store’s content with the biggest being “entertainment”, but perhaps surprisingly it’s “books and reference” next, beating “games” down into third place. In fourth place it’s “tools and productivity”. These four are separated by less than 1,000 apps, so it could all change in the future.

The split between paid and free apps is similar to the Android Marketplace and the iTunes App Store, with 58% of WP7 apps available for free, and 29% being paid apps. The final 14% contains free trial apps.

Windows Marketplace continues to grow at an estimated rate of 265 apps per day, however in terms of sheer numbers of available apps, Microsoft is still a way behind Android and iOS.

On a similar note a former Microsoft executive, Charlie Kindel, has commented this week on why he thinks Windows Phone is still lagging behind the competition. Calling Windows Phone a “superior product”, he blames network providers and device manufacturers for not pushing it in the same way they do Android.

End users, he says, “just do what they’re told by advertisers and sales people,” but because networks chose the easy route of backing Android in their ads, WP7 hasn’t had the right level of exposure yet.

He also appeared to say that applications and developers are irrelevant to a platform’s success, but later clarified the statement by saying they were still important, just not to his argument.

Many disagree, with an analyst for Current Analysis summing up the general consensus by saying the 50,000 app barrier is “an important milestone,” and that a large app store could help drive sales forward.