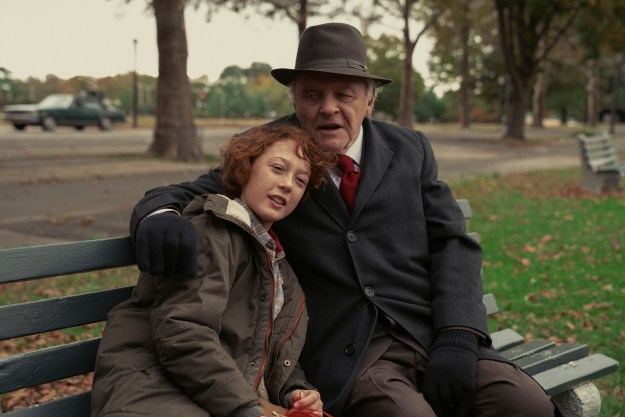 “Armageddon Time is a well-crafted but disappointingly shortsighted drama from writer-director James Gray.”

There’s a gorgeous, grainy texture to writer-director James Gray’s meticulously crafted new film Armageddon Time. Gray, with the help of cinematographer Darius Khondji, has created one of the most visually inviting films of the year. Its soft yellows and hazy, golden hues work in concert with Happy Massee’s perfectly grimy, low-rent production design to create a version of late-1970s New York City that is simultaneously terrifying and inviting. Armageddon Time is, in other words, made with the same, overflowing love that is on display in all of Gray’s films.

But beneath Armageddon Time’s uniquely transfixing veneer is an inescapable emptiness. The story it tells is one of privilege and how coming to terms with one’s personal advantages is a fundamental, necessary part of growing up. That’s an admirably difficult topic for any filmmaker to try to dramatize on screen, but Armageddon Time’s desire to be both a coming-of-age story and a scathing portrait of a specific moment in time leaves it feeling thematically confused. The resulting film is one that tries, unsuccessfully, to split the difference between offering a pat on the back and a shrug.

Armageddon Time begins its story in a classroom. It’s the first day of eighth grade and, within minutes, Paul Graff (Banks Repeta) is being told off and yelled at by his fascistic teacher, Mr. Turkeltaub (Andrew Polk), over a harmlessly silly drawing. Moments later, Paul is joined at the front of his classroom by Johnny (Jaylin Webb), the only Black student in Paul’s class. Johnny, it turns out, already has a long-standing feud with Turkeltaub, who uses Johnny’s troublemaker antics to exercise his own biases. consequence-free.

Their shared love of trouble and hatred for their teacher creates a quick but strong bond between Johnny and Paul. Unfortunately, when a moment of naïve, innocent rule-breaking gets both Paul and Johnny in deep, deep trouble, Paul’s parents, Esther (Anne Hathaway) and Irving (Jeremy Strong), decide to transfer him to the same Trump-funded private school his brother attends. Paul’s enforced separation from Johnny sets off a chain of events that leads to dangerous consequences for one of them and a startling confrontation with the reality of American life for the other.

And therein lies the problem with Armageddon Time. Given the film’s stated themes, story, and setting, it shouldn’t be considered a spoiler to say that Webb’s Johnny ultimately gets in far, far more trouble than Repeta’s Paul ever does. The film’s depiction of how the American justice system routinely treats Black men and boys is, unfortunately, extremely realistic, and that might not be an issue were it not for the fact that Johnny’s fate essentially serves as nothing more than a way to remind Paul of his own privilege.

Throughout the film, Johnny is given little-to-no interiority or personal life outside of his friendship with Paul. While Webb’s performance is quietly luminous and impressively layered, Johnny is never given the chance to ever become anything more than a vessel for the necessary lesson his white friend must learn. That’s a major flaw, one that grievously undercuts Armageddon Time’s themes and leaves the film feeling startlingly shortsighted.

The film’s misuse of Johnny might have been forgivable if Armageddon Time was content to exist as nothing more than a snapshot of a time in American history that remains tragically familiar. However, two of the film’s final scenes attempt to pump life back into its protagonist’s rebellious spirit, first via a ghostly visit and then through a quietly dignified walk home. The former scene invokes a “never stop fighting” perspective that both directly contradicts Armageddon Time’s nihilistic tone and paints Repeta’s Paul as the kind of clichéd, white ally archetype that has been prioritized over Black characters in movies for decades.

None of this is to say that Armageddon Time is without its merits. Aside from the film’s cozy, sumptuous look, it features a scene-stealing supporting performance from Anthony Hopkins as Aaron Rabinowitz, Paul’s grandfather. Hopkins’ tender, clear-eyed turn as Aaron is stunning to watch, and many of Armageddon Time’s best moments are those that center around him. One late-night bedside conversation, in particular, sees Hopkins deliver an impromptu monologue about the history of Paul’s Jewish family in such a devastatingly understated way that it’s impossible not to get wrapped up in the actor’s performance.

That scene also gives Armageddon Time the chance to explore its themes of privilege and persecution without having to rely on Paul and Johnny’s one-note, thinly sketched friendship. It’s such a shame then that Armageddon Time ultimately chooses to drive its points home not by further exploring Paul’s own family, but by making the kind of broad, one-sided statements about America’s racial politics that so many other movies already have. The film, consequently, feels like a major step down for Gray, a director whose films are, more often than not, elevated by the kind of empathy and interest in introspection that is disappointingly absent from Armageddon Time.