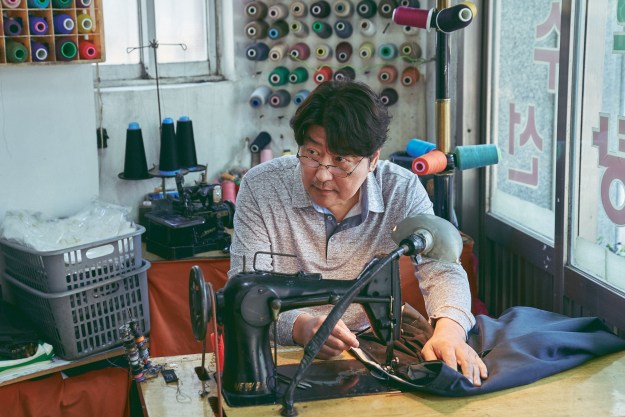 There is no other filmmaker alive who is making better family dramas than Hirokazu Kore-eda. The writer-director has crafted more impeccably written, tenderly captured dramas than almost any other Japanese filmmaker since Yasujiro Ozu. In 2018, he finally earned the recognition he’d long deserved when his haunting portrait of a found family, Shoplifters, was awarded the Palme d’Or at that year’s Cannes Film Festival. Following that film’s release, Kore-eda ventured outside of his native Japan in order to work with legendary French film star Catherine Deneuve on the multinational drama The Truth.

Now, with his latest film, Broker, Kore-eda has once again journeyed out of Japan. The film is the Japanese auteur’s first Korean-language production and has been described by Kore-eda himself as a companion piece to Shoplifters. While Broker never quite reaches the devastating highs of that 2018 film, the two movies do explore similar themes with the same light, gentle hand that has come to define Kore-eda’s work. The new film glows with a kind of radical sensitivity and intimacy, showing that its director doesn’t even have to outdo himself in order to produce one of the year’s best films.

At the center of Broker is Ha Sang-hyeon (Parasite star Song Kang-ho), a dry cleaner who has begun slowly working off his debt to a mobster by stealing babies who are left in South Korea’s baby boxes and then brokering their unofficial adoptions. Helping him in his under-the-table endeavor is Dong-soo (Gang Dong-won), an orphan who works at the very church where Sang-hyeon’s go-to baby box is located. Together, the two men have made a lucrative business out of selecting new families for the abandoned children they find.

Their illegal side hustle is threatened, however, when Moon So-young (Lee Ji-eun), the mother of a baby that Sang-hyeon and Dong-soo kidnapped in the middle of the night, comes looking for her son the next day. Rather than notifying the police about Sang-hyeon and Dong-soo’s brokering, though, So-young decides to travel across South Korea and help them find a new home for her son. The journey that follows is one that, in typical Kore-eda fashion, forces So-young, Sang-hyeon, and Dong-soo to reexamine their views on family, love, and the bonds that connect them.

If there’s a complaint to be made against Broker, it’s that Kore-eda doesn’t manage all of the film’s various subplots and motivations as well as he has in some of his past films. Similar to Shoplifters, the new movie’s plot is so complex that it often borders on being downright convoluted. Several revelations about, for instance, So-young’s past also threaten to break Broker’s gentle dramatic logic. The film’s final act similarly commits to a handful of surprisingly dark twists that, depending on the viewer, may push too hard against Broker’s otherwise tender tone and style of storytelling.

Those who are able to buy into Broker’s carefully composed world of brutal crime and heart-wrenching tenderness will, however, likely find themselves engrossed in another deeply moving portrait of a found family from Kore-eda. Throughout Broker, the filmmaker quietly wrestles with themes of abandonment, guilt, and connection without ever leaning too hard into melodrama or relying too heavily on the movie’s light genre elements.

There are no over-the-top fights or arguments in Broker. Instead, the film’s revelations come to its characters gradually and quietly — forcing them to grapple with their own mistakes and flaws without ever punishing them too harshly for them. As is the case in so many of Kore-eda’s films, it’s ultimately the deep connections that form between Broker’s central characters that provide the enlightenment they need. That’s particularly true in the relationship that forms between Dong-soo, an adult orphan who still struggles with his own issues of abandonment, and Moon So-young, a young mother who believes she’s no longer capable of raising her child.

Both Lee and Gang shine in their roles as So-young and Dong-soo. The pair portray their respective characters’ internal turmoil and conflicts without ever overdoing it or bringing them too far above the surface, which allows Broker to only further highlight the small ways in which our emotions can shift and evolve over time. Lee, in particular, impresses as So-young, a character whose purposefully cold exterior is given the chance to slowly, almost imperceptibly crumble over the course of Broker. Her arc culminates in a Ferris wheel-set scene with Dong-soo that is among the most emotionally compelling that you’ll find in a film released this year.

Song Kang-ho, meanwhile, turns in yet another quietly revelatory performance as Sang-hyeon, a man whose overly practical personality perfectly masks the rough-edged kindness that stirs within him. Kang-ho, who has long been regarded as one of the world’s best actors, proves to be a perfect leading man for Kore-eda, a director whose subtle, intimate style of storytelling seems uniquely well-suited for the performers featured in Broker. All three members of the film’s central trio in turn match Broker’s quiet, contemplative energy and do just enough to elevate the film’s emotions without ever going so big that they break its fragile dramatic tension.

While Broker isn’t quite as endlessly, perfectly composed as some of Kore-eda’s previous efforts — namely, 2008’s Still Walking — the director’s visual sensibilities are, nonetheless, on display from the film’s first frame to its last. Here, Kore-eda brings his keen visual eye to some of South Korea’s major metropolitan and coastal cities, creating a portrait of urban nightlife and oceanside calm that ensures that Broker fits in well with its director’s past films. Kore-eda, in specific, continues to have a brilliant eye for combining multiple textures within the same compositions.

That skill is particularly apparent during one notable scene in Broker in which Soo-jin (Bae Doona), a police detective who is looking into Sang-hyeon and Dong-soo’s illegal adoption service, takes the time to have a quiet phone call with her partner. The scene places Soo-jin firmly on the right side of the frame and behind several visual layers, including the hood of her car, her rain-streaked windshield, and her windshield wipers. The image’s use of rain, Soo-jin’s car windshield, and the city lights that shine off-screen come together to create an image that seems simultaneously simple and multifaceted.

The same is true for Broker, which is so well-calibrated and innocuously presented that you don’t realize just how layered it is until you’re already so submerged in its world and story that any questions about the film’s logic are rendered meaningless by the emotional weight of it.

Operation Seawolf review: nice Nazis? No thanks!
Amsterdam review: An exhausting, overlong conspiracy thriller
Significant Other review: a scary kind of love
Werewolf By Night review: magnificent monster mayhem
How to legally bet on the 2023 Super Bowl online
Apple’s MLS Season Pass is about more than just streaming games
Everything leaving Netflix in February 2023
Where to watch Skinamarink
6 movies coming in February you need to watch
5 actors who should be Batman in The Brave and the Bold
The Boogeyman trailer: don’t look under the bed
The best movies on Disney+ right now (February 2023)
The 10 most popular TV shows on Netflix right now