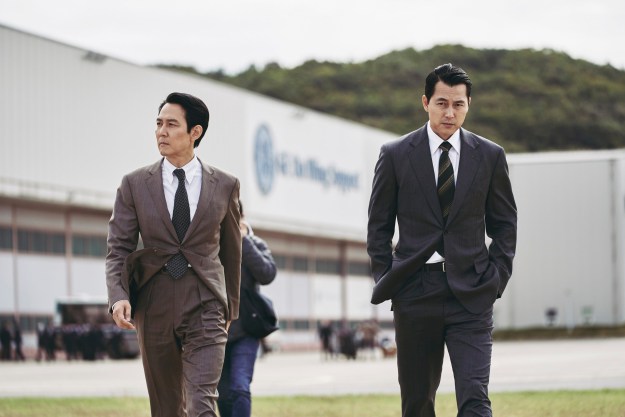 “Lee Jung-jae announces himself as a filmmaker worth paying attention to with Hunt, a pulse-pounding spy thriller that suffers primarily from its own overly convoluted and confusing plot.”

Hunt is, to put it mildly, an ambitious film. The new South Korean drama is a spy thriller set during the 1980s that follows the perspectives of two security officials as they try to determine the motives of the other. Structurally and narratively, the film bears more than a few similarities to similar double-agent thrillers like The Departed and Infernal Affairs. In terms of its visuals and scale, however, Hunt is built more like a blockbuster thriller in the same vein as films like The Bourne Ultimatum or Argo.

That’s a difficult balance for any film to attempt, especially one that’s helmed — as Hunt is — by a first-time director. It’s a wonder then that Hunt works as well as it does. Under the direction of Squid Game star Lee Jung-jae, who also appears in the film as one of its two leads, Hunt is a breakneck, unpredictable spy thriller. Over the course of its 131-minute runtime, the film’s story often wobbles and shakes beneath the weight of its own convoluted ambitions, but it never falls apart.

The fact that Hunt doesn’t ever fully crumble is a testament to not only the film’s engaging visual style, which feels heavily indebted to well-known auteurs like Paul Greengrass and Park Chan-wook, but also its relentless pace and well-choreographed set pieces. Those who make it through the film’s many unnecessary twists and confusing detours will likely find themselves taken aback by the power of Hunt’s surprisingly satisfying final third.

Based on a screenplay by Lee and Jo Seung-Hee, Hunt opens in absolute chaos. The film’s first sequence follows Park Pyong-ho (Lee), the Foreign Unit chief of the Korean Central Intelligence Agency, and Kim Jung-do (Jung Woo-sung), the KCIA’s Domestic Unit chief, as they and their team members all scramble to stop an assassination attempt on South Korea’s president. Throughout the sequence, they race through the streets and buildings of a 1980s version of Washington D.C. that has been taken over by protests.

As far as opening sections go, Hunt‘s quickly establishes its relentlessly fast pace, which it maintains for the entirety of its runtime, as well as its frenetic, primarily handheld visual style. Unlike many Paul Greengrass imitators, though, Lee never disregards his audience’s sense of geography or continuity merely for the sake of heightening the film’s chaotic aesthetic.

Hunt‘s action sequences, including its opening assassination attempt in D.C., are all comprised of quick cuts and handheld shots, but it’s thanks to Kim Sang-Bum’s precise editing that they never become incoherent or mind-numbingly confusing.

The same cannot be said for Hunt’s plot, which contains so many layers and false leads that it would be difficult to keep track of even in a film that didn’t move as fast as it does. However, Hunt moves at a shockingly brisk pace from start to finish and frequently delivers key pieces of information in such a quick, offhand manner that it can become easy to get utterly lost in the film’s web of secrets and lies. Those who pay close attention will likely be able to stick with the film, even in the moments when its story becomes too confusing and twisty for its own good, most of which come during Hunt’s bloated second act.

In its desire to be as bombastic and action-packed as possible, Hunt’s climactic sequence also revolves around a few too many twists. The scale of the film’s final set piece, in specific, becomes too unwieldy for its director and editor to handle, and it introduces the kind of shoddy CGI effects that are absent from the rest of Hunt. Even when it seems like Hunt is veering dangerously close to going off the rails, though, the film manages to correct itself with a final 10 minutes that are not only shocking, but also admirably acidic and bittersweet.

Hunt is further grounded by the lead performances given by Lee and Jung. As the film’s rival security chiefs, both actors are saddled with the unfortunate responsibility of having to conceal many of their characters’ motivations and suspicions while still giving performances that feel real and multidimensional. Fortunately, Lee and Jung manage to pull that tricky task off, delivering performances that feel distinctly drawn and conflicted in ways that help firmly root Hunt’s convoluted narrative in their characters’ opposing perspectives.

Hunt’s successes ultimately prove just how strong of a film Lee could direct should he ever manage to get his hands on a script that’s a bit tighter and cleaner. As it is, Hunt is a largely impressive directorial debut, one that establishes Lee as a surprisingly confident and technically proficient filmmaker. It’s an adrenaline-fueled slice of genre filmmaking that never quite reaches greatness, but still delivers a ride that is never anything but entertaining and enthralling.

Hunt is now playing in theaters and on demand.

Operation Seawolf review: nice Nazis? No thanks!
Amsterdam review: An exhausting, overlong conspiracy thriller
Significant Other review: a scary kind of love
Werewolf By Night review: magnificent monster mayhem
The 10 most popular TV shows on Netflix right now
Where to watch Jurassic World Dominion
The 10 most popular movies on Netflix right now
5 upcoming horror movies you have to see in 2023
The best MCU fights, ranked
2023 Oscars: where to watch all the Best Actor nominees
Where to watch Everything Everywhere All at Once
2023 Oscars: where to watch all the Best Actress nominees
The best supervillain deaths in movies, ranked