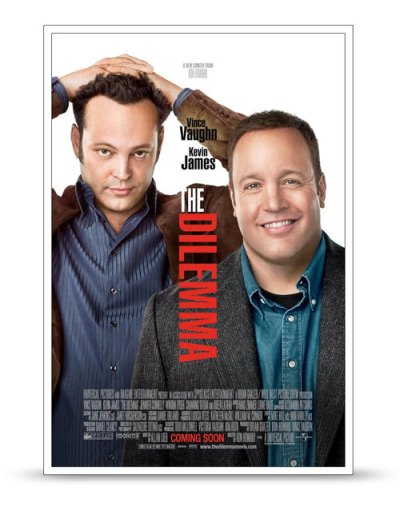 The Dilemma is what happens when too many talented people are stuck writing a movie intended to be “mass market.” The characters and emotion are real, but Director Ron Howard and Writer Allan Loeb are trying to stick a dramatic film into the flimsy framework of a modern romantic/bromantic comedy. The result is a dilemma itself: do we forgive The Dilemma for being a comedy that’s too serious or a drama that skimps on the details for a few laughs?

What would you do if you caught your best friend’s wife having an affair? It’s a tough situation. You could confront your friend and tell him the bad news; you could try to talk to his wife first; you could try and get proof; you could just ignore it. There are a lot of options, but I’m betting you think you’d just tell your friend the bad news. Well, what if you and your best friend are in business together and about to give the presentation that could make or break your careers? If you tell your friend, it could ruin his state of mind, and ruin the deal. This is Ronny Valentine’s (Vince Vaughn’s) dilemma.

Ronny Valentine has always idolized the relationship between his best friend Nick Brannon (Kevin James) and his wife Geneva (Winona Ryder). Ronny’s taken the long road and had some setbacks, but is finally ready to settle down with his girlfriend Beth (Jennifer Connelly). He has it all planned out: he’s going to propose in a fancy garden at a hotel with some smooth grooves playing from his iPod; it’s going to be amazing. He even has Herbert Trimpy, played by Howard’s brother Clint Howard, on call to help him make the moment extra special. But just as he begins assessing his space, he accidentally catches a glimpse of Geneva making out with another man. And not just any man: a guy named “Zip,” played by Channing Tatum, who seems to capture the hearts of ladies in every film by looking like he just flew back from active combat.

Ronny considers telling Nick about Geneva’s loose lips immediately, but holds off, afraid that it might distract his partner. You see, the two of them have just started a new automotive design business together. Nick is the brains and Ronny does the talking. But without focus and a clear head, Nick might not make the many arbitrary deadlines in the days ahead and their big deal with General Motors might fall through. The deal: to make an electric car sound like a muscle car…dumb, I know. Basically, they need to stick a giant subwoofer and speaker into the hood of a new car, but you’d think they were building the car from scratch with all the setbacks and smoke.

The entire business aspect of The Dilemma is paper thin. It’s there to add another layer of doubt to Ronny’s situation and provide the deadlines the plot needs to trudge forward. Queen Latifah even joins the fun in scenes here and there. With no real role to play, she mostly pals up to the guys and tries to provide inspiration, but she feels more like a leftover from a script that tried to evolve after contracts were signed. Fortunately, though Latifah’s character has no depth, the rest of the gang is surprisingly interesting.

Ronny: Vince Vaughn plays his normal fast-talking, quick-witted self and pulls in all the laughs in the film, but he has a maturity to him that we haven’t seen before. As much as he fights it, Vaughn is getting older and growing up. Though he still makes us smile, mostly we feel for Ronny. He’s stuck between that metaphorical rock and hard place. He makes some terrible decisions, but does so out of love for Nick and respect for his marriage.

Geneva: Ryder is cunning and supremely manipulative as Geneva. When confronted by Ronny, she shows a faint fear, but is frighteningly cold when defending her infidelity. As she did in Black Swan, Ryder shows she is more than a capable actress. If only she had more opportunities like this to show her range.

Beth: Then there’s Beth. She cares for Ronny more than he’ll let her. Connelly has certainly come a long way since Labrynth. Like Ryder, she hasn’t been able to grab many interesting roles in recent years, but you wouldn’t know it from her performance. Beth desperately wants Ronny to open up and let her in, but as much as he thinks he’s ready for marriage, he is routinely unprepared to share his burdens with her.

Nick: Kevin James, well, he plays Kevin James, but with a little more sincerity. He’s there to get upset and work on the car, but he isn’t exactly the lovable goof we’re used to seeing. Paul Blart makes no appearances in The Dilemma.

Zip: Hell, even Channing Tatum’s character is more fascinating and unpredictable than you may imagine. Sure, he looks like a meat head, but he’s just as much a victim as anybody.

Not a comedy, but not a bad movie

Does this sound like a situational comedy to you? The problem with The Dilemma is the same problem Allen Loeb’s last comedy, The Switch, had. That film has Jason Bateman meeting his son for the first time after seven years. Both films have a remarkable emotional core that’s quite touching, but both are confined by studio formulas that demand that romantic comedies have less depth than their tagline. Loeb is skilled at bringing depth out of flat ideas and instilling his scripts with a very touching resonance, but he needs to be set free.

Ron Howard is in much the same boat. He’s too good a director to make a comedy out of this film, but is trapped by the genre Universal assigned this film. Yet, somehow Howard manages to capture Vaughn’s energy and harness it for more than comedy. He uses an interesting flashback technique to enhance the intensity of Vaughn’s monologues. Instead of simply letting him ramble, Howard shows us what Ronny is speed-talking about as he’s doing it. It is both funny, like when he makes up a story about helping some fat kids get a ball to explain his encounter with a poisonous plant, and haunting, like when he looks at Geneva and continually sees a flashback of her kissing Zip.

I cannot recommend The Dilemma if you are looking to have a lighthearted evening. It has some great laughs, but they are few. I can, however, recommend it if you’re hoping to see a good movie about a difficult subject. Unfortunately, The Dilemma comes with some baggage, namely some boring subplots stuck in there for formula’s sake. If you can look past its shortcomings, there’s definite enjoyment to be had. The dilemma is: can you?

It’s marketed as a comedy, but has few laughs. Aspects of the plot feel forced.

The 10 most popular movies on Netflix right now
Hugh Jackman and Ryan Reynolds will reunite for Deadpool 3
Vernon Davis on post-NFL life and transition into entertainment
If you have a Netflix subscription, don’t sleep on the service’s games
Blonde review: a striking and tough Marilyn Monroe biopic
Rotten Tomatoes teams with Cryptozoic to launch card game
Bros and the modern LGBTQ+ rom-com
New Amazon Fire TV Omni QLED displays art, senses your presence
Tales of the Walking Dead is a refreshing take for the zombie franchise
How to get Dolby Atmos on Netflix
How to add an app to a Vizio smart TV
Best movies to second screen
Niecy Nash on honoring the legacy of Glenda Cleveland in Dahmer