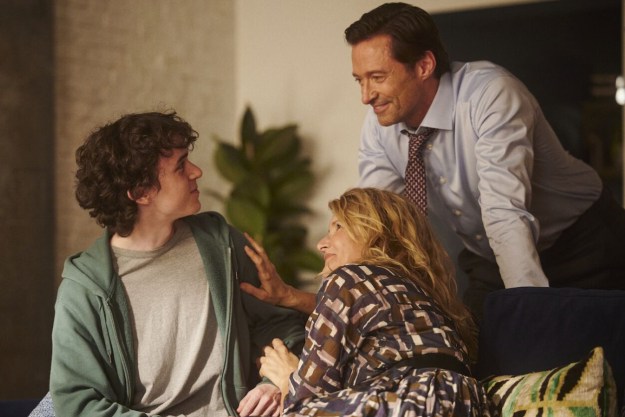 “The Son strives to be a devastating and insightful family drama, but it ends up feeling more like a shallow, emotionally manipulative exploration of misery.”

The Son wants you to feel things — namely, regret, heartbreak, sorrow, and helplessness. Despite featuring a handful of talented and very game performers, though, the biggest feeling The Son creates is frustration. The film elicits such a reaction through not only the deeply flawed ways in which it tells its story but also through the myriad of easily avoidable creative mistakes that its filmmakers make across its laborious 123-minute runtime.

What’s even worse is that there’s no reason to go into The Son expecting it to be such an inauthentic, blatantly manipulative drama. In 2020, its director, Florian Zeller, managed to create a far better film with The Father, which was, like The Son, adapted from one of Zeller’s plays and even explores a similar tale of familial strife. Unfortunately, all the missteps that Zeller could have made in The Father he ends up making in The Son — resulting in a film that’s not heartbreaking so much as it is intensely irritating.

To Zeller’s credit, The Son doesn’t struggle to feel cinematic in the same way so many previous stage-to-screen adaptations have. While most of the film takes place in one New York apartment, Zeller and cinematographer Ben Smithard succeed at making the space feel expansive enough that The Son’s scope doesn’t ever feel theatrically restricted. Zeller, in fact, makes great use of the film’s central space from its opening scene, which follows Peter (Hugh Jackman), a remarried man, and his second wife, Beth (Vanessa Kirby), as they receive a surprise visit from his ex-wife, Kate (Laura Dern).

The conversation that follows effectively establishes the tension and history that exists between Beth, Peter, and Kate, and it also succinctly sets up The Son’s story. Kate, it turns out, has been forced to ask Peter for help with their teenage son, Nicholas (Zen McGrath), whose resistance toward his mother and proclivity for skipping school has grown too intense for Kate to manage on her own. Peter, in response, pays a visit to his son and it isn’t long before he’s letting Nicholas move in with him, Beth, and their newborn son. For most of its 123-minute runtime, The Son subsequently follows Peter as he unsuccessfully tries to reconnect with his firstborn son and, even more importantly, fails to acknowledge the severity of Nicholas’ depression.

As simple as its story is, The Son struggles to maintain a sense of momentum or tension throughout its first and second acts, which feature long sections that are not only repetitive but often dramatically inert. While the film’s dialogue does manage to occasionally capture a sense of raw naturalism as well, it’s often hurt by its own stilted language. The characters in The Son call each other by their first names so often, for instance, that an unintentionally cold distance is created between characters who shouldn’t, at the very least, feel the need to talk in such an awkward, overly formal manner.

Most of the film’s actors manage to overcome The Son’s strangest quirks fairly well. Hugh Jackman, in particular, turns in another emotionally intense performance as Peter, a man whose own faults and pride make him blind to the complexity of his son’s despair. Laura Dern similarly shines as Kate, a woman whose kindness and warmth can be overwhelmed at times by the feelings of abandonment that her husband and son’s departures have left her with. Jackman and Dern don’t get to share many scenes in The Son, but the film often works best when they’re on-screen together.

Vanessa Kirby and Zen McGrath fare less well throughout The Son. While Kirby’s talent has been well established at this point, she’s left more or less stranded throughout The Son in a role that feels underwritten. McGrath, meanwhile, is given the difficult task of playing a character who, thanks to Zeller and Christopher Hampton’s screenplay, essentially oscillates between seeming either emotionally distraught or blank. McGrath’s performance, consequently, mostly comes across as flat, a fact which undercuts many of The Son’s biggest emotional moments.

All of these flaws, unfortunately, don’t come close to matching the severity of the mistakes Zeller makes in The Son’s third act. Rather than trusting in the dramatic power of the film’s story, Zeller resorts to the kind of emotionally manipulative gimmicks that rob The Son of any of the weight it had previously built up. The film ultimately feels less like an exploration of a complex issue and more like a superficial exercise in generating misery — one that hopes its audience’s empathy for its subject matter will make up all for the cheap tricks it employs in order to weaponize its viewers’ own sincerity against them.

Not only does The Son fail to put you in the same emotional headspace as its characters, but it fails, even more severely, to make any of their emotions feel real at all.