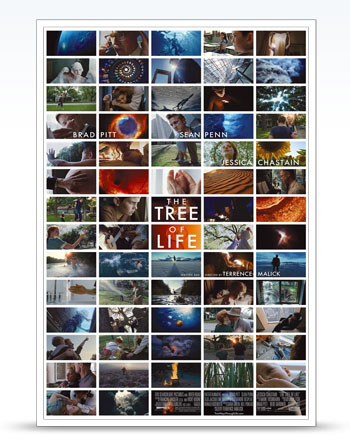 I doubt that there has ever been a director who epitomized the divide between critics and audiences quite as much as Terrence Malick. His films are considered by many critics to be cinematic masterpieces. They are art, and high art at that. His films are designed to challenge you and make you think, while tapping into an emotional reservoir with the heavy use of symbolism. Critics love him. They fawn over him and hurl awards at him like a ninja throwing shurikens. And yet most audiences have a slightly different view — they hate him with a burning passion.

Terrence Malick is the king of the art house crowd. If you happen to see The Tree of Life listed on a giant, new, state-of-the art megaplex banner next to X-Men: First Class and Super 8, that theater is doing it wrong. Instead you should look for The Tree of Life in a theater that specializes in indie releases. So if that isn’t your thing, avoid The Tree of Life like the plague. In fact, unless you are a film critic (not to be confused with a movie reviewer), an art-house fanatic or a film-school student or alumni, you should probably do yourself a favor and avoid this film.

If someone were going to make a parody movie about a film designed to be art, The Tree of Life would be the first film to watch as research. I know I am in the minority of critics with my take on this film, and I may need to turn in my imaginary critic card but it’s true. For every deeply symbolic moment, there is a cliché attached. Characters staring longingly out of windows? Check. People walking on a beach? Check. A guy falling to his knees overcome by emotion? Check. Whispered voice overs? Check. Random images of dinosaurs? Che — wait…

I get what Malick was trying to do, I really do. In some ways it is admirable. But trying to create art for the sake of art is a disaster waiting to happen.  Film critics who are intimately familiar with the medium may appreciate the intentions and deeper meanings buried in Tree of Life, but they remain a narrow cross section of viewers. Most will start watching a movie about a family, then be surprised when the film veers off into a brief CGI history of the universe, then wonder what the hell a dinosaur is doing in a film, before coming to terms with a family drama that is built entirely on brief moments and not the story.

The Tree of Life is an ambitious, but ultimately pretentious work of art from someone that considers themselves an “artiste.” This film was envisioned as art first and a movie second. Everything is done well — masterfully at parts — and there are moments that will impress the biggest cynic. But while this move may at times be brilliant, it sure isn’t entertaining.

The Tree of Malick

Describing the story of The Tree of Life is a daunting task.  Two thirds of the film follows a family living in Waco, Texas during the 1950s dealing with an overbearing father, a subservient mother, and a trio of kids — one of which will grow up to look back at his life reflectively and try to resolve festering issues. The other third is a CGI-based look at the origins of the universe starting with the Big Bang, featuring the formation of the galaxy, stars, dinosaurs and the history of Earth. The story is what you make of it, and 10 different people could leave with 10 different interpretations.

The tour through the galaxy is part 2011: A Space Odyssey when Bowman enters the Monolith, and part a local Omnimax presentation minus the overly enthusiastic presenter declaring things like “Behold, the Big Bang!” The family drama (which features a nameless family identified in the press release as the O’Briens), primarily focuses on Jack, one of three brothers who grows up to become Sean Penn.

The movie actually begins sometime in the 60s, when Mr. O’Brien (Brad Pitt) and Mrs. O’Brien (Jessica Chastain) are informed of the death of their 19-year-old son. Which son it is, and how he died are never mentioned. When not giving us a trippy tour of the galaxy, the movie jumps between two times: one with a present day Jack (Penn), which is the briefest of all the sections, and the other in the 1950s Waco, Texas where the majority of the film focuses.

Trying to nail down the plot of The Tree of Life is like trying to describe the plot to a live football game. The plot is not the focus. It is not linear, and there is no traditional structure to it. Instead, the film focuses on events. Some are major, like a family argument that nearly devolves into domestic abuse. Others are much more subtle and include things like young Jack playing with his friends, and his occasionally tense moments with his dad, an accomplished organist who gave up his dreams of a life as a musician. Mr. O’Brien is stern and believes that his harsh treatment of his children is for their own good, even as his kids grow to resent him for it and begin to question their mother for accepting it.

The older Jack is caught in a different type of world, floating through his life unable to shake some of the ghosts of his past. And then he ends up on a beach… because beaches are very symbolic. And there’s a door, and people from his past, and lots of other things that are meant to connect the ideas of a lifetime laid out before Jack. Its impossible to consider this part of the story really, partly because it is all done through symbolism, and partly because it doesn’t make any sense — not the symbolism, that is almost heavy handed. As Jack wanders on the beach carrying the burdens of his life, things change for no reason at all, and resolution comes because it is that time in the movie for it to come.

The Tree of Life operates under the logic of a music video, where things are inferred and implied, but never discussed. It will either make total sense and send your spirits soaring, or leave you wondering what the hell Malick was on.

One undeniable plus in Malick’s work is his ability to generate exceptional work from his cast. Pitt turns in what is easily among the best roles of his career as the complicated father, while Chastain has a breakout performance as Mrs. O’Brien. Hunter McKracken, who plays the young Jack, is also a standout in a deeply difficult role for a child. You cannot fault the performances in The Tree of Life. Even the CGI dinosaurs are good.

The direction, like the story, is hard to pin down because it is not trying to be like anything you have seen before or can easily compare it too. The cinematography is very good — stunningly beautiful at times — while the camera has a life of its own. At times it is distracting, but it is almost a character in itself. Although the quick zooms and close up pans around the actors again feels like a parody of art films, there is a sense of deliberateness to it. It is exactly what Malick wanted from the film, so you can’t fault it on a technical level.

If nothing else, you have to admire Malick’s mastery of the art of film. You don’t have to like it, but he knows what he wants and shoots every shot with care. If there is an odd lighting effect or a bizarre angle, you can generally assume that it is intentional. Even when it is disconcerting and bizarre.

The Tree of Life is a pretentious, bloated film that is done by an artist who knows that he is an artist and is making a film for the sake of art. There are flashes of brilliance buried in the movie. The acting is exceptional, which gives light to a few scenes that stand out. They are brief and generally contained, like a single verse from a longer epic poem, and like poetry, they are designed to illicit a response based on the emotional resonance of the symbolism.

A sense of spirituality is sprinkled throughout the film that attempts to connect the idea of the origins of life with the Big Bang to a Texas family in the 50s, but there is nothing really there to hold it together. It is the crust of an idea that has nothing under it. There is such an emphasis on the visual styling and the quick cuts of life that the film feels fractured and disjointed. Instead of building to a stunningly beautiful meaning or idea, it is the representation of one man’s — Malick’s — personal vision. Unfortunately he is unable to congeal the disparate images and thoughts into anything coherent.

The Tree of Life is a film with a definite glimpse of beauty and brilliance that wallows in a self-important sense of artistic endeavor. It comes across as a parody more than once as it runs down a checklist of things you might expect form an “art house” movie. Terrence Malick made the movie he wanted to make, and you have to applaud his determined push toward the abstract. It is new and original, and what he intended to release. He wanted to create art for himself, and he did. It just would have been nice if he had tried to create art for the rest of us too.