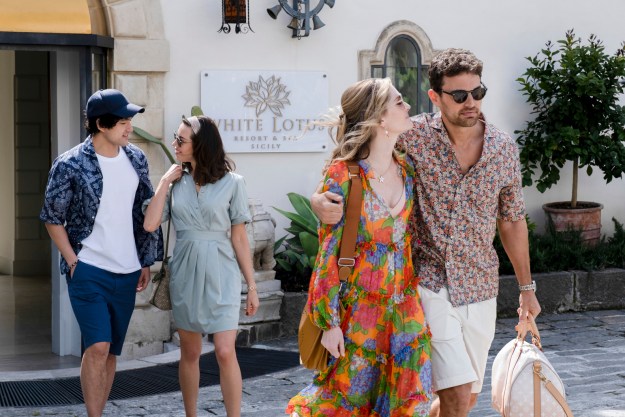 “The White Lotus season 2 delivers a story that is far more complex and emotionally charged than viewers might expect.”

The White Lotus season 2 is a sun-soaked, often hilarious season of television. It is, in other words, a worthy follow-up to the show’s acclaimed and wildly popular first season. The series, which was made in order to fill a pandemic-shaped hole in HBO’s programming lineup, was never meant to be anything more than a one-time thing for both HBO and its creator-director Mike White. However, when The White Lotus season 1 went on to become an unexpected hit for the network, White and HBO quickly committed to bringing the series back for, at the very least, one more season.

In order to do so, White has turned The White Lotus into a semi-anthological series, one which follows a different group of rich, self-obsessed hotel guests throughout their shared stay at one of the resorts owned by the show’s eponymous hotel chain. The White Lotus season 1 largely kept its cast within the confines of its central Hawaiian resort and used its setting to explore matters of privilege and wealth in various observant, often cringingly accurate ways.

The White Lotus season 2, meanwhile, sees the show relocate from Hawaii to Italy and turn its attention to how wealth can often affect both romance and sex. Despite its new setting and thematic ideas, though, the perfectly chaotic opening scene of The White Lotus season 2 confirms that White hasn’t just brought back the same vacation-based model of the show’s debut season but also its loose, playful murder-mystery format.

The White Lotus season 2 doesn’t let its new location or story stop it from opening in an extremely reminiscent way. The season begins in practically the same manner that the show’s debut does, first with a flash-forward that promises a future murder and then with the arrival of the show’s central guests via a glamorous boat ride. Throughout the premiere’s remaining minutes, we’re introduced to The White Lotus’ next round of eclectic characters, including Harper (Aubrey Plaza) and Ethan (Will Sharpe), a married duo who have embarked on their first couples’ trip with Ethan’s former college roommate, Cameron (Theo James), and his wife, Daphne (Meghann Fahy).

The season’s other characters include Bert (F. Murray Abraham), Dominic (Michael Imperioli), and Albie Di Grasso (Adam DiMarco), who have journeyed to Sicily in the hopes of exploring their family’s Italian roots. Jennifer Coolidge’s Tanya McQuoid-Hunt, meanwhile, rounds out the main tourists of The White Lotus season 2 as the only major, returning character from the show’s first season. She’s joined this time by Portia (Haley Lu Richardson), her listless assistant, who quickly forms an ill-fitting connection with DiMarco’s Albie.

When they’re introduced in the season’s premiere, all of The White Lotus’ new and returning players are struggling through relationship problems of their own. The season’s first five episodes, which were the only installments that critics were given early access to, then follow them as the messiness of their personal lives slowly but surely spreads out and intertwines with the lives of their fellow guests. Of course, at the center of all of The White Lotus season 2’s subplots is money, which creates, ruins, and overly complicates many of the season’s core relationships.

Those issues are only exacerbated by the presence of Lucia (Simona Tabasco), a local Sicilian prostitute who is first hired by Imperioli’s Dominic but quickly starts making her rounds through many of his fellow guests. Tagging along for the ride is Mia (Beatrice Grannò), Lucia’s friend, who slowly begins to see the transactional appeal of Lucia’s profession. The way in which both girls slowly ingratiate themselves into the lives of The White Lotus season 2’s tourists has a screwball edge to it that would likely come across as purely comedic were it not for the bloody fate we know awaits, at the very least, one of the show’s characters.

The same can be said for much of The White Lotus season 2, which isn’t nearly as cringeworthy or outright farcical as its predecessor. As a whole, the series’ sophomore season is less concerned with the class differences that separate the guests and staff of the White Lotus and more with the self-destructive impulses that vast wealth not only promotes among the world’s rich elites, but also protects them from experiencing the consequences of. In the case of Plaza’s Harper and Sharpe’s Ethan, the wealth they’ve gained from the sale of Ethan’s tech startup has created an identity crisis within each of them that is quickly exploited by, specifically, James’ Cameron.

Harper’s desire to constantly compare her and Ethan’s marriage to Cameron and Daphne’s is only made more toxic by the financial statuses of both couples. Her slow but sure disintegration is one of the season’s more compelling and engrossing subplots, if only because it allows Plaza to maximize the effect of her usual intensity. Elsewhere, The White Lotus season 2 struggles throughout its first few episodes to give Coolidge’s Tanya a storyline that’s truly worthy of her self-involvement and obliviousness. Her arc picks up considerably, however, when she crosses paths with Quentin (Tom Hollander), a gay, British expat whose self-awareness makes him both a perfect friend for Tanya and a warning sign.

Portia and Albie’s friendly but ultimately flat relationship similarly struggles to make much of an impact, so it’s no surprise when White decides to wisely abandon it halfway through The White Lotus season 2. Richardson remains one of the most likable and versatile young actresses we have working today, but Portia’s storyline only truly begins to pick up once she ditches Albie in favor of flirting with Jack (Leo Woodall), a handsome British guest she meets during one of Tanya and Quentin’s beachside hang out sessions. Albie, notably, also becomes a much more interesting figure once White decides to pair him up with Tabasco’s more confident Lucia.

The unevenness of some of the season’s storylines, some of which take several episodes to actually get going, leaves it feeling far messier than the series’ first. However, even if it often feels less precise than its debut, The White Lotus’ second season is never anything but entertaining. Featuring a handful of standout performances courtesy of Plaza, Coolidge, and Fahy, the season delivers a messy, sexy adventure that, even more so than The White Lotus season 1, often unfolds in ways that are both surprising and intriguing.

Whether or not The White Lotus season 2 actually manages to stick its landing remains to be seen. That said, based on the overall trajectory it takes over the course of its first five episodes, it seems safe to say that White has already set the stage for The White Lotus’ latest adventure to conclude in an even more explosive and emotionally complex way than the show’s popular first season does. As fans of The White Lotus will know, that in and of itself is an accomplishment that shouldn’t go uncelebrated.