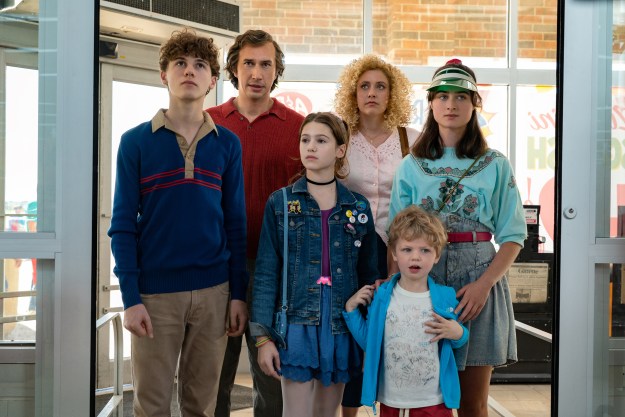 “White Noise is a bold but ultimately lackluster attempt on the part of writer-director Noah Baumbach to bring Don DeLillo's beloved 1985 novel to life.”

White Noise, the new Netflix film from writer-director Noah Baumbach, is an aggressively odd, fractured dramedy. At times, the film feels so purposefully artificial and satirical that it more closely resembles the movies made by iconic film absurdists like Robert Downey Sr. than it does any other mainstream Hollywood offerings. At other times, the film is so colorfully made and visually bombastic that it feels more akin to something like E.T. the Extra-Terrestrial than it does, say, Putney Swope.

The film is, in other words, ambitious, and as far as adaptations go, White Noise is as bold and unapologetically strange as it gets. There’s something admirable about White Noise’s overbearing strangeness, in fact, and the way in which it utterly refuses to ever even pretend that it exists in a world that resembles or feels like our own. The boldness of Baumbach’s execution does not, however, mean that White Noise actually works. Ultimately, the film feels more like an admirably creative exercise in the art of adaptation itself than it does a cohesive or compelling piece of filmmaking.

Based on Don DeLillo’s 1985 novel of the same name, White Noise follows Jack Gladney (Adam Driver), a college professor who has received great renown for his Hitler Studies program, as well as his wife, Babette (Greta Gerwig), and their four children. The film’s first 25 minutes or so are, for the most part, purely set up. Throughout its opening act, Baumbach’s latest film introduces viewers to not only the Gladneys, but also the off-kilter version of 1980s America that the film takes place in — one where nearly everyone talks with a stilted cadence and the kind of obnoxious, overly formal manner of speaking that can usually only be heard in the most oblivious and self-involved of college social circles.

Baumbach, to his credit, leans fully into his characters’ unnatural behaviors and speech patterns. In doing so, he’s able to consistently heighten White Noise’s satirical edge over the course of its 136-minute runtime, but he also ensures that the Gladneys never feel like real people, either. Instead, the characters function purely as vessels for Baumbach and DeLillo’s ideas, which inherently creates an emotional separation that leaves White Noise feeling strangely flat. Coming off 2019’s Marriage Story, which stands as Baumbach’s most open-hearted and emotionally resonant film to date, it’s undeniably shocking to see him return to filmmaking with such a purposefully cold effort.

That said, while White Noise firmly ranks as one of the most emotionally lifeless films of Baumbach’s career, its story does allow him to flex his muscles as a director in ways he’s never truly been allowed to before. There are even moments of such genuine, Spielbergian wonder littered throughout White Noise that it’s hard not to leave the film wishing that Baumbach and cinematographer Lol Crawley had come together to work on a more straightforward sci-fi adventure instead of the piece of satirical American commentary that they actually made.

Baumbach’s visual prowess is most apparent throughout White Noise’s second act, which revolves entirely around an event from DeLillo’s novel that’s known as “The Airborne Toxic Event.” After a nearby truck filled with flammable materials collides with a train car carrying deadly chemicals, the Gladneys and their neighbors are forced to go on the run from the spiraling black cloud that begins to hover over them and their town. Behind the camera, Baumbach shoots White Noise’s midpoint evacuation scenes with a kind of energy and slick style that he’s never employed in any of his prior films.

Baumbach fills White Noise‘s Airborne Toxic Event sequence with a level of underlying dread and tension that isn’t present throughout the rest of the film. That’s particularly true of one dangerous late-night stop at a gas station, which Baumbach shoots so skillfully that it’ll leave you asking why he’s never tried making a full-fledged sci-fi film before. It’s also in these moments that Danny Elfman’s customarily majestic score is allowed to take center stage and shine brightest.

Unfortunately, White Noise only spends a certain amount of time on the Airborne Toxic Event before it lets Jack and Babette return to their normal lives for the film’s final act. White Noise, in turn, returns to the same level of emotional separation throughout its final third that had previously dominated its opening act. The film makes space in this section for both Babette and Jack to opine endlessly about their shared fear of death, but White Noise never removes enough of its own layers of artifice in these scenes. Babette and Jack’s fears and anxieties, consequently, never feel like real or authentic emotions. Instead, they come across more like bullet points on the list of ideas that White Noise is so unwaveringly committed to exploring.

The film’s withdrawn, satirical approach leaves many of its capable stars utterly stranded. Only Driver, through his own sheer force of will, is able to imbue his character with anything resembling actual humanity. White Noise is too self-conscious to allow any of its other actors to accomplish something similar. In the end, the film ultimately seems all too content to spend its time swimming in the shallow end of its own artificial world, and that’s a problem no amount of technical showmanship can fix.