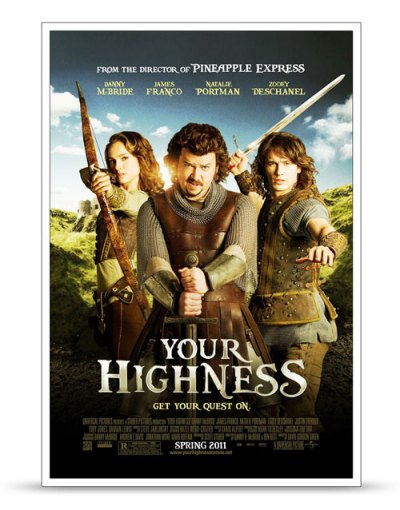 Your Highness is not exactly what you would call a smart comedy. It never veers too deeply into the realm of slapstick, nor does it rely too heavily on gimmicks (unless you count male genital jokes-of which there are many), but there is a very dumb undercurrent to it. That doesn’t mean it doesn’t have its funny moments—it definitely has some laugh out loud parts— it just won’t win over audiences that want depth. It will, however, be a good choice for people looking for a film where they can turn their brain off and have a few laughs.

As mentioned before, Your Highness is funny and enjoyable for the most part, but it’s not going to have the staying power that other, recent comedies have had. The Hangover was R-rated and raunchy at times, but it had an intelligence to it that Your Highness lacks. Instead, this film tries to amuse you by becoming a parody of fantasy films, and it succeeds for the first half of the film. It is funny to see the heroes face off against a mythical foe and instead of dashing in with swords drawn, they scream, drop an F bomb and run for their lives. That is funny because you don’t expect it. But when you see the same thing for the fourth time, you kind of realize that the joke has worn thin, and there isn’t enough meat to the story to sustain most people’s interest.

That doesn’t make Your Highness a bad film. It has its moments. They are just few and far between, and as the climax of the film finally is within sight, the plot tries to take back over and fails in the process.

Once Upon a F*@#ing Time

Described as a fantasy comedy, Your Highness stars Danny McBride (Eastbound and Down, Pineapple Express) as Thadeous, the slightly useless younger son of King Tallious (Charles Dance). Thadeous is an arrogant fool who lives in the shadow of his older brother, the heir to the throne. That heir would happen to be Fabious played by James Franco, who yes, is actually younger than McBride. If that fact bugs you, then this movie is not for you. Despite Thadeous’ nature, Fabious loves him dearly, and when he returns from a quest with the lovely Belladonna (Zooey Deschanel) as his fiancé, he asks him to be his best man.

Thadeous blows the wedding off, which turns out to be a good move as the evil wizard Leezar (Justin Theroux) appears and absconds with Belladonna in order to fulfill a prophecy involving him knocking her up. Thadeous is forced to join Fabious on his quest to save his fiancée and kill Leezar, but to do so they must first recover a magical sword. Things go badly right from the start, and the brothers, along with Thadeous’ servant, Courtney (Rasmus Hardiker), are on the run from multiple enemies. They soon meet Isabel (Natalie Portman), a warrior on a quest to avenge her murdered brother.

And that is about all the setup you should need for Your Highness. The story is straightforward enough, and while it gives an original fantasy setting to the raunchy humor, it’s just something that happens between the jokes. If you are hoping for something that will push the imagination and stir the soul, you should double check the theater, because you may have wondered into the wrong movie.

The overall story for Your Highness is weak, but thankfully there are still some genuinely funny moments. That does have the consequence of making the film almost a collection of skits rather than a comprehensive narrative. That might sound like what you would expect, but it causes two problems. First, the secondary point of the plot is the growth of Thadeous into a man. Danny McBride is always fairly funny, but the character of Thadeous can come off as annoying given the circumstances. The one-liners for example are often hilarious, but the situations are annoying and predictable. If you are hoping for McBride’s Eastbound and Down character Kenny Powers in Camelot, you’ll be disappointed.

The second problem with having a weak plot is that it involves Natalie Portman as a slave to that plot. She plays the “straight man” to Thadeous, and her character is stifled. It is a waste of incredible talent to have a recent Oscar-winner in a comedy role where she isn’t even given the chance to make more than a joke or two.

Director David Gordon Green (Pineapple Express, Snow Angels) seems to have abandoned the notion of a coherent story in favor of a heavier slant on individual jokes. In Pineapple Express, the jokes work with the story, which in turn made the movie a success because you actually liked the characters. In Your Highness, there isn’t much to like about the characters. That isn’t to say that they are completely unlikable—they are somewhat thanks to the casting—but the characters are just very, very thin.

Although Natalie Portman isn’t given much to do with the character of Isabel, she still has a certain amount of gravitas that makes her interesting to watch. McBride also has moments where the character grates on you, but he also has the bulk of the humor in the film, so he ends up with more good than bad. The big loser though is James Franco, who seems to be in a different movie from the rest. Portman is forced into a serious role, but she handles it as a counter-balance to Thadeous’ foolishness, so the two balance out. Franco, on the other hand, is wasted in the role and seems to be unsure whether he should play the role seriously or just play it for laughs like McBride does. This seems more of a failing of the script than the actor, but he just feels out of place in this film. He either needed more to do or less.

Some of the funniest moments come from the supporting characters, like the servant Courtney and the wizard Leezar, both of whom have several laugh-out-loud lines. Daschanel does well with what she is given, but she is not in the film much, and is tied and gagged for half her screen time.

The casting is solid in general though, and it gives the audience an anchor to characters that would otherwise be forgotten the moment they were off screen.

Your Highness is a raunchy and risqué film that has some extremely funny moments, but that is all they are—moments. The story itself falls flat, and is never entirely engrossing. These don’t sink the film though, but it makes it less than what it could have been.

If you are not a fan of McBride, and if you are a Franco-hater, then this film isn’t for you. The film is driven by the characters that amble their way through the plot and never feel really connected to it. Even when the inevitable moment comes and Thadeous finally comes into his own, it’s handled quickly with a voice over so it can then jump back to the next scene, which jumps to the next scene and its new joke offerings, and the next scene and on.

The weak story makes it hard to connect with this film in the same way that it’s hard to connect to a standup comedy special on TV. It can entertain and amuse, but there isn’t much depth to it. The jokes are also very raunchy, and about half of them are hilarious while the other fall flat. There are enough to justify seeing the movie though, but the movie just doesn’t have enough to really make it much more than an entertaining, albeit forgettable time.