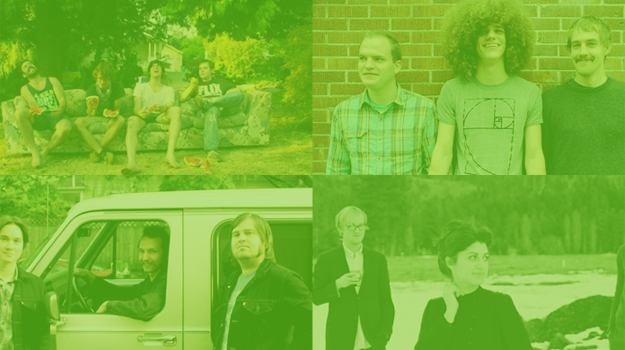 When musician Amanda Palmer raised more than $1 million on Kickstarter to record a new album back in June, she seemed to be blazing an independent new trail for performers everywhere. No longer were musicians beholden to record labels to foot the considerable expense of recording an album or tour. Fans could each chip in just a bit to neatly bypass the corporate machine. Freedom through crowdsourcing. A true meritocracy!

Then Palmer, still sitting upon a heap of money from gracious fans, asked the musicians who opened for her on tour to play for free. Pundits and fans alike scoffed, and the promise of this new platform seemed to come into question before it even delivered.

Is Kickstarter a brilliant engine for funding creativity, or a shortcut for lazy artists? I asked four of Portland’s best indie bands to get their take on the evolving platform.

Considering there is one Kickstarter project for every thousand Portland residents, it should come as no surprise that three of the four bands I talked to had already used Kickstarter, or a similar fundraising method. Radiation City and Fanno Creek have each held Kickstarters to help fund tours. The We Shared Milk held a fundraising effort on their own website rather than using Kickstarter. Sons of Huns were the only band that has never dabbled in crowdsourcing.

While the bands I talked to still felt optimistic about Kickstarter, each raised legitimate concerns about some of the ways they’ve seen it used by other musicians.

Boone Howard of The We Shared Milk says too many bands use Kickstarter in self-indulgent ways. He sees “not dedicated, haven’t-put-in-the-time bands” using Kickstarter to fund tours, which he equated to “harassing friends and family to fund their vacation.”

“I’ve had friends fund tours on Kickstarter, then put forth the effort and prizes to make sure the contributors got their money’s worth,” says Howard. “That is fine. As long as that contract with the contributor is fair, then use the money for whatever you want. Fund a pizza party.”

Howard’s friends in Fanno Creek held a Kickstarter in conjunction with tour-mates Animal Eyes to fund more than two weeks of shows up and down the west coast this fall. Vocalist and guitarist Evan Hailstone shared some of Howard’s misgivings. “I had great reservations about using Kickstarter to fund anything band related, because it could be seen as a shortcut,” he said. “Why should a band need to ask for money to do the things a band has always done?”

Hailstone also criticized bands with high fundraising targets. “One band raised $50,000 in order to record an album. That really got under my skin. No band needs that amount of money to do anything.” The same band also offered to advertise for anyone pledging $10,000 to the project. “This to me is basically saying, ‘Please help us achieve our goal of selling out,'” Hailstone joked.

Sons of Huns drummer Ryan Northrop echoed Howard’s comments on Kickstarter. “My main grievance is getting bugged by bands asking to help fund touring or money for gear. That’s obnoxious,” Northrop said. “I feel there is a certain obligation as a musician to finance things on your own. Touring and gear aren’t good reasons to ask people for money. Bands need to put themselves out there [and risk losing money] or coordinate payment through the clubs they’ll play, and sell merchandise to keep the tour going.”

Cameron Spies of Radiation City specifically cited the Amanda Palmer debacle as an example of how Kickstarter can lead musicians astray.

The upside of crowdsourcing

For all its notable failures, Kickstarter has also produced some encouraging successes. The 20piece band MarchFourth raised nearly $50,000 for a much-needed tour bus, and the indie roots music festival Pickathon now has its own book after scraping together $8,000 from backers.

“I believe it’s a great tool to introduce anything creative or further a cause,” Northrup said, specifically “to fund and give exposure to projects that otherwise would be difficult to do.”

Hailstone appreciated how the platform gave everyone equal footing. “[Kickstarter] is a tool available to everybody, and it’s transparent in that people know where their money is going, so it is OK. Other bands have the same opportunity, and no one has to donate if they don’t want to,” he said.

Despite their concerns, most of the musicians I talked to still favored Kickstarter as a tool for bands, even if it’s susceptible to the occasional misuse or exploitation.

“While it might be a turnoff to see projects raise $10,000 toward a goal you don’t care about, it is also very inspiring to see other groups succeed in funding projects which will actually make a positive impact,” Hailstone concluded.

Still, none of the bands – including the ones who have already used Kickstarter – envisioned using it in the immediate future. Northrop said Sons of Huns would turn to Kickstarter “only if we exhausted all other resources.” Hailstone expressed a similar reluctance. Howard said that The We Shared Milk might hold fundraisers in the future, but are unlikely to use Kickstarter due to their desire to “cut out the middleman.”

Though Radiation City turned to Kickstarter to purchase the van used on their first national tour, the band is producing its upcoming full-length release through a mix of elbow-grease, personal savings, label funding (the band is signed to Portland’s Tender Loving Empire), and private patronage. Funding their album this way wasn’t easy, but it does offer one major advantage over Kickstarter: The band can focus more of their attention on their art, absent the distractions of fundraiser promotion and fulfillment.

Most bands seems like they would be happiest to take this route, but it isn’t always possible. When that’s the case, Kickstarter can make a great tool for ambitious, talented bands – but only if they use it ethically. Those that don’t are compromising Kickstarter’s credibility, and, by doing so, reducing the pool of dollars available to artists using it.

It’s a shame that they do. Kickstarter helps the public support artists in a way never before possible. And, if these bands are any indication, there are many artists worth supporting.

These criticisms suggest a few guidelines for bands using Kickstarter. Set a modest funding goal. Take the time to provide worthwhile rewards. If you succeed beyond your wildest dreams like Palmer, share some of your wealth with other worthwhile artists. Above all, make sure you put in the work beyond the creation of the Kickstarter. If you have only played half a dozen shows in your hometown, it’s probably not reasonable to ask your friends and family to support a full-blown tour.

Topics
Amazon’s free Spotify competitor is here. Just ask Alexa
Hi-res streaming audio service Qobuz arrives in U.S., threatens Tidal’s monopoly
Apple Music is winning the stateside streaming war. Here’s how it beat Spotify
New leader alert — Apple Music is now beating Spotify in U.S. paid subscribers
Spotify is finally making it easier to block unwanted followers
LG’s WebOS TVs get a native Apple Music app
What is hi-res audio, and how can you experience it right now?
Spotify adds a Netflix hub so you can listen to the chilling sounds of Squid Game
How to play Apple Music on an Alexa device
How to add family members to your Apple Music subscription
How to stream music to a HomePod with an Android phone
Watch Spotify’s tour of its plush U.S. headquarters
Chill with Spotify for free on Delta Airlines this holiday season