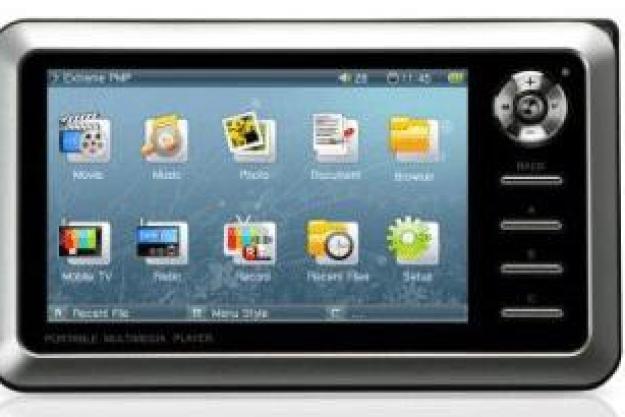 “The A3's main rivals are the Archos 605 WiFi and the Creative Zen Vision:W, and the A3 trumps them both in most respects.”

The Cowon A3 has a lot going for it: broad file format support, gorgeous 4-inch widescreen LCD, and high-resolution AV recording features, all of which have been improved since its predecessor, the A2. We can overlook the A3’s lack of DRM support or wireless features, but we’d hoped for a better navigation controller than the same joystick from the A2. This PMP has a few other minor problems like short battery life for audio playback and a slightly confusing interface, but it’s still a satisfying gadget on long trips or commutes.

Four chrome buttons adorn the area to the right of the screen, with the tiny joystick just above them. On the top edge of the player there are a pair of small speakers and a monaural microphone, while the reset hole and hold/output switch are on the bottom. Power is on the right edge, and ports for earphones, power, USB 2.0/Host, AV in and out, and S-Video/composite out are covered by a plastic flap on the left.

The overall design is clean and sleek, and the gadget’s heft (9.5 ounces) gives it a solid, durable feel. It fits easily in a jacket or loose pants pocket, though its weight can make it a bit cumbersome.

Wireless features like Bluetooth and WiFi are all the rage in portable media players, but Cowon left both out in the A3, concentrating instead on making it an AV playback and recording powerhouse. Aside from video, photo, and music playback, the A3 has an FM tuner, a video recorder, an audio recorder, and a text viewer. Compared with Archos’s 605 WiFi, the A3 represents a tidier solution, since everything you need to record audio (via the integrated mic or line-in) and video is built-in instead of requiring optional components.

Support for lots of file formats, from the popular to the obscure, has always been one of Cowon’s strong suits. The A3 handles all the usual suspects like MP3, WMA, OGG, and AAC/AAC+, as well as multiple lossless formats like Apple Lossless, FLAC, and APE. It even reads several extremely obscure formats like BSAC, True Audio, WavPack, G.726, CM. Video formats abound too, including most common formats found on file-sharing sites or via BitTorrent, like AVI (DivX, XviD, MPEG-4), MP4 (H.264 and MPEG-4), WMV, ASF, and MPG (MPEG-1 and 2), plus MKV, OGM, and VOB files (common for DVD rips).

Conspicuously left out is support for Windows Media DRM 10, the basis for many online music and movie services including CinemaNow, Vongo, and Napster. But given the proliferation of DRM-less music stores like Amazon.com and the A3’s ability to record video, content isn’t in short supply.

Cowon accommodated shutterbugs by including faster USB Host connectivity for transferring files directly from cameras (or many other gadgets) to the A3. And in addition to JPEG, GIF, PNG, TIF, and BMP, the A3 now supports the RAW image format, which should please serious photo enthusiasts and pros. (Of course, that would have been another reason to include a larger hard drive.)

Sadly, the A3’s tiny pushable joystick leaves a lot to be desired. Half the times we tried to push the stick straight in to make a selection or pause a movie, we wound up moving it to one side, selecting the wrong item or jumping ahead in the movie. We were hoping Cowon had addressed this design flaw from the A2, but maybe next time. The three contextual buttons marked A, B, and C change behaviors depending on what mode the player is in; we found these helpful for jumping directly to settings without having to dive back in via the main menu.

The icon-driven main screens are easy enough for any user to figure out, but the dual-paned file browsing, which relies on file and folder names instead of metatags, could use an update. And while we can see it being useful to have a movie playing or paused and browse menus and files superimposed on top, it does make for a slightly confusing experience.

We had no trouble filling our A3 up with content from our MacBook Pro via drag and drop in OS X or via Windows Media Player 11 in Win XP. Best of all, nothing needed conversion, which we consider one of the A3’s greatest features.

Our test MP4, WMV, and AVI files played smoothly and with vivid colors. The audio was well synced, and we didn’t hear any system noise during video playback. The one glitch we ran into was with VOB files we ripped from our own DVDs; playback hiccupped every couple of seconds, making them unwatchable, though the files played back fine on all the machines we tried. We tested rips created on a Mac with Mac the Ripper and on a PC with DVDecrypter, but results were the same; we notified Cowon and the company is investigating the problem.

Recordings we made from our cable box looked very good on the built-in screen, though even with recording quality set to maximum (in ASF format at a hefty 3Mbps and 720 x 480 resolution), we could see some compression artifacts (blockiness and shimmering) in dark and contrasty areas when we viewed them on our Samsung 40-inch 1080p HDTV. But this didn’t detract too much from the big-screen experience. We did find it a little kludgy that you have to not only set the switch on the bottom to LCD Out, but you need to dive into the settings to select the correct type of output (component, composite, S-Video) as well. Other than that, recording from any analog source is a simple affair.

All of our test audio files (mostly in 320Kbps MP3 and Apple Lossless formats, with a few OGGs and AACs in there for good measure) sounded excellent without any of the A3’s bevy of sound-enhancement features turned on. We explored the jetEffect settings which include BBE (a “sonic maximizer”), 3D Sound (virtual 3D sound), MachBass, MP3 Enhance (an audio “sharpener”), and our favorite combo for acoustic music was a light touch of MachBass with some MP3 Enhance, which really livened up the sound especially when we listened in noisy environments. Add to that a 10-band equalizer, and you’ve got one of the most flexible portable sound systems around.

We’re impressed that the A3’s line-in audio recording lets you choose a lossless format (FLAC), as well as the less-exciting WMA (up to 192Kbps), though you can’t record directly to MP3. Features like automatic gain control and the ability to set recording levels add an extra level of sophistication, making the A3 handy if you need to make high-quality recordings on the go.

The FM radio tuner uses your headphones’ cord as an antenna, though we found that turning the device itself with the power button end up worked best for tuning in fringe stations. Stronger stations came in loud and clear, and FM recording (WMA, max 192Kbps) works very well. Voice recording (also WMA up to 192Kbps) via the built-in mic also works well, though we could hear hard drive whine in our test recordings.

The A3’s rechargeable battery is not removable and takes about 5 hours to charge via the AC adapter. 7 hours of continuous video playback per charge is better than most other PMPs out there, but it’s not quite up to the A2’s standard of 9-10 hours. Most disappointing is the dismal 9-hour playback time for audio. Of course, your mileage will vary greatly depending on screen brightness and sleep settings, as well as what audio format you’re listening to (higher quality generally means more processing power, which drains batteries quicker).

The A3’s main rivals are the Archos 605 WiFi and the Creative Zen Vision:W, and the A3 trumps them both in most respects. Archos comes out ahead in DRM support, wireless capabilities, and storage capacity, and Creative’s interface is way better. But the A3’s built-in AV recording features and file-format flexibility remain huge plusses in our book, so if those are your priorities — as opposed to the Archos 605’s touchscreen or wireless features — the A3 delivers. Still, we hope Cowon will address the navigation controls in a future version.