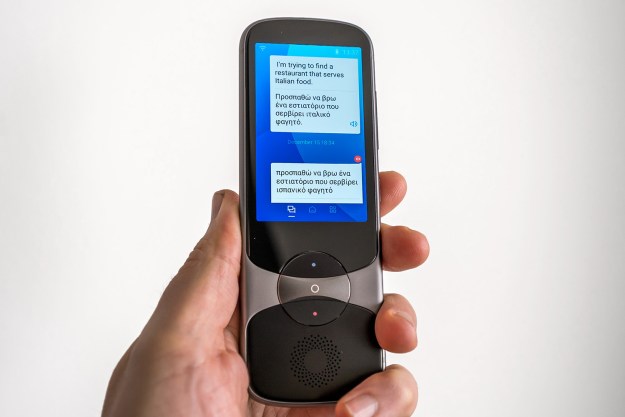 “The Jarvisen Translator isn't inexpensive, but it easily beats the speed and quality of app-based translators.”

Traveling without knowing a lick of the local tongue can be daunting for anyone, especially when left with little other recourse communicating in a foreign land. Popular apps, like Google Translate and, by extension, its Interpreter mode, are options, but not always available. Nor are they as fast as the Jarvisen Translate, a handheld device that can translate up to 60 languages in real-time in as little as 0.5 seconds.

Its singular focus could seem a few years too late, but there’s reason to use this instead of your phone.

It’s not a flip phone, honest!

At first glance, the Jarvisen Translator looks like a cell phone from a bygone era. Black, slim, with a small screen and few buttons, it’s not exactly a head-turner. It’s also not immediately obvious what it does if someone were to peek at it after you pulled it out of your pocket. This neutrality fits with the device’s mantra of being an accessible interpreter.

There’s not a lot to it once you unbox it and get started. The device comes with a leather pouch for added protection, plus a fabric-lined USB-C cable to charge it. That’s it.

The software is nicely laid out and user-friendly on the 3-inch touchscreen. Keeping things basic, the home screen displays the date and time, along with the two languages for translation. The top one, noted with a blue dot, is the one the device listens for, while the bottom one, with the red dot, is the language it will translate to. Those are also represented by corresponding physical buttons under the display, plus a home button in the middle.

A “Say Hi” button is a canned greeting introducing the device to the listener and asking for general help. Swipe right and the translation history is laid out, text message-style. Swipe left, and you have a shortcut to the settings.

There is a SIM card slot on the left side, with power and volume buttons on the right. Despite that slot, the device supports eSIM, so it came with connectivity out of the box.

Speakers are arrayed both the front and back. Though this is decidedly not a smartphone, it does have 16GB of internal storage and 2GB of RAM onboard. The battery is rated to last for eight hours.

The Translator has decent connectivity options, including Wi-Fi and Bluetooth, but it’s the 4G LTE part that stands out more. The company says the device has global coverage in 98 countries and regions worldwide, with two years of that included at the $500 pricing option. For $429, the device comes with no built-in data.

Users can top up after the initial two-year coverage expires by signing up for a new plan on the website. Those who went without built-in data can add the global coverage plan at any time.

Having a wireless connection ready to go takes away the need to carry a phone as a wireless tether, or as a translation tool unto itself. But how does accuracy differ from what phones and apps can already do?

Jarvisen claims speech recognition is 95% accurate. The first piece of that linguistic puzzle is the 4-Mic far-field microphone array that runs with “smart noise reduction” and an octa-core Snapdragon processor. That combination is what ultimately delivers the 0.5-second response time.

Its speed is as advertised. Without question, the device synthesizes speech faster than any app I’ve tried to date. It doesn’t wait until someone finishes speaking, but translates on the fly as it picks up the speaker’s voice.

Its translation quality is better than you might expect, with a bit of local flair thrown in, particularly when translating Spanish and Portuguese. It even has professional vocabulary coverage, so can recognize lingo in the medical, finance, legal, and engineering fields.

But language is full of nuance, and that’s where things can get tricky. Dialects can differ dramatically. Arabic comes to mind, where the dialect spoken in Morocco will sound completely different from that spoken in Iraq.

English and French aren’t that different in that regard, either. A Scottish dialect is going to come off differently from a Jamaican one, just like Haitian and Quebecois French are not the same as what people in France usually speak.

So, while translation is technically correct word-for-word, the nuance and spirit of the words are sometimes lost in translation. For example, there are some common refrains in Greek that would make little sense when translated to someone using the device. That’s the difficulty facing translation tools. Words aren’t that difficult to translate, but accurately depicting their meaning can get tricky.

There’s just a few offline translations you can download and install by going to Settings>Offline Translation. As of this review, English<>Chinese, Japanese<>Chinese, Korean<>Chinese, and Russian<>Chinese were the only options. Still, that’s not nothing.

Google has improved offline access and accuracy for its Translate app, but the company has acknowledged it may not be as accurate as it is when online. All other offline translation I’ve tried pales in comparison to this device.

Since it’s not a phone or wireless headphones, the Translator is consistent with how long it lasts per charge. On standby, it’s rated to last six days on 4G LTE, 10 days on Wi-Fi, and 17 days without any network connection. It’s harder to measure how long it lasts when you’re using it, but I’d say 8 to 10 hours is typical. This isn’t a device you’ll have to charge every day.

It charges via USB-C, so a typical smartphone cable offers a way to top up when necessary.

At $429 without data and $500 with two years included, this is an expensive device to buy for a vacation. Repeat travel to foreign lands is where it may pay off. Also, if you run a business where dealing with non-English speakers is common, this could be a quicker way to work with them. The speed and accuracy are impressive, so it comes down to how quickly Jarvisen updates it and improves upon what’s already there.

The most obvious alternative is Google Translate and the Interpreter mode that recently carried over from its Home devices to Android and iOS. It’s pretty good, and works both ways, translating the two languages over the course of the conversation. There are no real buttons to press, and it supports 44 languages. It works on devices people already own and carry with them, though you will need a data connection to use it outside of a Wi-Fi network.

That’s not to say the Jarvisen Translator doesn’t have direct competitors trying to do the same thing. Pocketalk translates up to 74 languages and comes at a lower price, but isn’t as fast or accurate. iIi specializes in offline translation, but it’s limited to only a few languages and doesn’t truly allow for two-way translations.

The device isn’t water-resistant, so keeping it free of rain or an accidental toilet dip is a must to keep it safe. However, it’s not so much the hardware, but rather the software that will really determine how far it goes. Language translation, especially when there’s some element of machine learning involved, needs constant refinement.

So far, it looks like Jarvisen is serious about improving on what it has here, and that’s good news. The company doesn’t have the resources Google and other tech behemoths do, but at least there’s a focus on getting it right when people are speaking different languages to one another.

Yes, though this isn’t a device for a short vacation. This is for serious travelers who spend weeks or months away from home.

2024 Chevrolet Equinox EV aims for affordability with $30,000 base price
This startup claims to have unlocked the secret to speedy CPUs
Chrome just added a great new way to protect your passwords
HP unveils new IPS Black monitor with one key new feature
There’s a problem with those amazing Ryzen 7000 benchmarks
Halo Infinite Season 3 delayed until 2023, split-screen co-op canceled
Apple’s antivirus strategy for Mac has gone fully preemptive, but is that enough?
Intel admits to one key regret about its launch of Arc GPUs
Here’s why you need to update your Google Chrome right now
Malware has a terrible new way to get to your computer
Jeep is launching its first two electric SUVs in the U.S. in 2024
3 upcoming gaming monitors worth getting excited about
Leak confirms Intel Raptor Lake may bring huge core increase