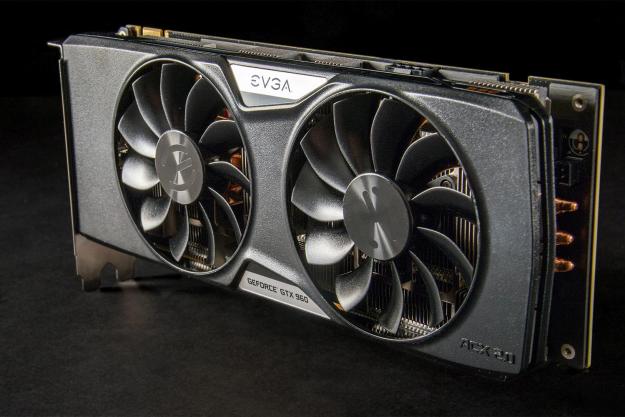 “The GTX 960 is an excellent budget video card for gamers with a 1080p display.”

The number 60 has developed a special meaning in Nvidia’s product line over the last five years. While its high-end flagships push the boundaries of performance, its mid-range GPUs, like the much-loved GTX 660, are the chips most gamers actually buy. It’s currently the most popular family of video cards in Steam’s hardware survey, and the card most frequently used by fans of the multiplayer-online-battle-arena (MOBA) genre.

Yet it’s been awhile since we’ve seen an update. GTX 760 reviews hit the web in June of 2013, over a year and a half ago, with the card shipping in volume over the following month. Gamers have waited, and waited, and waited for a successor. Now, with the GTX 960, it’s finally here.

What Nvidia hopes to accomplish with this card is clear: The GTX 960 is built to be everything an average gamer will need. It may not run every game at the absolute highest settings, but it should handle most games at 1080p and a step off maximum detail – in theory, at least.

The formula of affordable performance has been Nvidia’s key to success in the past, but it’s never been easy to implement. Balancing speed, price and efficiency is tricky, and even a minor flub can send a card like this into the abyss of missed expectations.

The GTX 960 uses the same Maxwell architecture as the GTX 980 and 970 but, as you might expect, it’s been altered to craft a GPU that better suites the 960’s mission.

Nvidia calls the chip “GM206.” It has eight streaming multiprocessors, each of which contains 128 CUDA cores, for a total of 1,024. That’s roughly half the GTX 980, which provides a good idea of where this new card stands compared to the flagship. The GTX 960 is not just a minor step-down from the cream of the crop, but instead a dramatic revision that cuts back in several key areas.

Still, Nvidia says it has extracted maximum grunt from the cores available. Per-core performance is up almost 40 percent compared to Kepler, the architecture used in the 700 series chips, and performance per watt has doubled.

Few gamers will have reason to quarrel with the GPU. They may have a complaint about the memory, however, which is a meager 128-bit pipe paired with 2GB of GDDR5.

That works out to 148.8 gigabytes of bandwidth per second, which is about 100 gigabytes per second behind the GTX 980, and only a minor improvement over the GTX 660 (which Nvidia quotes at 144.2GB/s). Such a tiny bump is surprising; the GTX 660 was released almost three years ago and the memory demands of games have increased since then.

Nvidia has tossed in hardware encode and decode support for H.265 alongside HDCP 2.2 compatibility over HDMI 2.0. This is an important advancement for anyone interested in home theater, as it means a PC with the GTX 960 will be ready to handle current and upcoming 4K content and output it to an HDTV.

And then there’s the green team’s usual suite of software utilities, which includes GeForce Experience for driver updates, ShadowPlay for gaming recording and G-Sync for a stutter-free experience on compatible monitors. There’s also Dynamic Super Resolution, a new feature introduced with the 900 series that can improve the quality of older titles by rendering at a very high resolution and then down-scaling the result with a special filter. DirectX 12 support is included, too.

A typical GTX 960 occupies two slots, like almost every modern PCI Express video card, and measures about nine and a half inches long. The EVGA card we reviewed, which has a custom cooler, is 10 inches. The size of the reference card is identical to the GTX 760, which itself was identical to the GTX 660.

Memory bandwidth is barely more than a stock GTX 660, which is several years old.

Only a single PCI Express power connector is needed to power the GTX 960, as with previous cards in the family, and Nvidia’s specifications call for a surprisingly small 400-watt power supply. The out-going GTX 760 called for a 500-watt supply and the GTX 660 called for a 450-watt unit.

Nvidia boasted during its presentation that the GTX 960 can run League of Legends at 1080p while consuming only 30 watts, and under that workload the card can be passively cooled. That’s pretty good, but it’s apparently not enough for OEMs, which are as usual putting together their own designs.

EVGA’s custom cooling solution, which the company calls ACX 2.0, helps the card maintain silent, fanless operation whenever the GPU’s temperature is below 60 degrees Celsius through the use of a large cooling plate that covers the memory. The company also uses a double ball-bearing fan design to prolong life and improve efficiency when the fans are active. The card is not overclocked from the factory, but owners can use EVGA’s PrecisionX software to turn it up to 11.

The performance of silence

We put the cooler to the test and found it delivers a quiet experience. At idle the fans remain off, which of course means the GTX 960 adds no noise to the system. Full load forced the fans on, of course, but even then we measured no more than 38.9 decibels of noise. That’s slightly less than the GTX 980, which was already among the quietest cards we’ve ever reviewed.

To see how the claims of passively cooled gaming stacked up, we turned to Unigine’s Valley benchmark, which we ran at a variety of settings between 720p and 1080p resolution. We also limited the frame rate to 60 FPS. The card was unable to run a full test loop without turning on its fans. While some aging 3D games may play passively, that’s not how the card works with most titles.

We measured power draw of 52 watts at idle, which rose to as much as 228 watts at load. Both figures are not as far off the GTX 980 as you might expect. When we tested that card in the same rig (a Falcon Northwest Talon) we measured idle draw of 58 watts and load draw of up to 250 watts. On the other hand, though, the 960 needs 20 watts less at idle than AMD’s much slower Radeon R7 250X.

Now we know where Nvidia intends the GTX 960 to compete, but talk isn’t worth much. Here’s how this new mid-range hardware stacked up in modern titles.

Futuremark’s 3DMark is the industry standard among synthetic benchmark tests. It provides a solid, well-rounded look at performance across a variety of loops designed to simulate different workloads, from games so basic they can run on tablets to the most demanding 3D titles. We focus on Cloud Gate and Fire Strike, which simulate modest and extremely intense titles, respectively.

The performance picture here is clear. Nvidia’s GTX 970 trails the flagship 980 by about 20 percent, and the 960 is about 40 percent slower.

That’s a big disadvantage, but it’s not unexpected given the price difference between these cards. A GTX 980 will typically set you back $550, but the 960’s MSRP is just $200. Based on 3DMark alone we’d have to say the GTX 960 is a solid value.

Now what about real-world gaming?

We started in Diablo 3, a graphically simple game most modern hardware can handle with ease. The GTX 960 is no exception, blazing an impressive path at 1080p. It hit an average of 176 frames per second even at very high detail.

Players with a 1080p monitor will have no complaint, but 4K gaming is rarely smooth.

Such excellent performance is bound to tempt gamers into buying a 4K monitor, and that wouldn’t be a mistake – if this is the only game you enjoy. We measured an average frame rate of exactly 60 FPS with all details at maximum, and the minimum dipped no lower than 49 FPS.

The latest title from strategy developer Firaxis isn’t exactly a looker, but it can be surprisingly demanding. We ran the baked-in benchmark, which simulates a busy end-game situation, and found the GTX 960 managed 70 frames per second at maximum detail and 1080p resolution. The minimum, once again, is a modest 49 FPS.

4K hammered the 960, however, as it hit an average of just 44 FPS even at medium detail with 2x MSAA turned on. Switching to maximum detail slowed the game to a crawl, and we saw an average of just 28 FPS. That’s playable because of the game’s slow pace, but it’s certainly not ideal.

DICE’s standout first-person shooter is no longer at the cutting edge of graphics, but it can still be tough for mid-range hardware to run with every bit of eye candy turned on. The GTX 960 once again delivered a good-enough performance, though, hitting 60 FPS at 1080p and Ultra detail. The minimum framerate was 52 FPS.

That, of course, doesn’t leave much leftover grunt of 4K. We measured a playable average of 45 FPS at medium detail, which sunk to an unplayable 17 FPS average at ultra. Clearly, the GTX 960 can’t handle much beyond 1080p in this title.

This cross-platform game was the surprise treat of 2014, but it’s also extremely hard on hardware, and the GTX 960 isn’t entirely up to the task. While the title averaged 86 frames per second at medium detail, that was cut back to a mere 38 at ultra. Worse, the minimum frame rate came in at 16, which means gameplay can be frustrating at times.
4K? Forget about it. At medium the average was a barely playable 29 FPS. Ultra cut that number down to just 15 FPS, with a minimum of nine. Clearly, this game is too much for the GTX 960 when played at UltraHD resolution.

Now it’s time for the ultimate test, Crysis 3. While the game is getting on in years it remains one of the most demanding titles available, a reputation it reaffirmed during our benchmarks. Even 1080p and medium detail turned in an average of 57 FPS, and very high reduced that to a stutter-stop 16 FPS. Ouch!

As for 4K, well, you can imagine how it went down. At medium the game hit an average of 24 FPS, which is almost playable, but very high detail was hopeless. The game continually crashed whenever we switched textures to this setting.

Nvidia’s review guide was careful focus on 1080p gaming, and it’s easy to see why. At full HD the card performs well, hitting an average of 60 FPS in most games even with detail set to maximum. Only Crysis 3 proved a real challenge, reporting an average of 57 FPS at medium presets. Up the resolution to 1440p or 4K, however, and there may be problems.

Gamers with a 1080p monitor will find a lot to like. The new GTX 960 is about 20 percent quicker than the outgoing GTX 760, and it provides that boost alongside passive idle operation, minimal noise at load and a more affordable price. This is what most gamers will, and should, buy. Just don’t expect it to handle anything you throw at it.

Topics
We may know the cause of the RTX 4090’s melting connectors
Nvidia’s RTX 4080 12GB may soon return, but not how you think
Here’s how you could protect your RTX 4090 from melting
EVGA’s lost RTX 4090 prototype shows us what could have been
We’re lovin’ this official McDonald’s gaming chair — the McCrispy Ultimate
Scientists find a surprising answer to the future of computers — paper
The Framework laptop is officially Thunderbolt 4 certified
Microsoft’s DirectStorage can now boost your game loading times by 200%
Someone built a PC in a microwave, because why not?
Update Windows now — Microsoft just fixed several dangerous exploits
This gadget could turn your M1 Mac into a productivity beast
Mayweather vs. Deji live stream: How to watch the fight
The idea for AMD’s next-gen GPUs all started on a napkin