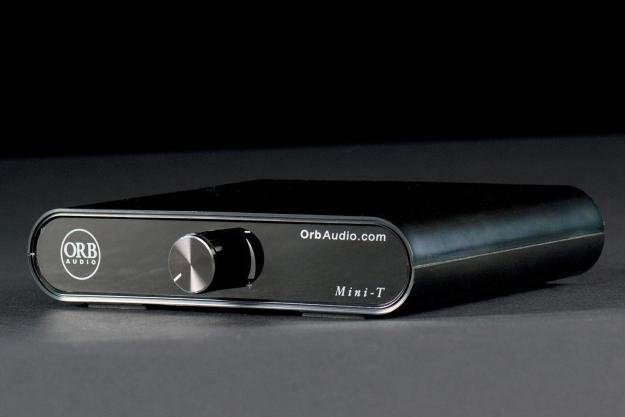 “Orb audio’s Mini-T provides clear, accurate, and powerful sound in a pint-sized package, perfect for assembling a wide variety of home stereo configurations on the cheap.”

Orb Audio prides itself on offering low-cost sound solutions with a hi-fi pedigree. The company makes a host of audio components that stay safely under the $1,000 mark. And while the company may be known best for its array of spherical speakers, perhaps nothing in Orb’s arsenal embodies its budget-audiophile philosophy better than the $70 Mini-T digital amplifier.

The “T-Class” amp was brought back from the dead by Orb in 2007 after the originator of the T-amp, Tripath, went belly up. Tailored for music lovers who want more from their desktop speaker system, Orb’s latest iteration aims to pack a powerful punch in a tiny package with 15 watts per channel, Orb’s new “Gold Pin” amplifier chip, and a subwoofer output. The Mini-T is just shade bigger than a whiskey flask, making it versatile enough to live on a desktop, yet it promises to be powerful enough to fill whole room with sound. Here’s what happened when we put the Mini-T through its paces.

We received a deluxe setup from Orb with all the components and accessories we might need to set up a functioning system. However, if you forgo adding any accessories when you place your order, the Mini-T will arrive in a decidedly barebones package. In a plain cardboard box we found the small plastic amplifier slung between two pieces of foam, a power supply and IEC cable, and a small instruction manual – that’s it. If you want a full sound system from Orb, you can get a pair of Orb’s Mod1X speakers paired with the amp for $300, but speaker wire and a subwoofer cable will cost extra.

As we pulled the amp from the box, we were shocked by how light it was. Its meager dimensions measure only 6 x 5 ½ x 1¼-inches (W x D x H – in inches), ensuring it will take up little space on any desktop or stereo cabinet. The glossy plastic shell looks smart with its sleek, rounded edges, but the device felt a little cheap and flimsy in our hands.

The Mini-T’s design is about as minimalist as an audio component can get. Its succinct front panel bears only a single black knob rimmed with silver, which powers the system on and controls the volume level. A muted blue LED glowing around the edges of the dial is the lone indication that the system is on and functioning.

The back of the amp hosts a small port section at the center, including a power port, a single 3.5mm stereo input, and the welcome addition of a line-level subwoofer output. We were slightly dejected to find dual sets of spring-loaded wire clips were kept as a part of the amp’s design. 5-way binding posts would have been a nice addition, and well worth any added expense.

The glossy plastic shell looks smart with its sleek, rounded edges, but the device felt a little cheap and flimsy …

A strange design characteristic about the amp’s speaker outputs went unnoticed until we powered the system on and realized the stereo channels were flip-flopped. When we checked our connections, we realized that, unlike virtually every two-channel amp we’ve evaluated, the left and right channels are configured at the actual left and right sides as viewed from the back. Since speakers face forward, connecting the channels correctly forces a criss-cross of the speaker cable. How odd!

Inside the Mini-T’s tiny shell is the aforementioned “Gold Pin” amplifier chip, which Orb claims provides the system its quiet signal path and low distortion. The amplifier pushes 15 watts to each of its stereo channels. Its Mighty Mouse power station is capable of driving even larger tower speakers with a modest 6 to 8-ohm load, though it probably shouldn’t be used to drive 4-ohm speakers at higher SPL (sound pressure level, AKA “volume”). Orb rates the Mini-T’s efficiency at 88 percent when pushing 10 watts at 8 ohms. and claims .04 percent distortion for 9 watts at 4 ohms. Total dynamic range is rated at 102 dB.

Apart from our initial confusion about the backward channel outputs, setting up the device was extremely simple. We connected the system to a pair of Orb’s Mod1X speakers, as well as a pair of stacked Mod2X’s using 16-AWG speaker wire provided by the manufacturer. For a more demanding test, we also connected a pair of not-so-mini AV123 Rocket Strata Mini tower speakers.

For a portion of our evaluation, we also used the amp’s sub output to feed Orb’s 8-inch subMini powered subwoofer. We connected our iPhone 5 via a 3.5mm cable for our primary sound source, but a TV or other playback device could easily be connected via an RCA to 3.5mm cable.

We started our Mini-T evaluation using the Orb Mod1X speakers. The first thing we noticed after firing up the little amp was its impressively low noise floor. Sound was clean and clear with no audible signal hum, even when we had the volume cranked up all the way.

The Mini-T leaned into the rather rigid upper register of the Mod1X speakers nicely, providing a tight and accurate response in the treble, while also warming the lower register for a smoother-than-expected midrange. The fuzz effect from Radiohead’s “All I Need” was rich and full, with a sharply-detailed attack, and the vocal was pushed out front with excellent presence.

The fuzz effect from Radiohead’s “All I Need” was rich and full, with a sharply detailed attack.

However, the amp’s all-important inclusion of a subwoofer output elevated the Orb configuration beyond the tinny, aluminum can sound so common with standard desktop setups, Once we found the sweet spot on the sub’s adjustable frequency and volume dials, the tight little sub blended perfectly with the smaller drivers, aptly filling the chasm that resides in the lower midrange of both the Mod1X and Mod2X speakers.

We next connected the Mini-T to the name-defying Strata Mini tower speakers, and that’s where the amp really showed its mettle. The tiny device kicked out an articulate burst of clear, rippling treble, supplying the Stratas’ crystalline planar tweeters with a well allocated dash of brilliance and clarity. Acoustic guitars rang with sweet resonance, kicking into the background layers in a litany of harmonic overtones around the lead melody. Attacks of strings and hi-hat clicks were beautifully rendered, and there was plenty of depth to the sound, allowing for a natural-sounding overall delivery.

Indeed, Orb’s version of the Mini-T defies expectations just as well as its predecessors. Looking at the amp, you’d never guess that it could coax such robust and articulate sound from speakers 100 times its size. Yet, it does. Wanna impress your friends? Show them the Mini-T in action; they’ll be stupefied.

Still, every amp has its weakness, and for us the Mini-T’s came in the form of a slightly underpowered midrange and lower register, somewhat disappointing considering the Stratas each boast sizeable midrange drivers. Auditioning a few rock tracks, such as Muse’s “Starlight,” vocals weren’t pushed with the warmth or potency we wanted. The same went for the electric guitar at the climax of the track, which just didn’t have the punch we were expecting from the big towers. Switching on the Stratas’ powered 8-inch subs definitely added some punch to the bass and lower mids, but we weren’t able to get the full throttle sound in the middle frequencies that we wanted.

As expected, pushing the amp to max volume didn’t blow us out of the water. But it certainly provided enough sound to saturate our mid-sized evaluation room. We even had to yell over the music to communicate with colleagues as they stopped by for a quick listen to the system.

Orb Audio’s Mini-T provides clear, accurate, and powerful sound in a pint-sized package, perfect for assembling a wide variety of home stereo configurations on the cheap. Fifteen watts per channel may not sound like much, but the amp is so efficient that it is perfectly capable of handling a variety of speaker sizes, allowing those who already have a few components on hand to add that missing factor for plug-and-play audio. While the Mini-T amp doesn’t boast a premium aesthetic, it gets the job done, and its miniature form-factor should make it a welcome addition to just about any smaller home, or office.

AMD’s defenses against Spectre V2 may be inadequate