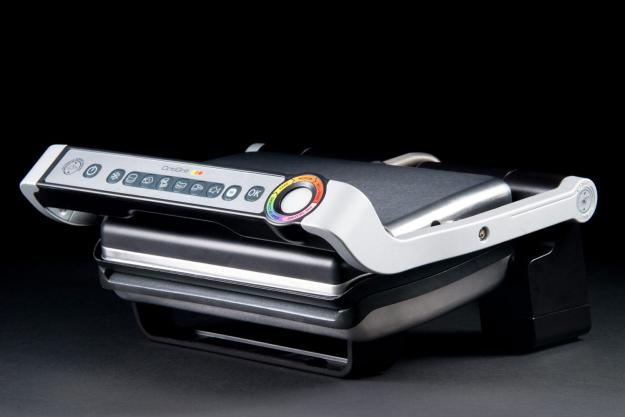 “Though it can’t handle every cut of meat, T-Fal’s OptiGrill takes much of the guesswork out of grilling.”

After covering the European debut of T-Fal’s impressive OptiGrill, we’ve been licking our chops waiting for the smart grill’s US arrival. In case you missed it, the OptiGrill is a countertop grill along the lines of those hawked by a well-known heavyweight boxing champ, but with a brain transplant from someone who hasn’t spent a lifetime taking blows to the head. T-Fal claims the OptiGrill’s digital smarts allow it to cook many kinds of meat, fish, and sandwiches perfectly, unattended. It achieves this by sensing the thickness of the food being cooked and adjusting the cooking times accordingly. Big claims, indeed. We fired it up, raided the meat counter and set to work.

There’s not much in the box besides the grill itself, a detachable drip tray, the instruction manual, and a heavy full-color cookbook with lots of mouth-watering pictures of various meat dishes to attempt.

The OptiGrill uses a somewhat fancier version of George Foreman’s clamshell design; instead of just a grip to open the lid, there’s a prominent handle with an array of membrane buttons and a large circular “doneness” indicator. The whole unit has a pretty substantial feel to it, and the hinge mechanisms feel very tight. Clever swiveling hinges allow the top grill plate to lay flat on food of varying thicknesses for more even cooking, rather than pinching it on the hinge side. The removable 100 square-inch grill plates have thick bars for a good sear, and a downward slope drains fat away from the food. The cord running to the top grill has been wrapped in a spring for strain relief, giving it a cool industrial look. The included drip tray has a very large capacity, and attaches directly to the grill to prevent messy misalignment and overflows. This seems like such a “well, duh” feature, but we’ve never seen it before, and it’s a very welcome addition.

Nothing makes us sadder than throwing away good meat that we didn’t get around to cooking. Tossing it in the freezer will extend its life, but also means it has to be thawed before tossing it on the grill, which really reduces the spontaneity behind “I want steak tonight.” When we heard that the OptiGrill could cook frozen meat perfectly, we knew that had to be our first test. A 1.5-inch hard-frozen sirloin tossed directly on an outdoor grill without special intervention will end up either cold and raw in the middle, or charred beyond recognition. For the OptiGrill, it was a simple matter of powering it up, pressing the steak button, the frozen button, then the OK button. The doneness indicator throbs pink while it’s pre-heating, which takes less than five minutes. Thankfully, there’s a handy cheatsheet surrounding the doneness indicator for the meanings of all the different colors. When it turns blue and beeps, it’s ready to cook. We opened it up, put the steak on, and closed the lid.

The doneness indicator pulses through a number of different stages, and starts chirping like a diseased bird and flashing yellow when it hits rare (about 15 minutes past preheat for our frozen steak). It’s not the most pleasing sound in the world, but it does its job; allowing you to cook to desired doneness without obsessing over the grill. When the rare indication showed, we measured the center of the steak at a cool 115 degrees, then closed the lid for another few minutes until it indicated medium. The center of the steak was right at 150 degrees, at which point we pulled it, let it rest for a couple of minutes, and consumed. For a frozen sirloin, the results were about as good as we could hope for, and in very reasonable time: from cold grill to beautiful, tasty steak in less than 30 minutes.

Whether you’re after a stacked panini or a simple grilled cheese, the results are quick and tasty.

We had similar results with frozen chicken and hamburgers. If we had one complaint about cooking frozen meats on the OptiGrill, it’s that it’s hard to get a good sear; however, this can be easily fixed with a little manual intervention. Just remove the meat one notch below where you want it and let the OptiGrill heat back up on manual, then place it back on for a minute for a nice sear. Fresh meats get a great sear immediately, so this minor complaint is really limited to frozen meats.

Our results with fish were a little more mixed. The fresh salmon-tail fillet we tried violated one of OptiGrill’s rules: The meat needs to be of uniform thickness for best results. Our experience backs this up; the thin parts of the fillet were overcooked and rubbery, while the thickest parts were more sushi-like. Choose your fish carefully, though (a nice tuna steak, perhaps) and the OptiGrill should do a bang-up job.

We tested the sausage mode two ways with Polish sausage: whole and butterflied. The OptiGrill cooked it up perfectly both ways. Sandwich mode also works phenomenally. Whether you’re after a stacked panini or a simple grilled cheese, the results are quick and tasty. The weight of the top grill plate does compress the bread quite a bit, though, so thicker bread slices will make for a softer sandwich.

Finally, there’s a manual cooking mode that turns the OptiGrill back into a dumb countertop grill for veggies or other items where the automatic timed cooking and thickness-sensing adjustments aren’t appropriate.

The OptiGrill is surprisingly easy to clean. Both top and bottom plates can be removed at the press of a button, and are easily cleaned up with a plastic brush and a little water thanks to their nonstick coating. T-Fal claims that the grill plates are dishwasher safe; we were a little skeptical that they’d get clean in the dishwasher, but even after our somewhat ugly fish cook, the plates came out of the dishwasher as good as new. The drip tray is easily popped out and cleaned as well, and the rest of the unit stays pretty clean during cooking, since any spatters are contained to the grill plates.

The biggest thing to watch out for when cooking with the OptiGrill is food with non-uniform thickness. There’s only a single thickness sensor (based on how far apart the cooking plates are from what’s placed between them), so if you have lumpy meat of varying thickness, the Optigrill will most likely overcook it. From a food-safety perspective, it’s better overdone than underdone, but it’s a problem easily avoided if you choose your meat carefully, or get it down to a more uniform thickness by slicing or pounding. Some of our frozen chicken cutlets were a little lumpy, and by the time we pulled them off at the medium signal, they were at an internal temperature of around 205 degrees; a little overcooked for our tastes. Another lesson in the importance of uniform thickness. If you’re a fan of bone-in ribeye steaks or pork chops, the OptiGrill is not going to handle those well, either; the bone will affect the thickness sensor and likely cause the meat to cook unevenly.

Depending on what’s being cooked, there may also be a bit of smoke and vapor that comes up during cooking. It’s a good idea to have some ventilation handy; we did most of our cooking under a range hood with the fan running to get everything outside.

T-Fal makes some big claims for the OptiGrill: cooking unattended, handling frozen meat with the press of a button, and easy cleanup. We have to admit that we were skeptical, but the OptiGrill lived up to our expectations pretty well. At a suggested retail of $179, it’s more expensive than most other countertop grills of comparable size, but we think the added automatic cooking features and clever design touches easily justify the extra expense. As long as you’re willing to stick with boneless meats of uniform thickness, we wholeheartedly recommend the OptiGrill as a great addition to your kitchen arsenal.

Flippy the fast-food-prepping robot goes on sale for $30K

Intel adds another piece to the Arc puzzle, but the most important parts are missing