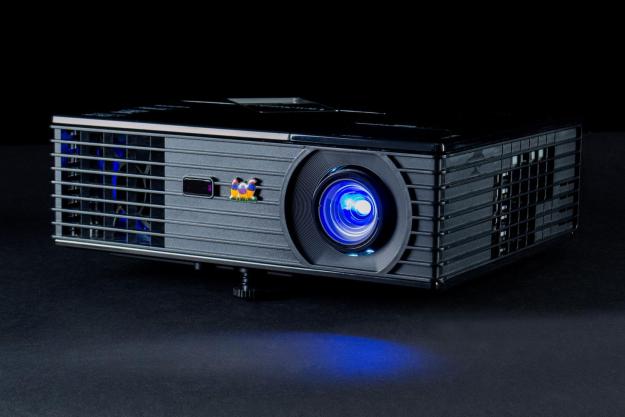 “If you’ve been looking to get into some big-screen action for under $1,000, Viewsonic’s PJD-7820HD is just the ticket.”

I have a little personal rule that I adhere to as a reviewer of consumer electronics: If I don’t already know how much a review subject costs before I start evaluating it, I avoid finding out until my review is almost done. Of course, this isn’t always possible, but I do enjoy keeping myself in the dark when I can. I like get used to a product, evaluate its performance, weigh its pros and cons, and then decide how much I would be willing to pay for it. Very often, I deem the product worthy of less of my cash than manufacturers do. But every so often, the opposite happens, and I realize I’ve got one of the best deals out there on my hands.

The Viewsonic PJD-7820HD falls firmly in the latter category.

…when I found out this thing was selling online for under $700 from some retailers, I just about pulled a sit-com style coffee-spitting maneuver…

The 7820HD was pitched to me as an affordable (AKA budget-friendly, AKA entry-level, AKA usually underwhelming) 1080p 3D-capable projector with enough juice to crank out 3,000 ANSI Lumens of light. If you don’t happen to be up on that particular unit of measurement, then you will be interested to know that 3,000 Lumens is bright enough to go toe-to-toe with sunlight and still be seen. And any projector that can pull that off and still get marketed as “affordable” has my attention.

I enjoyed using the 7820HD for a few months and had already decided it performed above and beyond what I expected from a budget projector. But when I found out this thing was selling online for under $700 from some retailers, I just about pulled a sitcom-style coffee-spitting maneuver of epic proportions. I knew then that I had to write this review before holiday shopping got heavy.

Here’s everything you need to know about Viewsonic’s PJD-7820HD projector.

The 7820HD’s light weight had me concerned right out of the box. Much like a camera, the heavier a projector is, the better its optics tend to be. Better optics equal better picture. The 7820HD was so light, it felt like one of those $20 Hello Kitty digital cameras you pick up on a whim during the holidays. (Not that I’d know what that’s like … I’ve just … heard things.)

On the other hand, at just 4.6 pounds the 7820HD is highly portable, with a footprint about the size of a sheet of paper. You can put it just about anywhere – boardroom table, coffee table, nightstand, whatever.

In the box with the projector were a power cable, VGA cable, remote control with batteries, a Quick Start Guide, and a DVD with a Wizard Guide and user guide.

Oddly enough, Viewsonic positions this projector on its website as “Ideal for Small Office, Home Office” with more strength than its meek suggestion of home use. But the 7820HD absolutely has the goods to deliver a fun home-theater experience. In addition to the aforementioned brightness, Viewsonic claims this projector delivers up to a 15,000:1 contrast ratio. Even if that is an inflated figure, it begins to make the 7820HD look good enough to produce a solid image in dark environments.

At just 4.6 pounds the 7820HD is highly portable, with a footprint about the size of a sheet of paper.

But then there’s a whole bunch of capabilities that start making the 7820HD look like the ultimate plug-n-play projector. It can throw up a 100-inch diagonal image at a distance of just 8 feet, it has a generous amount of keystone correction (+/- 40 degrees) for those times when the projector can’t be at the same level as the screen, and it has a 1.3x manual optical zoom with manual focus to aid in flexible placement as well. With specs like that, it’s easy to see someone pulling this projector out for a big game party or a backyard movie night.

Most folks will use this projector’s single HDMI input, but for those with older components, the 7820HD offers some serious legacy connections, including two VGA inputs, a VGA monitor output, composite video input (RCA) and, dig this, an S-Video input, just in case you want to hook up your Laser Disc player with the best possible connection. (Hey, don’t laugh.)

The 7820HD will do 3D Blu-ray discs, but you’ll need some active 3D glasses to make that work. [We originally reported this projector required passive 3D glasses. This was an error and has since been corrected] There are onboard speakers, but we’ll tell you right now they are good for nothing but a very small conference-room presentation, and even that is a questionable proposition. You’ll want to plan on scoring some small powered speakers or integrating this into a larger home theater setup with a proper sound system in order to get the proper big-screen effect.

Control of the unit can be handled using onboard buttons, but using the remote is far easier. With the remote, you can power on the projector, switch inputs, access and navigate its full menu, adjust the sound volume, and a whole host of clever if less usable features.

While the projector will work fine on a table-top, it should be ceiling mounted for a dedicated theater space. For this review, we started out by taking this projector around our office and home, projecting everything from Blu-ray movies to YouTube videos to spreadsheets (ZZzzz…) on whiteboards, white walls, not-so-white walls and proper projection screens. Then, we mounted the projector upside down in our testing lab, 8 feet from our 100-inch retractable Da-Lite 16:9 projection screen. True to Viewsonic’s claim, the 7820HD worked perfectly at that distance.

We were surprised at how bright the 7820HD was able to get in our office spaces with direct sunlight pouring in and no shades drawn. The image was totally usable in a pinch, though admittedly far less than ideal.

The 7820HD absolutely has the goods to deliver a fun home theater experience.

With just a touch of light control, the 7820HD’s image began to pop. This projector is completely capable of displaying a big, visible image on a (ideally white) living room wall for a life-size game experience. In fact, with three 60-watt bulbs glaring from a ceiling fixture just 5 feet from our screen, people were still commenting on how bright the image was at 100 inches.

But things really began to get dazzling when we put the projector in a windowless room and killed the lights. With dark image areas finally allowed to be black, the projector’s contrast capabilities came into focus, and while the performance wasn’t up to videophile standards, the image quality was truly impressive by most folks’ standards.

While the 7820HD was in our home theater, we viewed more than 20 feature films and logged over 100 hours of video game time, and the experience was consistently awesome. My family has plenty of experience viewing gorgeous 65-inch televisions, but there’s something deeply immersive and entertaining about sitting 6.5 feet from a 100-inch projection screen.

Disney Pixar films are a favorite around our household, and the bright, beautiful animated features were a treat for all eyes, young and old. The one exception was Brave, a film noted for its abundance of dark scenes. Here the 7820HD’s lack of fine shadow detail was apparent. We experienced more of the same watching Prometheus, too. But, hey, these are videophile problems. You have to work pretty hard to notice this stuff, and most of the time you’ll be too awestruck by the projector’s brightness to care anyway.

Color, too, was especially enjoyable. While we doubt this projector’s color output is particularly accurate, we never felt like we had to make adjustments in order to enjoy it. With some basic adjustments to one of the projector’s basic picture pre-sets, we think most users will be perfectly satisfied. Besides, this isn’t the sort of projector you hire an ISF-certified calibrator to adjust. The service fees are way too close to the price of the projector itself for that to make any sense, but aside from that, this is the sort of projector you purchase for a respectable, home-brewed theater setup, not a posh in-home Cineplex.

…there’s something deeply immersive and entertaining about sitting 6.5 feet from a 100-inch projection screen.

There are a few things potential 7820HD owners should be aware of. First off, the 7820HD’s fan makes a little noise. At about 49 db (measured at 1 meter) it may take some getting used to, but we didn’t find it causing a problem unless we had to keep the volume of our speaker system down super low.

Also, because the 7820HD is a DLP projector and uses a six-color color wheel, those who tend to be bothered by what is known as the “rainbow effect” may have trouble with this projector. If you’ve ever looked at an older DLP television and been bothered by this, you’ll want to plan on killing the projector’s Bright Color function or just steer clear entirely and look toward an LCD projector instead.

Finally, this projector’s infrared remote control sensor is a little finicky. You really have to line the remote up with the projector just right to get it to work, which we found to be a hassle sometimes.

As for the competition, the Optoma HD131Xe offers similar performance (with less total brightness and a higher contrast ratio) for about $60 more online.

If you’ve been looking to get into some big-screen action for under $1,000, Viewsonic’s PJD-7820HD is just the ticket. This projector’s offers a unique blend of performance, features and price, giving it huge marks for value. Tack on an unusually long three-year warranty, and the 7820HD becomes one of the smartest choices available in entry-level projectors. In short, if you’re developing a short list, either make sure the PJD-7820HD is on it, or just pull the trigger and go for it. We think you’ll be pleasantly surprised.