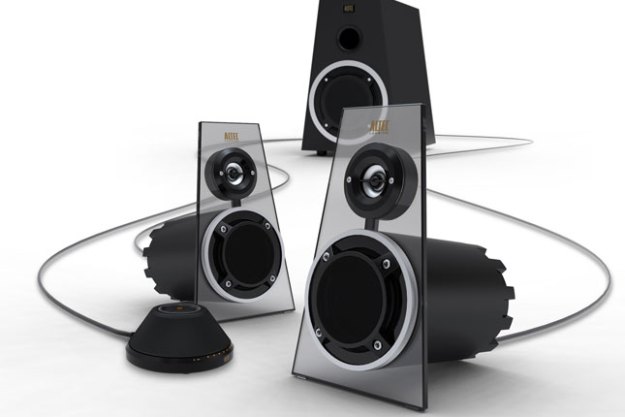 That old adage about children being seen and not heard should be flipped around for speakers: They should be heard, not seen. In an ideal world, anyway. But until the Invisible Speaker becomes reality, a lot of manufacturers have taken to interesting ways of making those plastic chunks that spit out music look as good as they sound – like making them transparent. From Harmon Kardon’s iconic SoundSticks to Ferguson Hill’s FH007 and the stunning GLA-55, glass (and its more practical buddy acrylic) really catches the eye as much as the ear. Altec Lansing gives the trendy see-through look some rumble with the capable MX6021, a 2.1-channel PC gaming setup that combines a room-rattling subwoofer with a pair of exceptionally chic satellites you won’t be ashamed to prop up beside your Post-It dispenser.

The MX6021 comes with two rather runty desktop speakers, each standing just under nine inches tall, and one massively disproportionate subwoofer that seems to have been hogging all the chow while these three were growing up on the speaker farm together. It measures roughly 16 inches tall, 10 inches wide, and 14 inches deep, devouring about the same chunk of under-desk room as a mid-sized tower. While that might not be an issue for those with spacious desks, anyone with a desktop PC and drawers already hogging space under their desk (or God forbid, in a dorm) might find legroom impinged upon when the MX6021 moves in and starts collecting foot scuffs.

A UFO-shaped remote just slightly larger than a hockey puck offers a power button, headphone jack, aux input, and volume control from the desktop, not to mention separate bass and treble adjustment. Altec claims the MX6021 system puts out about 200 watts.

Unlike some other clear speaker designs, the MX6021 treats the smoked acrylic merely as a facade – the enclosure for each driver rests in a gloss black tube. Both desktop speakers lean back on coffee-can sized cylinders on the bottom, which house the 3-inch midrange drivers. A smaller one about the same diameter as a Coke can (but only about an inch deep) sits on top for the 1-inch neodymium tweeters. Only a thin strip connects them, maintaining the illusion they’re both floating in the glass. Exposed hex screws and a bright faux metal ring around the midrange driver help add accent to an otherwise very dark design. The subwoofer gets the same style ring around its 6.5-inch driver, but otherwise sports a more subdued color scheme. No clear plastic here: It’s basically a monolithic black block.

Bottom line: In a field that mostly consists of black plastic boxes peppered with drivers, Altec has really managed to give the MX6021 a distinct and attractive look. We also liked how short the speakers are, which kept them from interfering with overhead shelving the same way the skyscraper Creative GigaWorks T40 did.

Setting up the MX6021 takes no longer than five minutes. Every component strings together with color-coded cables that plug directly into the sub, which itself just needs a stereo cable running to a PC and power. The color coding makes setup a breeze, but unfortunately, the cables are hardwired directly into each speaker, and use proprietary jacks (which look like S-video connectors) on the other end, making it impossible to extend them. Each cable measures 6.5 feet, which should be ample for most desktops, but might limit your options for alternative setups.

Press the orange power button in the center of the MX6021 remote, and be prepared to stand back. These speakers don’t turn on, they detonate.

The size of its subwoofer belies the power on tap. At full volume, they’ll put a good sized room in party mode and downright push you out of smaller spaces, like a bedroom.

Unfortunately, like a lot of PC speakers, they also tend to distort when pushed to the fringes. The subwoofer seems up to the task, but the tiny satellites begin to break apart at max volume. The effect isn’t severe enough to become unusable – they would still make fine party speakers pumping AC/DC when everyone has a beer in hand – but don’t expect to audition at house-shaking levels without a little disappointment.

At more moderate levels, the MX6021 sound significantly more put together. Bass rumbles up from the woofer with authority and joins acceptable midrange and bright treble from the satellites to form a sturdy overall sonic image. Some might actually find the bass overwhelming when set to neutral along with treble, but individual controls for both make it easy to adjust downward.

The sharp clicks and clacks from electronic music, like Radiohead’s shimmering 15 Step, come through with clarity, but not so much emphasis that they become fatiguing. A bit lower in the frequency range, we found the presence of male vocals and horns somewhat lacking, diminishing the sense that you’re “there,” but a little equalizer tweaking can help compensate.

As gaming speakers, the MX6021 add an element of realism and punch. Blasting apart squads of space marines with the Baneblade tank in Dawn of War never seemed more satisfying than with the MX6021 supplying the requisite chest-thumping thud. Though it’s more than adequate for all genres, first-person shooter fans, might want to consider a 5.1-surround system to provide a more immersive soundscape that can help locate enemies.

Our biggest complaint about the MX6021 sound actually becomes apparent when they’re not playing music at all: The speakers emit an audible hiss at volume levels just about half, even when not plugged into any source. It’s not enough to notice in a room with any source of ambient noise, even just air conditioning, but for exceptionally quiet environments like a home office, it might become an issue.

Having a physical controller on the desktop not only makes it easier to adjust your speakers on the fly, it also brings the headphone jack forward, which is especially important for using earbuds with typically short cords. However, Altec tried too hard to make this one clever and ended up washing out many of the advantages.

The biggest irritation comes from the volume adjustment. You twist an outer wheel to turn it up and down, but rather than merely spinning it and leaving it in place like an ordinary volume knob, it snaps back to its original position. The further you twist it, the more the volume change “accelerates” up and down. Even after overcoming the initial confusion, it feels incredibly imprecise to adjust, and fighting spring tension with every turn (rather than just spinning freely) wiggles the puck on the desk. Contrary to common sense, the volume indicator lights also move right as you increase volume by twisting the dial left, and vice versa.

The volume and aux jacks have been strangely put on the side, 90 degrees from where the heavy control cable snakes to the back of a desk and down to the sub. After enough tugging from a connected pair of headphones, the puck always twists its way around until the jack faces forward, where Altec should have put it from the beginning. This throws the print on all the buttons off kilter, and the rear cable awkwardly pokes out the right side instead of the rear.

For a dainty-looking pair of see-through speakers, Altec Lansing’s MX6021 deliver sound with freight-train power. Credit the thoroughly home-theater-sized box down below, which delivers bass right in proportion with its epic dimensions. While audiophiles might wince at the distortion when the volume hits max and a subtle lack of presence at more reasonable volumes, gamers who want their ears to ring from gunfire and to rock out between Call of Duty games will find their fix in the MX6021. For the $200 price tag, though, we would appreciate standard speaker cables, silence when powered on and not in use, and the desktop remote, which technically functional, needs a total redesign.