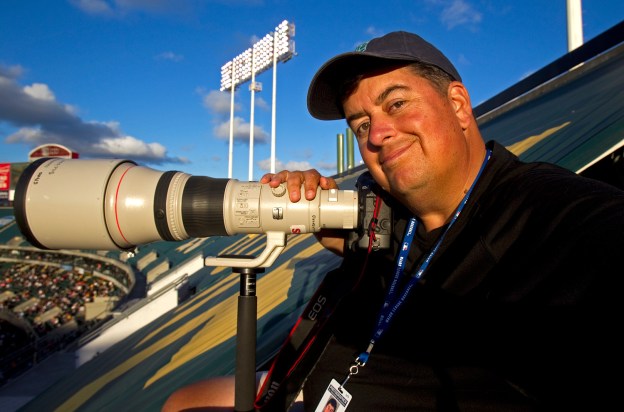 For many kids who grow up living and breathing baseball, they probably dream of someday becoming an MVP or franchise owner. While Brad Mangin is neither of these, he has been living his dream job for more than 20 years: A lifelong baseball fan from San Francisco’s East Bay region, Mangin spends much of his time as a sports photographer shooting the local teams – the San Francisco Giants and the Oakland Athletics – for the likes of Sports Illustrated and Major League Baseball.

Over the course of his career, Mangin, who is currently a freelance photographer, has served as a staffer for the Contra Costa Times in Northern California, a stringer for The Associated Press, and a trading card photographer for The Upper Deck Company. His lenses have captured everything from the Olympic Games to World Series Championships, including his hometown favorite – the Giants – and their 2010 and 2012 wins. He regularly speaks about his passion in workshops and lectures, and in 2011 he published his first book — a 128-page hardcover coffee table book on the Giants’ 2010 World Series win called Worth the Wait.

But of all the baseball moments he has photographed, and for all the seasons he has been in the stands to watch his favorite sport, 2013 may mark the biggest season yet for Mangin. While he has already been hard at work at spring training, gearing up for another grueling schedule filled with 12-hour work days, Mangin is also preparing to release two new books with publisher Cameron + Company. Both due to be released on April 23, Never. Say. Die.: The San Francisco Giants – 2012 World Series Champions captures the team’s winning season, while Instant Baseball: The Baseball Instagrams of Brad Mangin features iPhone photography Mangin took throughout the 2012 season, from spring training to the World Series.

We chatted with Mangin about his career as a sports photographer, his continued love for baseball, and why new apps like Instagram can be a great outlet for a professional photographer.

When did you know you wanted to be a sports photographer? What sparked that interest?

There’s no way I started to be a sports photographer. I just started with photography in high school and wanted to be a newspaper guy. I studied photojournalism in junior college and at San Jose State in the [1980s].

So what led you to this path after you got started in the world of photojournalism?

Well, when you work for a newspaper, you do everything, including sports – lots of Little League and high school stuff. I was a sports fan. I love sports. I love baseball. When you work at a newspaper, you do a little bit of everything, but the sports is what I liked the best. Eventually I was able to thrust over to that direction and started freelancing 20 years ago, just doing sports, and I’ve been doing it ever since.

When you got further along in your career and got a chance to focus on sports, why did you decide on baseball, in particular?

I just love baseball. I grew up a Giants fan here in the Bay Area. It was always my favorite sport. We’re lucky here – just like New York, Chicago, and L.A., it’s a two-team market, so we’ve got both leagues coming through here. There’s a game every day for six months, and so there’s a chance to get a lot of work because there’s always a game. It’s something I just really went after, because I love doing it. It’s a very hard sport to do, because it’s a lot of sitting around and waiting for something to happen. But I know the game, I love the game, and I enjoy the challenge. Over the years, I’ve learned to become better at it. From the first pitch of spring training to the final out of the World Series, I’ll shoot at least 90 games a year, sometimes 100. It’s a lot of fun. I love it.

Does the job take you on the road?

Yeah, I mean, no one has any money anymore. I used to in the 90s. This day and age, I do spring training in Arizona. I was there for a couple of weeks for Sports Illustrated. I just finished doing the World Baseball Classic here in San Francisco. During the season, mostly I’m home. If the Mariners are ever good again, I’ll go up to Seattle. I used to go up to Seattle a lot. Sometimes I’ll go down to L.A. But because there are always games here and both leagues come through, during the season it’s mostly local. And then I do the World Series every year, no matter where it is, for Major League Baseball. I’ve done the last 13 World Series for them.

Do you enjoy working in the Giants’ and Athletics’ ballparks?

Our two parks in the Bay Area are great parks to work in. I’ve been around a long time, so I know all the security people, the PR people, and I’m able to do a lot of things here that you can’t do on the East Coast, where the people are uptight and there’s a lot more rules. It’s a lot more relaxed out here in California.

Do you get to know the players on a personal level?

A little bit. I don’t do portraits, so I don’t do a lot of one-on-one time. I talk to some guys, but they’ve got enough bullshit to deal with and are busy dealing with writers and stuff that are covering the beat. I don’t need to waste players’ time. You talk to some, but you’re not hanging out with them.

What is a game day like for you? Can you walk us through your schedule?

A regular day – a game starts at 1 p.m. I’m usually there by 10 or 10:30 a.m. for batting practice. I shoot batting practice, have a quick lunch in the press room, and then game starts at 1. And depending on who I’m working for, I have three hours of computer work to download, edit, and caption my pictures. So I’ll leave my house at 9 in the morning and I’ll finish work at 9 at night, usually, depending on the game.

What does it take to score an incredible baseball photo?

It’s hard. I look for great light, great backgrounds, great faces, great moments. You can have a great moment but a shitty background or bad light. It’s rare that you can get everything where it all comes together. I have very high standards for myself. I shoot a lot of games, and I might get five pictures over a season that I think are really, really special. I take a lot of good pictures, but I’m a hardass. Pictures have got to be really, really good to make me happy. They’ve got to be perfect. That’s my goal – to get something really special.

After doing this for so many years, are you still able to enjoy baseball as a spectator?

Love it! I’m a Giants season ticket holder with a bunch of friends. We just had our draft last week. I go to a bunch of night games when I’m not shooting.

So what does it feel like right now, on the verge of a new season?

It’s exciting. It’s fun. It’s neat to have done spring training, and I need spring training after not shooting over the winter. I’m very excited. It’s a fun time of the year. I get to see my friends at the ballpark, get to be outside in great weather, and enjoy baseball games.

You’ve had a prominent Instagram presence and even have a book coming out dedicated to that work. Why is Instagram something that’s so important to you?

It gives me something different to do. It’s a fun, creative outlet. When you’re a freelance photographer, you rarely get published. The whole social networking aspect of it –sharing your pictures – is a lot of fun for me. It’s been fun going to ballparks and just looking for things that would make a good square picture, deciding if I’m going to make it black and white, or color. I’ve just been having a blast.

My book comes out next month. I’ve been shooting like crazy this week at the [World Baseball Classic]. I was getting guys to pose for portraits with my phone. I’ve been doing regular sports photography for years. People always say, “Well, you have that expensive camera and big lens.” When I do my stuff with my iPhone, I’m using the same thing everyone else is. It’s been a fun challenge for me to show people it’s not necessarily the camera; it’s the photographer – that you can make really great pictures, even with a phone. I have a lot of people that don’t believe me. They send me emails that say, “There’s no way. You’re using your real camera and importing your pictures into Instagram.” No. These are all with my phone. I’ll show you the files.

It’s just fun – photography is supposed to be fun. I’m 48 years old. I’ve been doing this a long time, but it’s been a blast. It’s the immediacy. I mean, all three games the last three nights, I’ve been shooting on assignment for Sports Illustrated, but I’m also Instagramming, sharing on the S.I. Instagram feed, which has 130,000 followers. It’s like, “This is happening right now in the Dominican dugout. This is Carlos Santana posing for a photo during batting practice right now in the Dominican dugout. This is one of the Puerto Rican players right now. This is going on right now.” People really get a kick out of that, and I think it’s fun.

Despite being involved in something that’s inherently digital and immediate, is it still important to you to be taking those photos and putting them in print, in a decidedly more permanent format?

Yeah, ’cause I’m old-school. I love print. [But] there will be an e-book version of the Instagram book available on the iTunes Store that will have bonus content. It will have all of my spring training and World Baseball Classic stuff from this year. The hard copy book closed in November, but the e-book version will have all this bonus material, which will be fun. [But] the hard copy is pretty special to be able to hold in your hands.

How to turn off the camera sound on an iPhone
GoPro takes to the skies with the Hero10 Black Bones
This MagSafe iPhone rig aims to give your videos a more pro look
The best camera phones for 2022
Netflix sheds light on its ‘approved cameras’ for filmmakers
Best Prime Day Drone Deals 2022: What to expect this week
How to remove the background from an image
Instagram boss says to expect even more video content
6 awesome Earth images captured from the ISS in July
This GoPro Hero 10 bundle is $100 off at Best Buy today
The best iPhone tripods for 2022
Watch this Mavic 3 drone soar above the world’s highest mountain
How to watch DJI unveil an all-new drone today