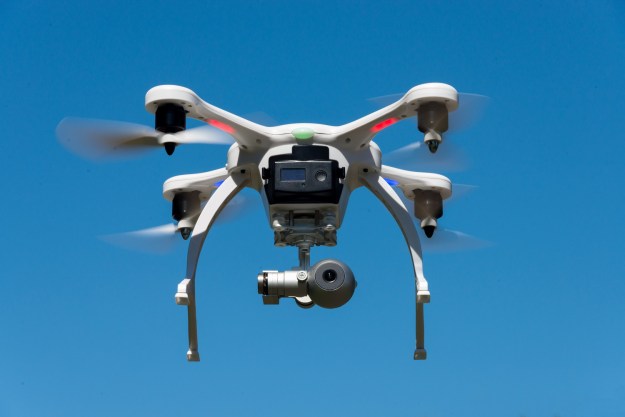 If the name Ehang rings a bell, it’s probably because you’ve heard or read about the company’s 184 Drone — aka, the flying taxi that was unveiled at CES earlier this year. The company may be best known as the purveyor of a yet-to-be-released sky taxi, but it also makes a number of smaller drones that don’t carry people. The latest of these is the Ghost Drone 2.0 — a new and improved version of the company’s original drone that’s designed for first person view flying. We took it for a spin to see how it stacks up against some of the more popular drones on the market.

Out of the box, the Ghost Drone 2.0 sports a decent set of specs and features. It provides about 25 minutes of flight time, a maximum operating range of about one kilometer (0.62 miles), maximum speed of about 43 miles per hour, and a gimbaled 4K camera that helps you capture awesome aerial footage of your flights.

The included first person view goggles allow you to see through the eyes of the drone’s camera.

That’s all fairly standard for drones these days, but one thing that sets the Ghost apart from the competition is the fact that it comes with a set of first-person view (FPV) goggles that let you see through the eyes of the drone’s camera. As an added bonus, they’re are also equipped with tilt sensors, so when you move your head up or down, the drone’s camera will move accordingly. How cool is that?

The drone’s most notable feature is that it doesn’t come with a traditional joystick controller. All piloting is via Ehang’s accompanying smartphone app (Android | iOS) — which allows you to fly in a variety of different modes, including Waypoint, Avatar, Follow Me, and even Manual mode.

The Ghost Drone 2.0 feels mediocre in our hands. You can’t expect too much from a drone that goes for $400 (without FPV goggles) — but even compared to DJI’s cheapest offerings, it’s on the flimsy side. While the arms and legs are sturdy enough to survive short drops and unintentionally hard landings, they don’t feel like they’d handle a 30-foot plummet and live to tell the tale. This is especially troubling when you consider that the drone isn’t equipped with any kind of automated obstacle avoidance system.

That said, Ehang backs the Ghost Drone with one of the most robust warranties we’ve ever seen. For your first year of ownership, the company will repair the drone free of charge as long as it wasn’t disassembled or modified in any way. So, while the drone might not be the sturdiest or most durable one we’ve ever encountered, it’s reassuring to know that hitting a tree or crashing on asphalt isn’t the end of the world.

With optimal conditions, Ehang says the Ghost Drone will fly for about 25 minutes — but that’s without any accessories, like the camera or gimbal. Our demo unit was weighed down a bit more, so when we put it through a stationary hover test, it managed 21 minutes before the drone’s autopilot freaked out and brought it down for a landing.

Ehang has succeeded in its mission to create a drone that even the most inexperienced person can fly.

Push the drone harder and it won’t last as long, of course. We kept it in the air for an average of about 18 minutes with normal flight — and even with plenty of throttle movement and dramatic pitching, it never dipped below 17 minutes of airtime.

One thing we really enjoyed about the battery is that it comes with a built-in LCD screen; when you plug it in for a recharge, it can estimate the approximate time before you reach 100 percent. This is a godsend, as it alleviates the need for periodic checkups on your recharge progress. Once you plug it into your wall, you know how long it’ll be before you can get back to flying.

As for range, Ehang claims that the Ghost Drone can travel roughly one kilometer from the pilot before it loses communication. Ehang’s recommended working distance is only 500 meters, and in our tests, we could only take it out to around 300-325 meters (about 1,000 feet) before the drone lost radio communication. It’s also worth mentioning that when you fly out of range, the drone doesn’t simply fly back toward the pilot until it reestablishes a connection — it automatically flies all the way back to the starting point before it relinquishes control again, which is rather annoying.

Piloting the Ghost Drone 2.0 is a bit different than flying a traditional drone. In an effort to make it more approachable for beginners, Ehang decided to forego the dual-joystick controller. Instead, the drone is controlled via commands issued from your smartphone or tablet.

Using an accompanying smartphone app, users can choose between two main flight modes: Touch To Go and Avatar. In Touch To Go, Ehang’s version of waypoint flying, you’re presented with a satellite map of your surroundings. Simply tap the map to set your desired destination, then tap again to send the drone there. It’s incredibly simple, and while it’s not a particularly exciting way to fly, we found that Ehang actually executes waypoint mode better than most other drone companies. Even the most novice users will have no trouble flying in this fashion.

The second mode — called Avatar — is much more fun. Using it, control of roll, pitch, and yaw are mapped to the orientation of your smartphone. Tilt your phone forward, backward, or side to side, and the drone will fly in that direction. To control yaw, you simply turn your body; Ghost Drone 2.0 will instantly adjust its orientation so that it’s facing the same direction your phone is pointing.

This control scheme makes for highly intuitive piloting. The learning curve is practically non-existent, and Ehang has succeeded in its mission to create a drone that even the most inexperienced person can fly. But such simplicity comes at a cost: What you gain in simplicity you lose in precision.

The tilt-to-fly setup is quite fun (especially when paired with FPV goggles), but it’s also on the squirrely side. Starting and stopping maneuvers by tilting your phone feels mushy and imprecise, so you can’t fly with as much confidence and control as you might with a pair of joysticks under your thumbs. Altitude is controlled via a slider on your touchscreen, which also feels imprecise and is difficult to find when you have goggles on your face. Once you take your thumb off the slider, it’s hard to find until you take the goggs off.

The camera on this sucker is capable of shooting in 4K, and while it’s not quite as awesome as the one’s you’ll find on DJI’s Phantom series or Yuneec’s Typhoon drones, it’s not bad for a drone in this price range. The Ghost Drone’s shooter boasts a 120-degree field of view, captures images in 4K at 24 frames per second (or 2.5K at 30 fps, or 1080p at 60 fps), and grabs 16-megapixel stills. We never had super precise control over the drone’s flight, but we took decent shots with the onboard camera nonetheless.

What really makes this drone worthwhile isn’t the camera — it’s the included FPV goggles to which the camera transmits video. These suckers let you see what the drone sees from a maximum distance of about 900 feet. To be honest, they aren’t great: They don’t have a huge field of view and the transmitted video isn’t very high quality. We’d take a pair of Fat Shark Dominator goggles over these any day … but they do have one feature that makes them pretty damn fun to play with: motion tracking.

Thanks to built-in accelerometers, the headset can not only tell when you move your head up or down, it can send that information to the drone and use it as movement command for the camera. If you look up, the camera pans toward the sky. If you look down, the camera angles toward the earth. It’s a super cool feature and makes the FPV flying experience more immersive, but unfortunately you’re limited to up and down — the headset can’t track left/right movement or tilting. What the hell, Ehang?

There might be hope though. The headset’s accelerometers can sense motion along three axes — it’s just that the camera isn’t designed to pan left or right on the drone. Theoretically, Ehang could release a camera upgrade that could enable horizontal head tracking. The camera on the Ghost is actually fairly easy to remove and could easily be swapped for a new one — although we’re not sure if the company has any plans for hardware upgrade options.

While the Ghost Drone is definitely fun to fly, it ultimately lacks the precision and tight controls necessary to make it useful for anything more than casual recreational use.

Yes. In fact, there are a handful of them. For 1,000 bucks, you can get you a mid-level DJI Phantom and a pair of Fat Shark FPV goggles, which would give you a comparable experience with a lot better specs and advanced controls. Another great option is Parrot’s Bebop 2 FPV, which offers an excellent out-of-the-box FPV experience with better range and more precise piloting.

The drone itself will likely keep flying for a few years (assuming you don’t crash it into a lake), and if Ehang keeps pushing firmware updates, we have no reason to believe that the Ghost Drone 2.0 wouldn’t last for half a decade or more. However, due to the rapid pace of advances in UAV technology, the specs and capabilities of this drone have already been overshadowed. There’s a high likelihood that this drone will be obsolete in two years or so.

Probably not. If you’re looking for a relatively cheap FPV rig that doesn’t have a steep learning curve, this bird might be what you’re after — but if you’re even the least bit interested in pushing beyond basic controls and doing more with your drone, you’d be wise to explore other options.