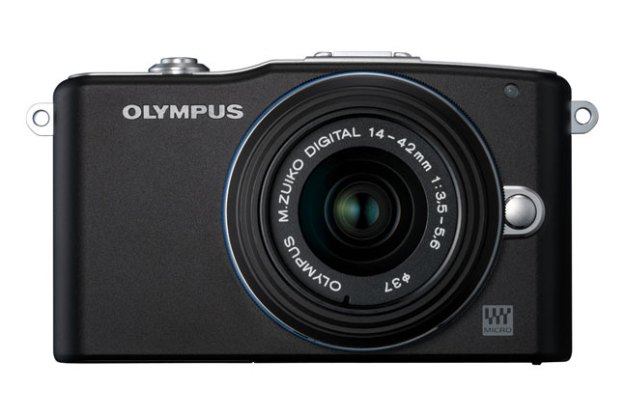 “We recommend the E-PM1 for people considering a responsive, compact interchangeable lens camera that takes good pictures and videos.”

Mirrorless interchangeable cameras are making headlines with new models arriving almost weekly. We test the Olympus PEN E-PM1 which is the newest, smallest and cheapest one currently available to see if it’s your next dream camera.

Olympus recently introduced three new PENs ranging from $499 to $899 and the Mini is the lightest and most affordable of the bunch. All three have 12.3-megapixel Live MOS Micro Four Thirds sensors. Of course you have to give something up to save money. In this case, it’s a titling LCD screen, built-in flash, faster focusing and several other features. That said, the PM1 is the most affordable mirrorless interchangeable lens camera available at $499 for the kit including a 14-42mm lens (24-84mm 35mm equivalent) and attachable flash. By comparison the next closest is the Sony NEX-C3. This 16.2MP APS-C sensor camera is $599 with an 18-55mm lens (27-82.5mm). There are other differences but the point is this—if you want to buy a light, interchangeable lens camera on the cheap, the PM1 is your baby.

We have to admit the body of the PEN Mini is very sleek, solid and compact with a minimal amount of buttons. Our review unit was black, but it’s also available in five other colors—purple, pink, brown, white and silver. Pick your poison. The camera measures 4.3 x 2.5 x 1.33 and weighs a svelte 9.3 ounces with the battery and card. The front is as clean as can be with just an AF Assist lamp, lens release button and two low-key logos. Of course the dominant front fascia feature is the lens opening and in this case it accepts Micro Four Thirds glass. There’s a good selection available although not nearly as many as Nikon/Canon who have been making lenses for about a thousand years. The kit lens is your basic 3x zoom and here it’s 28-84mm. It’s a newer design optimized for video since its silent, an important point as we can attest after testing many cameras that added their own soundtrack as they zoomed and hunted for focus.

The top has two pinhole stereo speakers, a hot shoe, shutter button and on/off key; there’s a tiny speaker here as well. When you slide off the hot shoe cover, you’ll see an accessory port on the back which connects whichever add-on you pick (supplied flash or optional viewfinder, close-up light, Bluetooth communicator and so on). As with all mirrorless cameras, the port/hot shoe is only good for one device at a time so if you have the flash in place, forget about using the viewfinder at the same time. Now you can see why one with a built-in flash–like the PEN E-P3–might make more sense but this depends on your shooting style and budget.

The rear of PEN Mini is also very clean, as it’s dominated by a 3-inch 460K pixel LCD screen. The display is quite good, handling direct sunlight with little difficulty. On the top right is a red-dot video button and below are Info, Controller, Menu and Playback keys. Info changes the number of icons on the screen and displays a histogram if you’d like. The four-way Controller with center OK button is surrounded by a rotary dial for moving through menus. The four points give direct access to flash, burst mode, focus type and exposure compensation. Unfortunately, there’s no quick access to ISO (12,800 maximum) or white balance but the PM1 is really targeted to a point-and-shoot photographer looking to spread his or her wings. Menu is a combination mode dial/set-up button. Press it and you access Art, iAuto, Scene, Movie, PASM and set-up. Once you highlight your choice, press OK then turn the dial for the setting you want. When you’re in Scene, for example, it even shows a thumbnail of the type of subject you’re shooting; there are 23 options. Olympus began the push for in-camera Art Filters and there are six here. What’s enjoyable is the fact you can get an idea what Pop Art will do for your girlfriend’s portrait on the screen—you may want to quickly switch to Soft Focus. We’re finding these to be fun add-ons especially Dramatic Tone which makes a nice blue sky filled with clouds look like the coming of Armageddon.

The right side has a small compartment for Olympus’ proprietary multi-connector and Type D HDMI out. Of course, we’d prefer the more common mini HDMI but this camera is small for a reason. On the bottom of the Made In China model is a metal tripod mount and compartment for SD Card and battery. The Mini also accepts Eye-Fi and speedy UHS-I rated SD media.

The PEN E-PM1 body, M.Zuiko MSC Digital ED m14-42mm f/3.5-5.6 zoom lens, USB/video multi cable, Lithium-Ion battery/charger, shoulder strap, Olympus ib software on CD-ROM as well an basic instruction manual. A nice touch is the bundled FL-LM1 flash which you attach to the accessory port. Of course you’ll need an SDHC/SDXC card rated Class 6 or higher. We did most of our shooting with Class 10 which are readily available for about $2 per gig. Stick at least 8GB in to tide you over for multiple shooting sessions.

We had the PEN Mini for several weeks including a trip to the U.S. Open in New York—talk about a good test for action photography. We also took it with us to California parks and Pennsylvania woods for the first taste of Fall foliage. When done we downloaded everything to the PC for pixel peeping and print making. We also reviewed the materials on a 50-inch plasma HDTV.

While at the U.S. Open, we got the chance to enter the “pits” used by sports photographers. It was kind of funny walking by these pros with 50-pound rigs with 400mm telephotos while we strolled by, PENs in hand. Needless to say, a Micro Four Thirds 40-150mm zoom (80-300mm equivalent) is a fraction of the size and weight—and quality too but we’re talking about taking everyday photos rather than the cover of Sports Illustrate. While at the Open we got the chance to use a variety of lenses including the f/3.5 fisheye. A shot taken of the sky with this lens and the Dramatic Tone filter delivered an over-the-top image but fun nonetheless.

We did a lot of shooting in various spots, capturing early rounds of the Open. Even though they weren’t shooting Nadal/Djokovik, trying to photograph speedy singles play is tough. And it was here we remembered the issues we had with earlier PENs. By default, it goes into Review mode so every time you fired a burst of 4 frames per second, the LCD would go dark and you had to wait. Then the light bulb went off and we realized we had the same problem with the 3 fps E-PL1. Once we turned Review off, the camera was much more responsive. It was also here we realized a built-in viewfinder is a good feature as you can hold the camera more steadily, pressed to your face. We used the optional VF-3 viewfinder ($179) and found the entire PEN experience to be much better. In case you hadn’t noticed, a nicely configured Mini is now hitting some Maxi price levels ($499 + $179 + $$$ for glass), meaning you’re now safely in D-SLR territory with their built-in flashes and viewfinders.

We’re being a bit unfair because most Mini purchasers will simply use it as a better point-and-shoot – and in this role, the E-PM1 is a winner. In everyday shooting—people pictures, scenery, short movie clips—the camera delivers high-quality images and solid videos. We did a lot of shooting in iAuto and found the Mini did a very good job. In most of those instances, the flash was attached and framing with the LCD was no problem whatsoever. Simply put we had a lot of fun using this little camera. Are there issues? Of course. The menu system is a bit awkward once you delve deeper in adjustments such as ISO. Instinctively we pressed Menu to get into the menu but when you’re in Program you have to press the OK button instead. It’s not difficult once you get the hang of it but it’s just weird. Also Olympus states the PM1 has a top ISO of 12,800; this is ridiculous number even on cameras with larger sensor but here it’s a world no one should enter. The camera worked well handling noise up to 1600/3200 and moved rapidly downhill. Still the fact we’re even saying you could use an ISO 3200 file—albeit even small—is a testament to just how far imaging technology has advanced in the past few years.

As for the videos, they were decent but we’re spoiled with phase detection 1080/60p versus the 1080/60i contrast detection used here. For short clips, the Mini is more than acceptable, however.

Olympus has done a fine job moving the bar in the mirrorless interchangeable lens camera category. We liked the first one we tested (E-PL1) shooting down in New Orleans and the E-PM1 performed well in very different locales–for the most part. We recently used several Sony mirrorless models, even taking similar shots with the PM1 and NEX-5N. With its larger sensor, the Sony outperformed the Olympus but you’ll definitely pay a lot more for it (around $200). So with those items on the table, we’ll recommend the E-PM1 for people considering a responsive, compact interchangeable lens camera that takes good pictures and videos. You really can’t ask for more than that. Actually we can but that’s a story for another day.