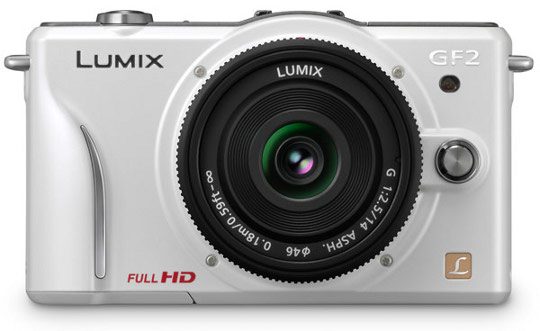 Panasonic has announced its newest DSLM (“M” for micro) camera, the 12-mega pixel GF2, and it promises to be both versatile and compact. Its’ predecessor, the GF1, was a hit with consumers and all things are pointing to similar results for its upgrade. It’s significantly smaller but still has its “signature built-in flash,” as Senior Product Manager Darin Pepple reports, and is compatible with Panasonic interchangeable lenses. He also claims the camera is “’future-proof,’” referencing its 3D capabilities. The 3D feature is fun, but there’s increasing skepticism about whether or not 3D is actually going to catch on with the everyday consumer.

Which is why it’s good Panasonic didn’t choose to market the entire camera around its 3D component. There are 17 shooting modes available, a feature most attractive to beginners who aren’t bothering with their own detachable lenses and filters yet. Fitting, as the concept behind Panasonic’s DSLM line is to offer the mind of a DSLR in the body of a point and shoot. Unlike a DSLR,  the GF2 does not have a view finder, instead delegating that task to the screen (you can attach one manually if need be).

It runs on the new Venus Engine FHD image processor, allowing it to use the higher ISO levels at no expense to your image quality; good news for photographers who find themselves in tricky lighting situations. And of course, the camera can also record HD audio and video.

The GF2 also includes a 3-inch touchscreen. One popular feature of the touchscreen is the ability to select individual faces for the camera to recognize before taking a shot. The touchscreen also has a host of other built in operations, like focusing, shutter release, and zooming in and out. The GF2 is undoubtedly easier than the GF1 for novice photographers to use, and the impressive ISO range (100 to 6400) is attractive to professionals – but the hardware seems to lean in simplicity’s favor, so advanced users might be somewhat disappointed by the lack of buttons and knobs, and the control the photographer sacrifices.

The GF2 is expected to  launch in January. There will also be two kit options available, the 14 mm F2.5 Lens Kit and the 14-42 mm zoom lens kit.  Pricing has not yet been released, but will be announced at the beginning of December at the latest.

Amazon discounts this point and shoot Panasonic Lumix camera by $100