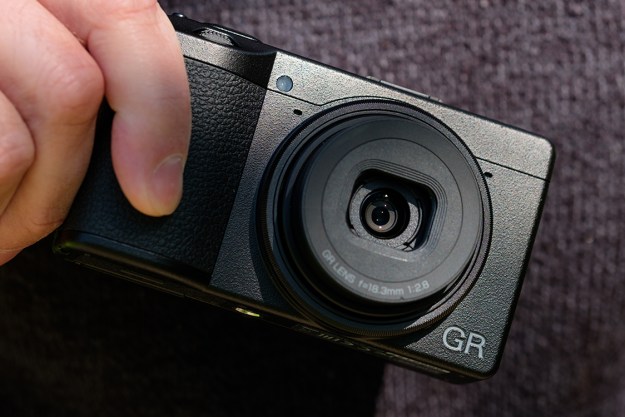 “The Ricoh GR III will make you rethink whether a smartphone camera is ‘good enough.’”

There’s an oddly familiar feeling to the Ricoh GR III, and it isn’t that it reminds me of the GR II — I never shot that camera. Rather, it reminds me of my phone. It has a 28mm equivalent lens, fixed LCD touchscreen, and no viewfinder, all features it shares with most smartphones. It’s nearly pocket sized, very lightweight, and easy to use with one hand. The shooting experience feel almost identical to shooting with a phone, with some of the same benefits and drawbacks.

What’s the point? That’s easy. The GR III gives you more control, and much better results.

Inside the GR III is a 24-megapixel APS-C sensor, the same size and resolution as you’ll find in the Sony A6400, a mirrorless interchangeable lens camera. Yet the GR III packs it, and an 18.3mm f/2.8 lens, into a body that’s hardly any bigger than the Sony RX100 VI, a point-and-shoot with a much smaller 1-inch-type sensor. What’s more, Ricoh managed to fit in a sensor-shift stabilization system — something the GR II lacked — which is good for 4 stops of shake reduction.

This makes for image quality that is remarkable in absolute terms and astonishing when you consider it’s coming from such a small camera.

But at $800, the GR III a niche product that won’t have broad appeal. Clearly, it can’t replace your phone, so it’s still a second thing that needs to be carried. It also doesn’t offer the added flexibility of a point-and-shoot with a zoom lens or a larger interchangeable lens camera.

While many people will see that as limiting, it’s also liberating. With less complexity, there’s less to worry about, and that keeps you tuned in to the scene rather than fussing with the camera. That’s what makes the GR III such a joy to shoot with.

F/8 and be there (just not for too long)

Like most small cameras, the GR III has limited space for controls. While Ricoh has found a way to fit two command dials, a three-action jog wheel, and ten buttons on the body, they are all rather small, which makes on-the-fly adjustments a bit difficult. I found the best way to work with this camera is to dial in your settings before you start shooting. Get a basic meter reading of the scene, lock in your exposure or set a desired exposure compensation, and then ignore everything except the shutter button while you actually shoot.

Working like this, the GR III almost becomes invisible. You feel much more present in the environment than you would hiding behind a big DSLR. Photographers have spoken of the barrier effect a camera can have between them and the subject, but that phenomenon doesn’t happen with the GR III.

It’s easy to see why street and travel photography are where this camera is designed to shine. The compact size — it measures just 4.3 x 2.4 x 1.3 inches and weighs 9 ounces — lets you take it anywhere, while the 28mm full-frame equivalent lens is a preferred focal length for documentary work or firing from the hip.

The only problem is the GR III’s paltry CIPA battery rating of just 200 exposures. With other cameras, you can push well beyond these conservative estimates in real world use, but after about 120 pictures, I was left with a single bar remaining in the battery indicator. A couple of spares are an absolute must (they’re about $40 a piece), but in a busy street environment, you may not stop to check battery life often, and this could lead to you missing shots.

On the plus side, the camera can both charge and be powered over USB-C. It’s not a bad idea to carry a USB battery brick in your bag and just plug the camera into it when not in use.

More capable than you realize

While the GR II was a very modest upgrade over the GR, the GR III is all new. Not only is the sensor a healthy 8MP higher in resolution, but the lens has been completely redesigned, with a macro mode capable of focusing as close as 6 centimeters (about 2.4 inches). The autofocus system is also new, using a combination of both phase and contrast detection. In good light, it’s pretty quick — but not nearly as fast as what we’ve seen on high-end mirrorless cameras.

Like previous GR models, the mark III has the optional Snap Focus mode, which focuses on a preset distance as soon as you turn the camera on. You can set this to whatever distance you desire, and it’s a good way to lock in the hyperfocal distance of a given aperture if you like to work that way. Snap Focus means there’s no autofocus delay, so the shutter activates as soon as you press the button.

The camera is very quiet (just remember to turn off the annoying autofocus beep). It uses a leaf shutter which barely makes any noise at all, though your shutter speed is limited by the aperture setting. Wide open at f/2.8, it can hit 1/2,500 second, but you’ll need to stop down to f/5.6 to reach the fastest speed of 1/4,000 second. That’s because the shutter has to travel a greater distance at wider apertures.

If you find yourself in a situation where you want f/2.8 but 1/2,500 just won’t cut it, don’t worry: There’s also a built-in 2-stop neutral density filter. You can toggle it within the menu, map it to a function button, or even put it in automatic mode. Like screwing an ND filter to the front of your lens, it’s also useful for long exposure photography, letting you push the shutter speed two stops slower to record more motion blur in your photos. It was enough to capture some dreamy waterfall images — you’ll still need a tripod, but thankfully you can get away with a very lightweight one.

The first time I loaded an image from the GR III onto my computer, I let out an audible “wow.” This sensor is right up there with the best APS-C sensors on the market, producing very clean and detailed images at the base ISO of 100, with decent noise levels up to ISO 6,400. You can push it further, but noise jumps up significantly at 12,800, and the color cast takes a sharp left toward magenta beyond that.

The camera shoots RAW images in the open Adobe DNG format, which means the files are compatible with just about everything. In truth, you may not be blown away by the out-of-camera JPEGs — if for no other reason than that camera phones have gotten so good at this thanks to computational photography — but the RAW files grant a level of postproduction flexibility you just don’t see in other cameras this small. You can tweak the colors, adjust the exposure, and recover detail from the shadows with ease.

But the real hero is the lens. It is unbelievably sharp, even wide open at f/2.8. How Ricoh managed to engineer optics so good while keeping to the physical constraints of the camera is beyond me. Paired with the lack of an antialiasing filter in front of the sensor, it produces some rather astonishing results. It’s so sharp, in fact, that it causes a few (minor) problems. You’ll notice moiré in hair and other very fine details.

Aware of this, Ricoh added an antialiasing filter simulation to fix it, a feature it borrows from Pentax (Ricoh owns Pentax). It works by using the sensor-shift stabilization system to vibrate the sensor to obscure fine detail, and thus blur away moiré. You can turn it on in the menu, with two different strengths to choose from. It offers the the best of both worlds for resolution and moiré control, and we’re not sure why other brands haven’t copied it.

You feel much more present in the environment than you would hiding behind a big DSLR.

If there’s one downside to the lens, it’s that it vignettes heavily — and not just at the widest aperture. Even at f/8, you’ll notice darker corners in your images. Personally, I rather like it. It adds character and creates a moodier look. Vignetting can be corrected optically, but it usually requires a very large front element — as you can see on the Sigma 105mm f/1.4 Art — and there simply isn’t room for that in the GR III. Fortunately, if you don’t like vignetting, it’s an easy problem to fix in post.

Looking for a video camera? Look elsewhere. The GR III tops out at 1080p/60 and it doesn’t look fantastic. Again, this is a niche camera, and Ricoh seems fine leaving video all but out of the equation.

The Ricoh GR III is a rare breed. It’s a simple camera for photographers used to working with complex ones, or an advanced camera for people who shoot with their phones. It is refreshing in its simplicity, empowering in its capability. It can’t zoom, shoot great video, or last for a full day of shooting, but it can deliver a unique photography experience with gorgeous results in a surprisingly broad range of situations.

That it fits in a jacket pocket is just the icing on the cake.

Not really. The Fujifilm XF10 is the closest competitor, and also uses a 24MP sensor and 28mm equivalent lens. But it is decidedly less advanced than the GR III, and other reviewers have pointed to its lackluster autofocus performance and operational speed (although it does cost less, at about $450).

Build quality is decent, but it’s certainly not at the level of a Pentax DSLR. Watch out for the ring that covers the accessory mount around the lens; it kept falling off during this review. Treat the camera carefully and it will last for a long time. It’s been nearly 5 years since the GR II was released, so the GR III won’t be replaced anytime soon.

Yes. It’s a niche camera, but the Ricoh GR III precisely fits the gap it aims to fill.