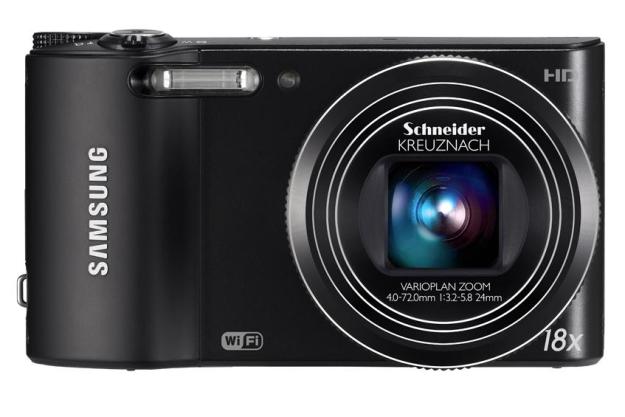 “If you aren’t looking at professional-level compact performance, but want a point-and-shoot – particularly one that’s hitting the connected ground running – then look no further.”

As digital cameras see their role taken over by smartphones and their quickly improving imaging abilities, there’s clearly a need to some innovation here. With the WB150F, Samsung is attempting to bring cameras up to consumers’ connected expectations, while still delivering (as much as possible) on the image quality front – and for $200, the price might be right.

The WB150F is a nice-looking device; it’s simultaneously smooth, solid feeling, and even has a passing resembles to a sophisticated compact system camera. The subtle front-facing grip looks sharp, but isn’t ideal for one-handed shooting. The lens has a faux dial, giving the impression you have manual control at the tips of your fingers, but it’s a bit of fake out. Still, it looks nice, and that counts for something.

The top of the chassis houses only three controls: The power button, the zoom toggle, and the main mode dial. The entire body has an almost aluminum-like matte finish to it, which we found a really nice deviation from the blindingly shiny looks many consumer-level cameras flaunt.

On the back of the WB150F, in addition to your 3-inch LCD, you’ll find a small thumb grip, dedicated-video button, menu, back, playback, and trash buttons, as well as a central dial hub for in-camera navigation. Aside from the back button, which we’ll get into later, it’s all pretty routine.

Maybe it’s the faux dial look of the lens, but you’d expect the WB150F to be heavier than it actually is. Despite the serious, compact-system look, it’s pretty lightweight and not overly covered with buttons and switches. It’s sort of a best-of-both-worlds approach – as long as it can deliver on the image quality and manual capabilities.

Overall, this is a beauty of a camera: Sleek, simple, matte, and with enough body-level controls to take it seriously.

Samsung’s WB150F comes packaged with an SLB-10A lithium-ion battery, wrist strap, AC adapter, and a 20-inch USB cable that terminates in a proprietary connector. Samsung Intelli-studio is also includes on a CD.

The WB150F is a new breed of digital camera, and Samsung deserves props for trying something new in the face of ample attacks on this market. It offers more traditional navigation when you exist with P/A/S/M settings, but pre-set mode interfaces have more of an app-look to them – which is a smart choice.

The back button plays an important role in making the WB150F more intuitive. This control is ubiquitous with mobile and desktop devices, but most digital cameras still rely on the menu control for this purpose (and a screen prompt that simply says “hit menu to go back”). Samsung leverages our newfound familiarity with smartphones by adding a back button to the camera, cutting out unnecessary text and any accidental confusion.

We’re also pleased to see Samsung’s Smart/AllShare UI spreading across multiple devices. The same interface you’ll find on the camera also shows up in the company’s connected TVs, smartphones, and tablets. Samsung might not have positioned itself as one of the big names in consumer level point-and-shoots, but it has managed to establish itself as a go-to for connected devices. Aligning those products with a central, identifiable hub is a really nice touch.

This isn’t to say that your traditional manual interface has been wiped out. When you’re using the P or A/S/M modes, you’ll use the menu and OK button to fuss with ISO, exposure, and shutter speed. The A/S/M modes use screen space a little differently, however, and you’re told to hit OK and then up or down to change settings. It’s a little unfamiliar, but doesn’t take much getting used to.

Without a doubt, the biggest selling point on the WB150F is its Wi-Fi integration, which is incredibly easy use. Connected cameras have become the next hot trend in point-and-shoot cameras, but we’ve yet to use too many that put the functions at users’ fingertips. It should be as easy to push photos from your camera as it is to push them from a smartphone.

It’s not quite that easy, but Samsung does a good job trying to get it there. The Wi-Fi option has its own dedicated setting on the main mode dial. From here, you have a screen with choices on where you want to push photos: social sites, email, back them up to your desktop, your SkyDrive account, share to your Samsung Smart TV via AllShare, or link the camera to your smartphone (which requires an app download) and turn the phone into a remote shutter.

The process of entering a Wi-Fi password and then respective account information is undeniably painful, and something that a touchscreen would probably help. But you’ll survive… button after button hit, letter after letter entered, you’ll survive.

From there, things get easier. You can auto-push whatever you want to Facebook, Photobucket, YouTube, and other sites. Putting this access front and center is a huge draw for the WB150F. We only expect this sort of feature to keep on improving, too.

Wi-Fi may be this camera’s most prominent feature, but it isn’t the only thing the WB150F has to brag about. It offers a slew of in-camera filters and options like Pandora, split shot, Magic Frame, and an editor. Filters and pre-sets are almost an expectation in point-and-shoots these days, but the addition of Magic Frame and split shot deserve mention. Split shot lets you shoot several photos and essentially composite them next to each other on the camera, saving what would usually require editing later. Magic Frame takes it a step further and lets you inset one shot on top of another, like putting on friend’s face on another’s body.

As far as hard specs go, the WB150F also has an 18x optical zoom (24x digital), HD movie recording at 720p resolution with video capture at 30 fps. You also get the previously mentioned full manual control, and a 14 megapixel 1/2.3-inch CCD sensor – which has its own pros and cons that we’ll talk about next.

While the WB150F feels great in your hands and is undeniably easy to use and adjust settings with, image quality takes a bit of a hit. That’s when comparing it to other point-and-shoots in the same price bracket, as well as taking all of the camera’s features into consideration. There’s a lot going on in this camera, and it might distract from arguably the most important basic: How your pictures look.

The camera uses what can be considered a decent yet average sensor, and the images show for it. When you take your time setting up shots using the manual modes, you can get some pretty good shots, but if you’re used to what you can get out of compacts from Nikon and Canon, you’ll be a disappointed in these results.

There’s certainly a “good enough” factor to think about here: With everything else the WB150F can do, its convenience and versatility, the actual quality of the photos might not bother you. They’re not beyond help, but in a few areas, you can see it falls short.

Exposure, for one, could be handled better. It’s far too easy to have a blown-out background, and low light in general was a challenge. Color and saturation actually came out nicely, and hues weren’t overly warm or bright, with a few exceptions, but no deal breakers.

Video also falls under the “decent at best” bracket. It’s grainy, and the Jello effect is undeniable. Don’t expect much in the way of smoother zooming – but it’s adequate, Users can shoot HD at 1280 x 720, VGA at 640 x 480, or QVGA at 320 x 420 at 15 or 30 fps. Nothing terribly outstanding here, but again, you can check off HD video capabilities on this camera’s feature list.

Overall, the WB150F is a surprisingly great option. When a camera has this many flashy features up front – Wi-Fi, editing, filters, manual settings – and doesn’t come with the most dependable name in point-and-shoots attached, it’s good to be a bit cautious. Even though the image quality is not the best we’ve seen for this price, the convenience factor, good looks and stable body do an admirable job making up for this caveat. It’s not often that a camera will get such a good recommendation from us, but at the newly discounted price of $200, there’s too much packed in here to ignore. So if you aren’t looking at professional-level compact performance, but want a point-and-shoot – particularly one that’s hitting the connected ground running – then look no further.

Looking for a point-and-shoot that’s big on features, fun, and connectivity? Anyone addicted to the convenience of smartphone cameras but not the image quality will want to check out the WB150F.

Best GoPro deals: Sales you can shop today
GoPro Hero 11 Black leak suggests a moderate upgrade
Best camera deals for September 2022
Astronaut reveals source of ‘intriguing’ bright light on Earth
How to clean up and organize your photos
This MagSafe iPhone rig aims to give your videos a more pro look
The best selfie apps for iOS and Android
Nikon’s new 800mm lens for Z-mount cameras lightens the load
ReelSteady makes GoPro Player ‘reel’ useful for filmmakers
GoPro takes to the skies with the Hero10 Black Bones
How to turn off the camera sound on an iPhone
24 amazing images of our planet for Earth Day
Instagram test lets you pin particular posts to your profile