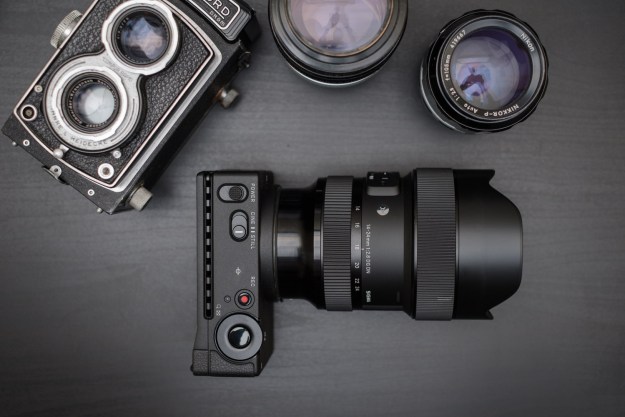 “Smaller, lighter, and every bit as good, Sigma's second take at a fast ultra-wide is a winner.”

When I reviewed the first Sigma 14-24mm F2.8 Art lens, I noted it that it was just the second such lens to be made following Nikon’s 2007 model (although I neglected to mention the the Tamron 15-30mm f/2.8, which is similar enough). That Sigma was, and is, one of the best wide-angle zooms you can buy. So if it ain’t broke, what do you do?

Less than two years have passed since I shot the 14-24mm F2.8 DG Art, and already Sigma has come out with a new one, this time with “DN” added to the name. That stands for mirrorless only.

Unlike the brilliant-but-unwieldy Sigma 35mm F1.2 DN Art, the 14-24mm DN feels like it was built for mirrorless cameras. This is no mere rehousing of the original lens; it’s a complete rethinking of it. It shaves off almost a pound in weight, yet uses more glass elements, more iris blades, the same f/2.8 constant aperture, and is still weather-sealed.

Whatever witchcraft went into this design, it wasn’t that expensive. At $1,399, the DN version is only $100 more than the launch price of original. This is the new fast ultra-wide to beat, but there’s one caveat. If you don’t own an E-Mount or L-mount camera, you’re out of luck.

This is also the first time E-mount and L-mount photographers can use a 14-24mm without an adapter. The non-DN version, unlike some other Sigma DSLR lenses, was never released in a native mirrorless mount.

How did Sigma build this?

But the Sigma 14-24mm F2.8 DN Art? 1.75 pounds. It is also narrower and shorter than the others, making it more comfortable in the hand. It still felt front heavy mounted to the miniature Sigma Fp, my test camera for this review, but it seems the perfect size for the larger Sony A7 or Panasonic Lumix S series.

You still have to contend with a bulbous front element, which means no screw-on filters, but a sheet-filter holder is built in to the rear of the lens.

The optical design is new, employing 18 elements in 13 groups, compared to 17 elements and 11 groups in the original 14-24mm Art. A number of low-dispersion glass elements and three aspherical elements work to ensure minimal chromatic aberration and flaring, and Sigma says the new lens was engineered to be less susceptible to problems arising from strong backlighting.

It also uses an 11-blade aperture diaphragm, up from nine in the older lens.

But Sigma’s new design seems to be about bringing equal performance to a smaller form factor, rather than offering a revolutionary jump in image quality. Given how good the first 14-24mm already was, that’s not a bad thing.

As for performance, Sigma touts the speed and silence of its autofocus stepping motor, but the contrast-detection autofocus of the Fp isn’t the best test of that. On a Sony or Panasonic camera, AF will likely be quicker.

Without testing them side-by-side, I can’t say if the 14-24mm F2.8 DN outclasses the original. As far as I can tell, both lenses perform at the the top of their class, and there are no obvious optical drawbacks to the DN’s smaller size. That’s impressive.

Distortion is present, but not to unacceptable levels, and is easily corrected. It’s a similar story with vignetting, with f/2.8 showing noticeably darker corners compared to the center at both 14 and 24mm, but it’s nothing out of the ordinary. Vignetting subsides as the aperture is stopped down, and even f/4 makes a big difference.

Sharpness is excellent across the frame, with only minor chromatic aberration showing up near the edges. If sharpness falls off from the center, I wasn’t able to detect it in any real-world setting, although I can’t say whether that would remain true on higher-resolution sensors.

The move to 11 aperture blades is interesting, as ultra-wide lenses aren’t known for their bokeh. It’s possible to get a shallow depth of field with this lens if your subject is close enough, but I’d have to do more testing to determine if the aperture shape is making much of a difference compared to the original 14-24mm.

I will say, background blur is different between the two lenses for other reasons. The non-DN version exhibited a lot of “stretching” of de-focused areas, an effect that didn’t come up in my testing of the new lens. This is a subjective difference, and I don’t think either is bad, but it’s safe to say the DN lens is more natural.

To achieve this kind of quality from a lens that is smaller, lighter, and almost the same price as the original is an awesome achievement. But, if you’ve shot the first Sigma 14-24mm, don’t expect to be blown away with big gains to image quality.

The 14-24mm F2.8 DG DN Art is a rare example of a Sigma lens that offers improved, or at least equal, performance and improved practicality. Where other Sigma Art lenses, even mirrorless-specific models like the massive 35mm F1.2 Art, bulked up to hit their image quality goals, the 14-24mm DN did the opposite.

That it’s still (relatively) affordable makes it all the better.

It remains a niche lens that not everyone will have a use for, with a somewhat limiting 2X zoom power, but there isn’t a better value in wide-angle, f/2.8 zooms for mirrorless cameras.

No, but this lens is far less adaptable than the DSLR version. It is available only in L or E-mount configurations. Canon and Nikon users will have to stick with the older, non-DN model. Built for DSLRs, that lens can also be adapted to Canon’s and Nikon’s mirrorless cameras.

The Tamron 15-30mm f/2.8 G2 is another option for such photographers, although one we haven’t tested.

You’ll want to keep that front element protected when not in use, but the lens will easily last through several camera generations if treated properly.

Yes. This is the best value in fast, ultra-wide zooms for E-mount and L-mount cameras.

Smaller and cheaper, the full-frame Lumix S5 is exactly what Panasonic needed