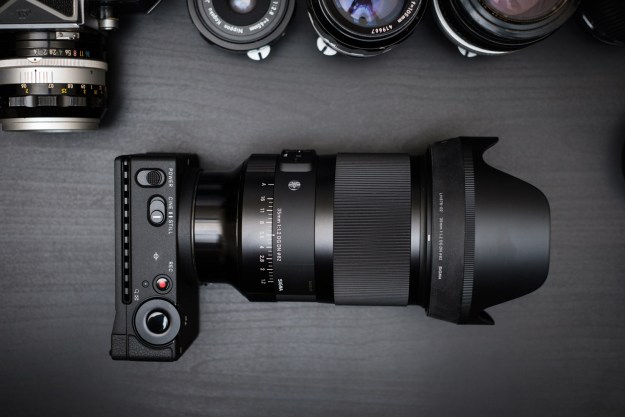 “The Cybertruck of lenses, you'll buy it just to show off to your friends.”

The Sigma 35mm F1.2 DG DN Art is exceptional. I doubt you will find a better full-frame 35mm. It’s so spectacular, it raises a question I’ve asked of a few similar lenses in the past.

Does it need to be this good?

The lens is a technical marvel and one of the sharpest I’ve seen, with beautiful bokeh and effectively no distortion. However, thanks to its bulk, it is also the most inconvenient 35mm I have used.

Sigma is no stranger to delivering the best quality at any cost. I’ve groaned about the size and weight of almost every Art lens I’ve reviewed, and they’ve all been optically excellent. But where other Art lenses were built for DSLRs, this one is part of Sigma’s new DN lineup, made for (usually) smaller mirrorless cameras.

Sigma is flexing. It knows it has the best lens, and at $1,500, it undercuts the older and slower 35mm f/1.4 lenses from other major manufacturers. It doesn’t matter that it’s heavy enough to anchor a small ship. People will buy it just to show off.

Get ready for a bag upgrade

At 5.5 inches long and a diameter of 3.5 inches, the 35mm F1.2 would be huge on any camera. Mounted to the diminutive Sigma Fp I had, it’s laughable. This is the only 35mm I’ve shot that I felt should have its own tripod collar. If you plan on replacing an existing 35mm with it, you might need a bigger camera bag.

There are, of course, good reasons for that size, starting with the f/1.2 aperture. Full-frame f/1.2s are relatively rare, and this combination of bright aperture and large sensor can give you a shallow depth of field that simply isn’t possible on smaller formats. But, it also isn’t that different from the readily available f/1.4 lenses out there.

Also contributing to that weight is the elaborate optical formula. There are 17 elements in 12 groups, including three aspherical elements. It’s a lot of glass, an additional four elements over the 35mm F1.4 Art.

Like all Art lenses, that glass is housed in a sturdy, dust- and splash-proof exterior. It feels incredibly well made. In addition to the usual auto/manual focus switch, the lens barrel has a focus lock button and aperture de-click switch. The latter is mostly aimed at videographers who need to be able to smoothly ramp exposure up or down without noticeable steps. Given how many people shoot both stills and video these days, it’s a feature I wish every new lens had.

Further evidence of the lens’s hybrid nature are the 11 iris blades, a higher count than most still photo lenses, but par for the course for cinema. Those extra blades mean the aperture stays nearly perfectly circular when stopped down, leading to rounder, more natural blur.

This is a mirrorless-only lens, available in either L mount or Sony E mount. Canon and Nikon shooters have long been Sigma’s bread and butter, but they appear to be left in the cold here. Not only is it physically impossible to make this lens work on a DSLR’s longer flange-back distance, but Sigma has shown no interest in making RF or Z-mount versions for Canon’s and Nikon’s mirrorless systems, respectively.

It doesn’t get sharper than this

The maximum resolution of an imaging system is a factor of three things. Sensor, lens, and technique. Sigma says the 35mm F1.2 can resolve “over 50 million pixels,” which suggests it is targeting cameras like the 47-megapixel Panasonic Lumix S1R and 61MP Sony A7R IV, the two highest-resolution cameras in L mount and E mount, respectively.

Mine was mounted to the 24MP Sigma Fp. And all I can say is, wow. It’s insanely sharp. Three aspherical elements mean chromatic aberration just isn’t there, although higher pixel counts could potentially reveal some. I know, rationally, that I don’t need a 61MP camera. Yet I still want to see what this can do on an A7R IV with a sturdy tripod.

Wide open, real-world sharpness is excellent, although it still improves as you stop down. Peak sharpness arrives by f/2.8, but there’s little real-world difference between that and f/1.2. That’s impressive.

Maximizing sharpness comes down to technique. This is a difficult lens to hold due to the weight, so a fast shutter speed will be the difference between excellence and mediocrity. And while the temptation to shoot at f/1.2 is hard to resist, you’ll see more sharpness if you stop down, even just to f/2, thanks to the extra depth of field.

Sharpness isn’t everything, however. With excellent optics and the 11-bladed iris, you get some of the softest and most pleasant bokeh I’ve ever seen, certainly for a wide-angle. You can control the shape of the bokeh using the aperture, with f/1.2 giving a dreamy, swirly look, while f/2 yields a flatter, less distracting, pattern.

I do have a complaint. Wide open, vignetting is bad. It’s not necessarily an unattractive look, especially for portraiture, but it does mean light transmission isn’t that great at f/1.2. If you you were looking to eke out all possible low light performance, you might be disappointed. Only the very center of the image benefits from increased brightness.

Even a 1/3-stop adjustment to f/1.4 helps clear up the vignette, but it does leave me wondering if we really need f/1.2 to begin with. The depth of field difference simply isn’t noticeable, and if transmission isn’t that much better, what’s the point?

But if using that much glass and starting at f/1.2 is what was required to get perfection at f/2 and beyond, then so be it. You still won’t find a better 35mm.

I can’t fault a lens for being too good, but the Sigma 35mm F1.2 Art is the Tesla Cybertruck of lenses. It has all the performance you could want, but it’s really about bragging rights. An f/1.2 aperture isn’t something anyone needs. It’s a label that makes you feel special.

Still, this is the result of Sigma doing everything it could to make the best possible lens. And it succeeded. It won’t be for everyone, and that’s OK. If you want the best at any cost, or you just want to show off, it’s definitely for you.

No. However, if you don’t shoot an L-mount or E-mount camera, then the Sigma 35mm F1.4 DG Art or Tamron 35mm f/1.4 Di are good alternatives. These are available in Canon EF or Nikon F mount, which can then be adapted to Canon’s and Nikon’s mirrorless systems.

Built to resolve the highest-resolution sensors, you should get years of use out of it. Like any good lens, it will outlast the life of your camera.

Yes, if you own an L-mount or E-mount camera and want the best 35mm money can buy.

Topics
Lens teardown reveals how Canon made an affordable super-telephoto
The Nikon Z 5 doubles down on SD card slots despite its entry-level price
Sony’s new ultra-wide full-frame lens is the first of its kind
RAW power: Fujifilm brings RAW video to medium-format GFX 100 — and a new lens
How to remove the background from an image
Instagram boss says to expect even more video content
6 awesome Earth images captured from the ISS in July
This GoPro Hero 10 bundle is $100 off at Best Buy today
The best iPhone tripods for 2022
Watch this Mavic 3 drone soar above the world’s highest mountain
How to watch DJI unveil an all-new drone today
DJI Avata vs. DJI FPV: Which first-person drone is best for you?
Astronaut reveals source of ‘intriguing’ bright light on Earth