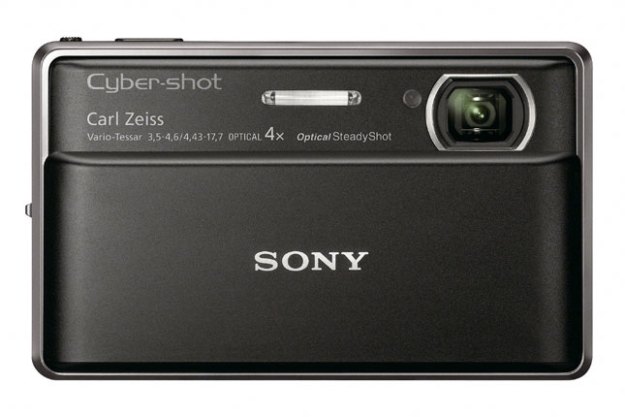 “The Sony Cyber-shot DSC-TX100V is a very good camera packed with features, but be prepared to deal with a washed-out screen in the sun.”

The latest 2011 digicams continue to ramp up still and video quality. Have we finally topped out? Sony tries to break through the glass pixel ceiling with the Cyber-shot TX100V, the latest spin on its stylish TX series.

The Sony T and TX series have been around so long they’re iconic. With a thin body, sliding front cover, non-protruding 4x zoom lens and minimal controls, we’ve always liked the industrial design. Not much has changed in overall styling with the new TX100V, but there have been some huge changes in screen and capture technology.

Available in red, silver and black, the camera measures 3.9 x 2.4 x 0.72 (W x H x D in inches), tipping the scales at 5.2 ounces with battery and card. Needless to say for a camera smaller than a Droid smartphone, you can carry it anywhere. Our ruby red review sample looked very chic. Looking head on there are just two tasteful logos on view in the off position. Slide the front panel down to power it up and there’s additional text, but it’s so subtle as to be barely noticeable. Other manufacturers please take notice. You’ll also see the flash, AF Assist/self-timer lamp and non-protruding Carl Zeiss Vario-Tessar 4x lens with a range of 25-100mm. Clearly it’s not the most powerful telephoto out there, but it does have a nice opening wide angle, which we prefer compared to 30mm or even 28mm.

On the top are the four-pinhole stereo mics, a tiny power button, shutter and small zoom toggle. Do your own hands-on with camera, as you may find the controls to be too small. We didn’t have a problem, but that’s just us. The speaker is a small slit at the beveled back edge, and there’s a playback button nearby. That’s it folks. Since this is a touchscreen, there’s a minimal amount of buttons, dials and controls — everything is handled by the touch interface. This can be annoying, as we found with the Panasonic FH27, but it can be a good experience as we had with the new Canon ELPH 500 HS. Stay tuned for our verdict in the performance section.

The 3.5-inch touch screen takes up the entire back of the camera. As part of a slightly growing trend — at least in cameras — the display uses Organic Light Emitting Diode (OLED) technology and it’s rated 1,229K dots, about as good as it gets. OLED displays are known for their outstanding black levels, contrast and accurate color reproduction. But like the little girl with the curl in the Longfellow poem, when they’re good, they’re very, very good but when bad, they’re horrid — as you’ll discover.

On the right side is the eyelet for the wrist strap and compartment for the mini HDMI out. The left just has a GPS logo while the bottom of the made-in-Japan camera has Sony’s proprietary USB-A/V connector, a metal tripod mount and compartment for the battery and memory card. The TX100V not only accepts all Memory Stick Pro Duo media types but SD (including SDXC) as well.

The package for the TX100V camera, battery, USB charger, USB cable, strap, paint pen (stylus), a 28-page quick guide and CD-ROM. Thanks to the lower power requirements of the OLED screen, the battery is rated 220 shots, a good figure for a 3.5-inch display; our results were better than that. As part of a trend we’re not fond of, the camera does not come with a plug-in charger. You have to juice it up by connecting it to the USB-to-AC adaptor or via USB to your computer. It’s not the end of the world, but just get into the habit of charging your camera at night, like your cell. The CD-ROM has Picture Motion Browser ver. 5.5 for handling files, plus it also has the full manual as an HTML file.

We had the TX100V with us over the course of several weeks, using it in the New York metro area as well as in Florida where we tested the camera along with several others including the 12MP Nikon Coolpix S9100. The ability to slip this tiny digicam in your back pocket and carry it everywhere is one its real pluses. It powers up quickly and you’re good to go it what seems like an instant (actually it’s about 3 seconds).

The camera features a new 16.2-megapixel Exmor R CMOS sensor, capturing 4608 x 3456 pixel files. This spec is the absolute peak for 2011 digicams (not DSLRs) jumping over the 14.1-megapixel level that reigned supreme for a number of years. As Digital Trends readers well know, having a huge number of pixels doesn’t guarantee superior-quality photographs. How this one shakes out, you’ll know shortly. Another mind-boggling spec for the TX100V is its video capability. Last year it was fairly common for point-and-shoots to grab 720p HD movies (1280 x 720 at 30 FPS). This new Sony takes 1920 x 1080/60p movies in the AVCHD format at a 28 Mbps compression rate. Few fully-featured camcorders have this capability. These 60p clips are amazing, but we’re getting a bit ahead of ourselves. Let’s see if the pictures are any good, as after all, this is a digital camera!

The Cyber-shot TX100V is distinctly a point-and-shoot with no options for adjusting aperture, shutter speed or focus other than changing scene modes. Since there’s no mode dial, you adjust the camera using the touchscreen. The screen itself is very responsive, reacting quickly to taps of your fingertips. The icons are large and attractive. Your recording mode choices include Intelligent Auto, Superior Auto, iSweep Panorama, Movie, Program Auto, Background Defocus, Scene and 3D Shooting (still and Sweep Panorama). Intelligent Auto is like Smart Auto found on so many better aim-and-forget cameras. It “guesses” what’s in front of it, adjusting accordingly. Superior Auto takes advantage of the high-speed CMOS sensor, combining multiple frames for best quality. This slows the camera down a bit, but the results are worth it. iSweep Panorama is a great way to take horizontal or vertical panoramas; the TX100V stitches frames together in-camera. Movie lets you shoot anything from MPEG4 web clips to four grades of AVCHD, ranging from 9 to 28 Mbps. In program you have some image control, but it’s only exposure compensation, white balance and ISO (125 to 3200) which is typical for a point-and-shoot. What’s not typical is the burst mode, which hits 10 frames per second for a maximum of 10 shots. Scene has 15 options, and among our favorites are Backlight Correction HDR and Handheld Twilight. Again the speedy sensor combines multiple frames for higher-quality shots. And 3D lets you take stills and panoramas. Since the stills are MPO files, they can be viewed on any 3D HDTV, but the panoramas can only been seen on Sony 3D televisions.

We left Background Defocus for last, as this the one is an homage to advanced photography. Since you cannot change the aperture of the TX100V, the sensor combines two frames—one with the main subject and the background blurred. Voila! You’ve changed the depth-of-field without adjusting the lens. And did we mention this digicam has a built-in GPS that captures your longitude and latitude, plus a small icon that acts like a compass? Combine all of these features and you have one packed camera for under $400. Granted it’s not as photographically blessed as a Canon PowerShot S95 or G12, but those cameras are really targeted to very different shutterbugs.

Once we took all of our stills and videos, they were downloaded to a PC, 8.5 x 11 prints made, files examined closely on the monitor, and everything reviewed on a 55-inch Bravia 3D HDTV.

And the envelope, please

Before getting into details, we’ll say the Cyber-shot TX100V is a fun camera to shoot and — for the most part — we’ll be sad sending it back to the company (you don’t think we get to keep all these toys, do you?). The camera is responsive, focuses quickly and the touchscreen interface is well implemented.

Our photo results were somewhat mixed. Colors were accurate and had pop, but they weren’t as good as a 12-megapixel CMOS Canon PowerShot 500 HS. Overall, shots taken in Florida and NYC were quite good, and you’ll be happy with them, although were occasional hot spots on a blooming bush with white flowers. Backlight HDR and 10 FPS bursts are two of our favorite features of this digicam. HDR handles difficult exposures well and the continuous shooting really nabs fast action. Background Defocus, on the other hand, was just a mere shadow of what real camera can do, and the effects were minimal. We had a great time blowing up the files on our monitor, closely examining the minute details the TX100V captures. Just realize there are some tradeoffs cramming 16-megapixels onto a tiny chip, as it’s not a recipe for beautiful, noise-free prints. Sony seems to employ excess noise reduction, and this was noticeable with blow-ups past 100 percent, but our 8.5 x 11 prints were just fine. Are we being picky? Yes, but that’s the nature of the beast. As far as ISO is concerned, with our usual test subject, noise was well under control until around the 800 setting, with 1600 and 3200 degrading pretty rapidly. Stick to Handheld Twilight for best results in low light. It slows the camera down but it’s definitely worth it.

The TX100V takes 3D stills and Sweep Panoramas. To be honest, we’re still experimenting as to what makes a good 3D image, so our results were decidedly hit and miss. Palm trees with an ocean background worked well as stills, yet relative close-ups of flowering bushes did not. Some Sweeps were spectacular, others just flat. We’re still climbing the learning curve, but these are nice features with which to experiment. It also gives you another use for your 3D television other than sitting through Avatar again.

Along with 16-megapixel stills, the TX100V shoots 1080/60p video. The quality of these clips is top notch, with very accurate colors and no motion artifacts. The 28 Mbps compression rate is something you’ll find in full-featured camcorders such as Panasonic’s TM900 and SDT750, which cost over $1,000. It’s pretty amazing to find it in a sub-$400 camera. For the record, other Sony Cyber-shots offer this as well, and it’s a real standout. However, realize you can only watch the videos on TV at this quality level; there’s no way to record it. You have to step down to 60i to archive on Blu-ray disks. The clips look great. As usual, the stereo mics are bad at handling breezes, no matter if they’re slight or stiff. This is just a fact of life for camera microphones.

Solid-quality stills for the most part, superior videos (beyond the wind-tunnel noise from the stereo mics), a nice touch interface, 3D capability, built-in GPS and a big, beautiful screen—the TX100V seems like a winner. And it is — except for that 3.5-inch OLED display. We’d easily give this camera an Editor’s Choice award other than the fact the screen was almost unusable in the bright Florida sunshine. Granted, this is a tough test, but it didn’t hold up as we were walking on a pier around noon, and this was the case even with panel brightness cranked all the way to maximum. In other less severe instances, the screen still wiped out, and we had to bring it in close, using our body as a shade. This was a real disappointment for what could have been an outstanding digicam. Right now, it’s just very good but be prepared for those screen issues.