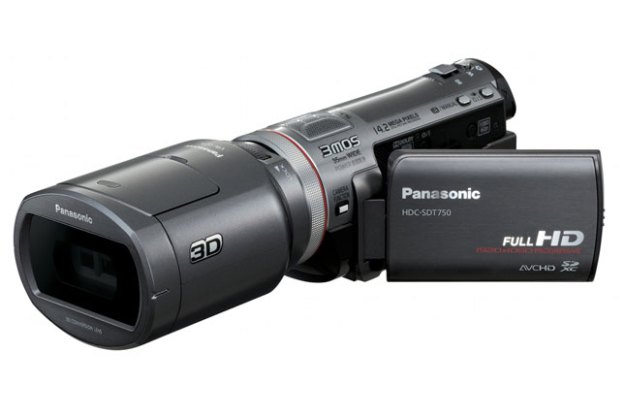 “Panasonic's HDC-SDT750 HD adds a 3D lens to a solid 2D Full HD camcorder. While it was a worthwhile experiment, unfortunately the overall results are far from stellar—especially in 3D.”

Can’t find a good 3D movie to watch on your new 3D HDTV? Make your own—or so say the good folks at Panasonic, Sony and other camcorder makers. The third dimension has hit home video in a major way in 2011 and whether this is a good thing, we’ll soon let you know.

There’s no getting away from it: the Panasonic SDT750 is very strange-looking. Unlike all consumer camcorders which fit neatly in your hand, this baby is rather gangly. Actually it looks like something used by a movie assassin to off his victim. The reason? The SDT750 does not have its 3D technology built into the body like the soon-to-arrive $1,500 Sony HDR-TD10 3D camcorder. This Handycam—which we briefly played with at CES—has two lenses, two imaging sensors and a pair of processors to record 3D 1920 x 1080 Full HD video. It also has a 3.5-inch monitor so you can check out your creations without glasses. By comparison, the Panasonic uses a separate 3D lens (VW-CLT1) that gets attached to the camcorder body, nearly doubling the length. There’s no question you’ll stand out in a crowd with this one. We can’t imagine how TSA security people will react when they see this baby! And unlike January Jones, this one won’t win any beauty contests with its 3D, 3MOS, FullHD logos and icons plastered all over it. Also annoying is the battery warning text which faces outward. Not to go on a rant, but would Apple release anything like this? Isn’t someone at Panasonic looking at a product when it’s complete, who takes a step back and says “hey, let’s move the legalese so it’s not staring our customers in the face?” In an era of iPads and smartphones, this is really not acceptable. As we’ve noted before, Panasonic is better known for its engineering than style and the SDT750 has several very cool technologies beyond 3D that we’ll get into shortly. Let’s continue our exterior tour…

Without the 3D conversion lens, the camcorder has a 12x Leica Dicomar zoom. As part of a new trend we like very much, it has a much wider opening focal length of 35mm in video, 38.8mm in still mode. The 35-420mm range is a good one and more than enough for all-around use. Also on the front are a flash and an AF Assist lamp.

Since it has a 3-inch touchscreen LCD on the left side, there are a minimal amount of buttons (thank goodness). On top is the wide/tele zoom toggle along with a shutter button for shooting stills. Also here is a 5.1-channel surround mic – a real plus for anyone with a home theater audio system. On the right side are an adjustable strap, a mode dial (camera, video, playback) and a compartment for the shoe adaptor for optional lights. On the left side are buttons to switch between Intelligent Auto/Manual, to vary the type of optical image stabilization and Camera Function to also get into manual.

Open the LCD (rated a should-be-better 230K pixels), you’ll find the on/off button and another to get you into 1080/60p (rather than i) recording. More on this in a bit. The lower bezel of the LCD has a number of controls including record, W/T for the zoom, Quick Menu, Menu and Delete. The menu system is straight forward and there’s no need for the supplied stylus as tapping fingertips on the screen work just fine. On the body is a speaker and compartment for the optional SD card and mini HDMI, USB and A/V multi connector outs.

The back is home to a clunky-looking battery with that annoying text, a pull-out EVF with diopter adjustment and a classic record button that rests under your thumb. The battery lasts only an hour so a spare would make a lot of sense if you were to buy this camcorder.

What’s In the Box

We have to give Panasonic credit here—the only thing missing is a Class 6 or greater SDHC/SDXC card. You get the battery, adaptor, remote, plethora of cables including mini HDMI, a stylus pen for the touch screen, a shoe adaptor and a 176-page owner’s manual. The 3D conversion lens has its own carrying case and caps. The software CD-ROM has HD Writer AE 2.6T software for editing and burning discs.

The Panasonic HDC-SDT750 uses a 3MOS imaging system so it has a trio of 2.53MP (effective) sensors (7.59 megapixels total) each handling red, green and blue colors in the spectrum. The system is fine for 2D Full HD AVCHD video and JPEGs but things get weird when you attach that 3D lens—which was the first thing we did. The camcorder uses the side-by-side method “to artificially reproduce visual disparity,” the added depth of 3D. Resolution drops to 960 x 1080 and it has a 4:3 aspect ratio, not 16:9 widescreen. By comparison, the Sony TD10 (due April) captures 1920 x 1080 16:9 3D footage. Of course, we’re browbeating Sony to get our hands on a production model to test it.

Attaching the 3D lens is a breeze but using it is another story. Every time you turn on the camcorder with it in place, the menu system recommends you perform a 3D conversion lens adjustment. This requires putting on the cap and using three dials atop the lens to adjust various guide lines and focus levels. It’s annoying but not the end of the world. What’s really bad is the fact the lens practically cripples the camcorder. How’s this? The zoom doesn’t work and neither does Intelligent Auto, manual operation as well as over 20 other menu options. Cool, huh?

We could deal with that if the 3D was worth it but we were sorely disappointed. After shooting a variety of scenes, we slipped the SD card into a 50-inch Panasonic Viera TC-P50GT25 3D HDTV review sample. Donning our glasses, we settled in to review our feeble attempts re-creating “Avatar.” Alas “House of Wax” was more like it. The 3D effects—or visual disparity—were decent, nothing more. Granted we didn’t have cars or super heroes jumping out of the screen as we shot normal scenes. Yes, there was some depth, but certainly not enough to justify the hefty price compared to a 2D Full HD camcorder. But let’s be realistic: There are two lenses in the add-on with a half-inch separating them, hardly the 3 inches of typical human eyes. Even the FujiFilm W3 with that amount of lens separation couldn’t pull off really deep, immersive effects. On the plus side, colors were good and noise was well under control, even indoors with available light.

After removing the 3D lens, we gave the SDT750 a 2D workout capturing videos and stills. With the attachment gone, the camcorder felt much more comfortable. We shot in iA (Intelligent Auto) then used the many manual options. Video quality was HA, Panasonic’s best 1080i setting, recording at 17 Mbps, not the 24 of many lower-priced AVCHD camcorders. We also shot in the 1080/60p setting which uses 28 Mbps compression. Once done, we reviewed the clips on the Panasonic HDTV, checked out the stills on a monitor and made full-bleed 8×10 prints.

We were quite impressed with the overall quality of the 2D 1080i video. Colors were spot on, detail was good and there was a minimal amount of noise. The 35mm wide-angle setting is a real plus, adding a nice new level of creativity to your videos. On the down side: we shot some scenes at a snow-covered beach and even with wind noise reduction enabled, it sounded like we were standing behind a 747.

Along with 1080i footage, we grabbed some 1080/60p scenes but before we could review them, we had to deal with a curveball. Seems the TV’s card reader couldn’t recognize the file so we had to put it back in the camcorder and connect via mini HDMI. This is odd since both the camcorder and TV are the Panasonic brand. This minor inconvenience was well worth it—colors were richer with barely any hints of noise. If you’re planning to shoot one-of-a-kind events, this is the setting for you.

We tried the 14.2MP interpolated still setting for chuckles, knowing the results would be soft and noisy. The results met our low expectations—don’t use it. Things were much better at the 8.6-megapixel option which is close to native resolution. The 8×10 prints were more than passable but lots of light is vital otherwise you’ll suffer from digital noise and flat colors. Reviewing the images on the HDTV were more impressive, thanks to the illumination of the set. Focusing was spot on and the images had plenty of detail—the prints just didn’t pop like those from a good Canon PowerShot.

Nothing ventured, nothing gained. In this case, adding a 3D lens to a solid 2D Full HD camcorder was a worthwhile experiment but unfortunately, the overall results are far from stellar—especially in 3D. And since this costs $1,100 at legit online dealers, it’s hard to recommend versus the many high-quality 2D AVCHD models from Canon and Sony. Note: Panasonic will introduce several new 2D Full HD camcorders in the weeks ahead. Five of them—ranging from $550-$1,400—accept the 3D conversion lens which costs another $350. We haven’t tested them but the 3MOS models should be quite good. Opt for one of them—you’ll love the 60p setting. Sometime in the future, if you’re feeling flush and adventurous, experiment with the 3D attachment. As for the HDC-SDT750, take a pass until the price drops significantly.

New VESA display standard makes it easier to pick a monitor
Android 13 is here, and you can download it on your Pixel phone right now
Meta wants you to use its creepy Portal as a secondary monitor
Dell could be working on the same charging tech Apple has been developing
AMD is ready to battle Intel with next-gen 3D V-Cache CPUs
Corsair’s Xeneon Flex is the ‘bendable’ OLED monitor we always wanted
Samsung reaches new heights with this SSD, but it could go even higher
Chrome just added a great new way to protect your passwords
This game lets hackers attack your PC, and you don’t even need to play it
Apple M2 Pro and M2 Max MacBook Pro just received some good news
We finally might know what Apple will call its AR/VR headset
New AMD B650 Extreme motherboards are built for budget overclocking
This startup claims to have unlocked the secret to speedy CPUs