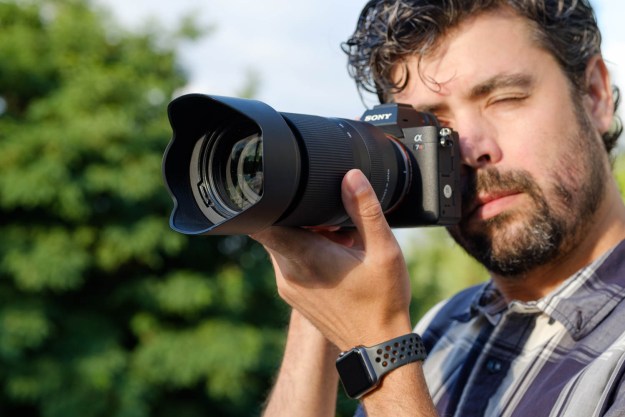 “The Tamron 70-180mm is an easy recommendation for nearly any photographer.”

The Tamron 70-180mm f/2.8 Di III is a new take on a pro-level, constant-aperture telephoto zoom. The focal length is a bit shorter than the typical 70-200mm, but Tamron’s goal was to make a well-balanced lens for full-frame mirrorless cameras, which focused the company’s attention on reduced size and weight. Currently available for Sony E mount, the $1,199 Tamron is less than half the price and just over half the weight of Sony’s FE 70-200mm f/2.8.

So it must not be any good, right?

Wrong. I don’t know what witchcraft went into making it, but the 70-180mm is, quite simply, magnificent. This is by no means a typical budget lens. Tamron made a couple of sacrifices — cutting 20mm off the telephoto end and forgoing optical image stabilization — to make weight, but I’d argue those were smart decisions and well worth it. The optical performance is top-notch. Attached to a Sony A7R IV, on loan from Lensrentals for this review, I was very impressed with the detail the 70-180mm gave me — at least, under the right conditions.

But can an inexpensive third-party lens compete with Sony’s best? The answer is, as always, it depends — but I don’t think it really needs to. More than an alternative, the Tamron 70-180mm f/2.8 is a lifeline to photographers who, due to cost, would have never considered the Sony lens in the first place.

If you’ve ever shot a full-frame 70-200mm f/2.8 before, be it for DSLRs or mirrorless cameras, you will be immediately taken aback by the look and feel of the Tamron 70-180mm. It feels like it’s in a completely different class, weighing just 1.8 pounds, an almost unbelievable difference compared to the 3.3-pound Sony 70-200mm.

Unlike most 70-200mm lenses, including Sony’s, the Tamron does not use an internal zoom mechanism, so the barrel extends as you zoom in. This makes it feel less “professional” than its first-party counterpart, but it also means the lens measures just under 6 inches long when retracted — 2 inches shorter than the Sony. And even with the extending zoom barrel, it remains weather-sealed.

The shorter length and lighter weight negate the need for a tripod ring, which helps keep the profile as slim as it is. The very wide rubberized grip gives your hand a solid purchase on the zoom ring, and I actually like that it is in front of the manual focus ring (opposite of Sony’s lenses) as that placement made for a comfortable, balanced hold. For its part, the focus ring feels very smooth and provides a satisfying manual focus experience, even though it is not mechanically linked to the focusing elements.

And, yes, you will actually want to use that manual focus ring. The Tamron 70-180mm has a unique 1:2 macro mode, but it only works with manual focus and at 70mm. The difference in minimum focus distance between auto and manual focus is big, and the extreme close-ups possible in macro mode are unlike any other f/2.8 telephoto zoom that I’m aware of.

Other than the lock switch, which holds the barrel at 70mm when the lens is not in use, the exterior is sparse. Where the Sony 70-200mm is littered with switches to control focus and stabilization behavior, the Tamron 70-180mm is blank. The lack of stabilization explains part of this, but I would have appreciated an auto/manual focus switch, especially as manual focus is something you’ll actually want to use on this lens for the aforementioned macro mode. To engage manual focus, you instead have to do it through the camera’s menu, which is a little annoying.

If all the Tamron 70-180mm f/2.8 did was decrease the cost and size of a popular type of lens, that would have been enough. That is, in fact, exactly what I would have expected of old Tamron. But this is new Tamron, and new Tamron is not content to be a third-string player in the lens game.

The 70-180mm f/2.8 features six low dispersion elements, three aspherical elements, and nine rounded aperture blades. This is not the type of optical formula I expect on such an affordable lens, although it is down on the total number of elements compared to Sony with 19 versus 23 (the Sony also uses an 11-blade aperture).

Of course, the number of high-end elements doesn’t always equate to high performance, but in this case, Tamron has delivered. Although there are some caveats I’ll get to, this lens is remarkably sharp. It produced excellent results in my test photos, revealing details in textures I hadn’t seen before. This was, of course, aided by the 62-megapixel sensor on the Sony A7R IV, and I do believe this lens comes close to revealing that sensor’s potential. More megapixels will reveal lens imperfections, so the fact that the Tamron shines on the A7R IV is a testament to its quality.

Wide-open, you can expect very good sharpness in the center of the frame. However, at 70mm, sharpness falls off noticeably toward the edges. This is far less of a problem at 180mm. By f/5.6, the image is extremely sharp from edge to edge at any focal length. Vignetting is minimal and essentially gone by f/4, although overall transmission at the telephoto end at f/2.8 is about 1/3 stop lower than at the wide end, as the “vignette” seems to creep across the entire frame.

To truly take advantage of this lens’s sharpness consistently, you have to use a high shutter speed, tripod, or both. Many of my handheld shots came out slightly soft due to motion blur, even with the camera’s in-body stabilization. This is where additional lens-based stabilization would have helped. For some photographers, particularly for weddings and even shooters who need to be able to work in low light and use slower shutter speeds, this could be a deal-breaker.

However, the A7R IV reveals faults unlike any other full-frame camera and is incredibly unforgiving. On a lower-resolution body, such as the A7 III, motion blur won’t be as noticeable, but I’d still recommend a tripod (and f/4 or smaller) when you want to guarantee the best results.

Color me impressed — astonished, even. I absolutely love that Tamron decided to start competing as a premium brand. The 70-180mm f/2.8 Di III strikes the perfect balance between quality, size, and price. This is a rare example of a lens that I can recommend to just about anyone, from the amateur, to the enthusiast, to even the professional.

I was a little disappointed that so many of my handheld shots weren’t perfectly sharp, but I could likely have solved this by raising my ISO and shutter speed a stop. As much as I would like to see lens-based stabilization, I also appreciate how lightweight and affordable the 70-180mm is. Again, I think Tamron made the right sacrifices.

And, obviously, if you don’t have a Sony E-mount camera, you’ll have to look elsewhere.

While it doesn’t feel as robust as 70-200mm lenses with internal zooms, the 70-180mm is still well built and should last for many years.

You already know what I’m going to say. Yes, of course.

Topics
What really determines your camera’s resolution? We asked an expert
Canon EOS R5 is everything the R isn’t, thanks to stabilization, 8K, dual slots
Nikon’s new Z mount 70-200mm f/2.8 lens is not quite ready for prime time
Lightweight and low-cost, Fujifilm X-T200 and new 35mm lens target beginners
How to remove the background from an image
Instagram boss says to expect even more video content
6 awesome Earth images captured from the ISS in July
This GoPro Hero 10 bundle is $100 off at Best Buy today
The best iPhone tripods for 2022
Watch this Mavic 3 drone soar above the world’s highest mountain
How to watch DJI unveil an all-new drone today
DJI Avata vs. DJI FPV: Which first-person drone is best for you?
Astronaut reveals source of ‘intriguing’ bright light on Earth