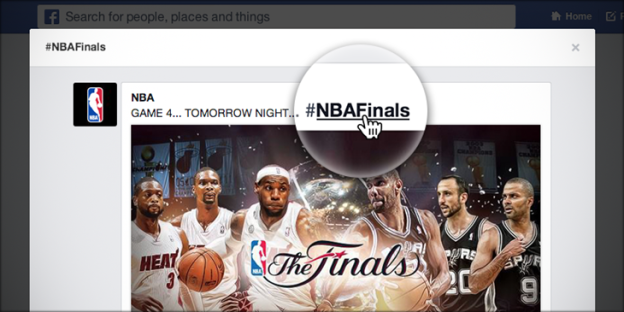 Facebook is always in constant flux, coming up with one reason after another for users to remain faithfully addicted to the all-in-one social network. In an attempt to woo its dwindling teenage demographic and improve their not-so-effective News Feed curation, the company has decided to take yet another feature from Twitter’s playbook and offer it to their users: The hashtag.

Yes folks, Facebook clearly wants to be a little more lot like Twitter, where one simple click of a trending topic will yield you countless posts that broach your desired subject. A quick glance at all your social media accounts – Twitter, Instagram, Tumblr, Pinterest, among others – will show you how hashtags have revolutionized how people communicate online. In a blog post announcing the update, Facebook acknowledged the massive amount of information on their site and the need to bring certain topics and conversations to the front of the line.

Regular social media users who’ve opted for cross-platform posting have seen their Twitter hashtags pushed into their Facebook feed, but this time they will actually be clickable. Users will then be led to a feed that contains public posts from all over Facebook discussing the topic, including those your own friends have shared.

In a nutshell, here’s what Facebook users can expect to be able to do, hashtag-wise: If you want a quick and easy way to know more about the #RedWedding and find out what the big deal is, you can simply type the hashtag into your search bar. You can also click on hashtags that originate from services like Instagram as well as compose posts directly from the hashtag feed and search results.

While employing the hashtag is not exactly a direct fix to the ever-present problem of important updates being buried deep in your News Feed, Facebook declares that its adoption of the popular device is the company’s first step in making news discovery a lot easier to deal with in the social network. The company ends its announcement by alluding to future functions that are in the works, all of which will be designed to improve public conversation on the site.

TikTok Now is the latest attempt to clone BeReal
How to post on Pinterest. An Easy Beginner’s Guide
Instagram to start testing a repost feature
TikTok continues to rebut reports of a security breach
Snapchat is down right now. Here’s what we know
The more Instagram copies TikTok, the more I hate using it
Elon Musk hints that he could start his own social media platform
Facebook Messenger finally starts testing end-to-end encryption for all chats
What does a check mark mean on Facebook Messenger?
Twitter’s latest features are all about curbing election misinformation
Snapchat Plus subscribers are getting these four new features today
You can (sort of) generate art like Dall-E with TikTok’s latest filter
You can now use the Add Yours sticker on Reels for Facebook and Instagram