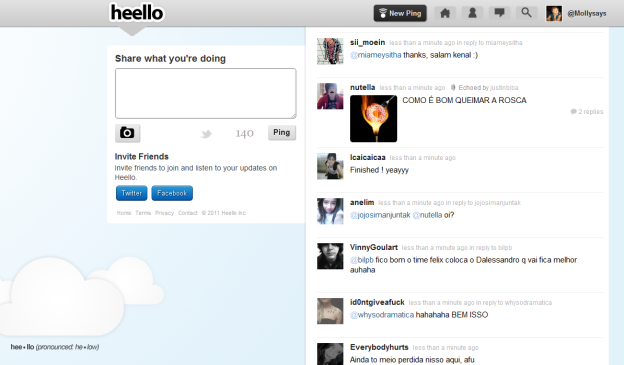 Noah Everett is nothing if not bold. The TwitPic founder describes himself on Twitter as “the nice guy that finished first,” and yes: He’s the guy who posted the Twitpic-seen-round-the-world from the inside of a police car.

It’s safe to say Everett has a healthy dose of ambition and confidence, which is why it’s not altogether surprising that he’s launched his own Twitter-clone, Heello. TwitPic, of course, has Twitter to thank for much of its success, but nonetheless Heello is here to try and steal some of its thunder. And just in time: Twitter has officially rolled out its own photo-sharing feature that should make TwitPic and its various competitors pretty nervous.

Everett told us he’s been working on the microblogging site for the past year, and the launch timing is pure coincidence. The idea originally revolved around making email more social and less overwhelming, but the team was pulled toward social. “The idea for Heello for what it is now came out of hearing user’s frustrations (and even our own) of not being able to post text, photos, videos or do check-ins from one single service; they were all spread out among different sites and this confuses a lot of uses.”

Heello’s (pronounced he-low) user interface looks like a stripped-down Twitter. Much of that is likely thanks to its infancy, as Everett says features like check-ins and video posts are on the way, as is something called “channels” that will let you group people. At the moment, it does have a photo-sharing tool included. Twitter loyalists don’t have to worry though: Everett assures you TwitPic isn’t going anywhere. Given how important of a tool it’s been for Twitter users from (very nearly) the get-go, that would mean a whole lot of very dense photo albums would become obsolete.

Here’s a quick breakdown of how the site lines up against Twitter:

At the moment, it’s difficult to connect with users on Heello. You can invite your friends via Twitter and Facebook and search for names or phrases, but there isn’t a suggest feature at the moment. The live feed is also updating so rapidly you don’t see many relevant Pings, and in our first go on the site there some glitches that made a few Pings pop up repeatedly. There’s no end to the things users are asking for: An official app (although Everett says Android and iPhone apps are in the works), echo notification, listener notification, suggestions of who to listen to… but keep in mind, the site launched this week. Everett also notes that notifications are on the way, which will make the site infinitely more useful.

If you’re already on Heello, look for TwitPic and Heello team members on the site. They are taking suggestions and being fairly responsive about it.

The jury’s still out on the future of Heello. There have been a handful of Twitter clones that have been DOA, but Heello does seem to have a little more steam to ride off of for now. You do have to think that Heello is giving TwitPic some competition at the same time that Twitter introduced what’s seriously going to impact the photo-sharing platform. It’s seems like something of a convoluted business plan, but one that we’re interested to see play out. And so far, it’s got one million Pings in 48 hours to show off.

As Everett puts it, Heello “is an evolution of TwitPic. It’s another way to share what you’re doing with photos, videos, locations, but this time we’re not reliant on Twitter’s platform.” He also says that future features, like a group messaging function and the forthcoming Channels, will differentiate Heello from competitors.