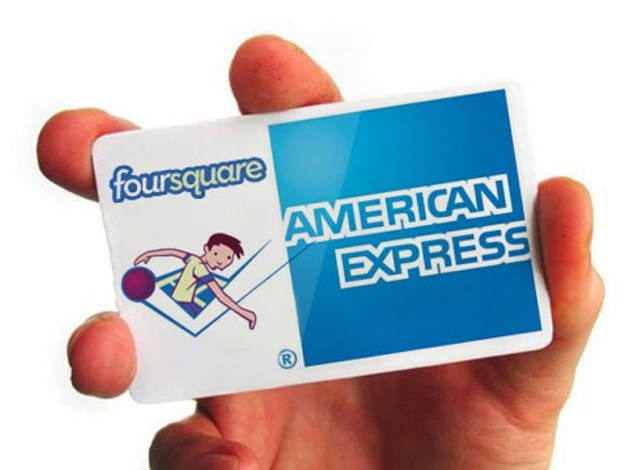 The power of social media remains unrealized. Even Facebook is learning by trial and error, experimenting with this new medium while we simultaneously consume it. And because the industry remains constantly in-flux, the missteps are various and many.

But a surprising contender is leveraging social platforms to its advantage. American Express has made a thorough and multi-faceted go at social this holiday season, using a handful of networks to fuel its focus on e-commerce.

Some brands are natural fits for social applications—generally, consumer product manufacturers like Target, Vitamin Water, Pepsi, and Old Spice easily fit the social media mold. While it might not fit in this category, American Express is getting ample help from the e-commerce surge this holiday shopping season. Formerly small startups like Groupon and Foursquare have been pioneering the evolution of how we buy things using social media, so it’s only natural that a company with the background and resources that Amex has would want a piece. Here are a few ways the company is cleverly exploiting social shopping trends.

The idea of a virtual stamp card isn’t novel. Everyone wants to be rewarded for their loyalty, a scheme various deal and location sites have capitalized on—and now, Amex. The company is partnering with Seamless, a New York-based startup that specializes in ordering takeout and delivery online. For every four orders of at least $15 you make using Seamless, Amex credits you $10. And this isn’t the first time Amex has shown interest in digital commerce startups: the company will be heavily investing in this market.

There’s something to be said for the element of surprise: as humans, we’re suckers for it. Enter Amex’s Gift Chain, a newly-launched program where members will get a surprise gift for spending $25 at participating online retailers. The catch, that you have no idea what you’re getting, is obvious. But possibilities include a year membership to ShopRunner, a $200 Amex e-gift card, or $100 in Nike gift cards. Or it could be the $5 Godiva gift card. Still, it’s an effective campaign since consumers are scouring online sales, and the extra incentive will likely end quite a few to the participating retailers’ sites.

The fine print: You have to sign up using an eligible Amex card (Macy’s, Bloomingdale’s, corporate, and prepaid Cards including American Express Gift Cards and SERVE Cards are not eligible), and you have to have been a member before November 27 of this year. You have to spend online using the card sometime between November 28 and December 21. Also, there’s a “while supplies last” clause attached.

Amex was a major sponsor of Small Business Saturday this year, the Saturday after Thanksgiving where consumers are encouraged to shop locally. Of course, the company attached its name to the day not only to get a little recognition for promoting small vendors. Amex teamed up with Foursquare (the two announced a partnership this past summer) to offer $25 for spending $25 or more at participating retailers. That isn’t where the integration ends, however: the company announced recently that card members can still sync their Amex to Foursquare for special offers and to get $10 back for spending $10.

The fine print: Again, the $10 for $10 is available at participating outlets. Prepaid cards and corporate cards are not eligible, either.

Topics
Pinterest aims to be more than just inspiration with its new shopping hub
Insta-checkout? New Instagram service lets you shop without leaving the platform
Pinterest personalizes online window shopping with new tools
Instagram expands its slick shopping experience to tempt you to spend
How to use Twitter Advanced Search
Twitter to start charging for verification mark, reports say
Having trouble accessing your Instagram account? You’re not alone
Elon Musk considers bringing Vine back from the dead
Staying on Twitter? Here are two ways to make it easier
Elon Musk now Twitter CEO after firing entire board
Twitter Blue is losing Ad Free Articles and Musk’s latest tweets indicate further changes
Clear Mode on TikTok: Here’s what it is and how to use it
Twitter’s edit button could soon be free for all users