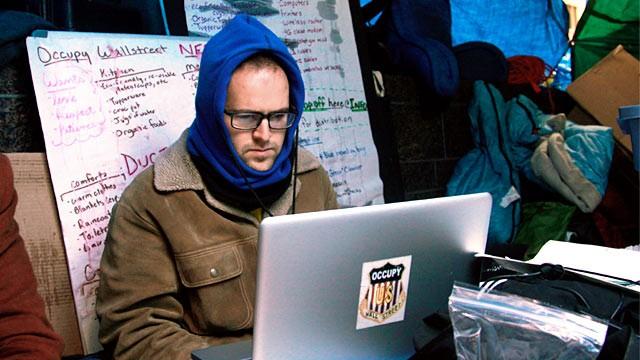 Facebook rivals and detractors have been springing up online for awhile now. It most significantly started with Diaspora, the anti-Facebook, open source social network that launched with the idea of segmenting how you share online. Anybeat (formerly Altly) has also tried to execute these ideas, as has Path and newcomer Unthink.

While these networks were born of a desire to connect without Facebook and to potentially do it better, none of them have had an already established community behind them. Now, the Occupy Wall Street protestors are trying to create their own social media platform, using the anti-corporate movement’s members as fuel.

According to Wired, a group of developers associated with OWS are working on their own Facebook. Their motivation is partially to have a focused space for like-minded individuals to communicate and organize. It’s also because they don’t entirely know what Facebook is doing with their data. “We don’t want to trust Facebook with private messages among activists,” developer Ed Knutson told the site.

At the moment this platform is being called Federated General Assembly and will work like Facebook and Twitter applications that use the Open ID and OAuth permissions. In order to join, you have to be invited and then vouched for by a member of your movement’s local network.

Facebook backlash is nearly as old as Facebook, but there’s never been a collective group like the Occupiers who have taken up the cause of creating an alternative. But does mean this idea has legs to stand on? Sites have tried time and time again to accomplish this, without any feasible success.

It deserves to be said that protestors shouldn’t be so quick to abandon Facebook (or even Twitter) for a new medium. These social sites were hugely instrumental during revolutions in the Middle East, and we can’t imagine their international presence is going to be impeded by the Occupy movement. It stands to reason that many users interested in being a part of the Occupy version represented on Facebook are also interested in worldwide demonstrations, and for that reason a great many would remain on these sites.

But if the bar is set low enough, this thing could serve a purpose. Protestors’ social media use has been targeted this year, from threats during the UK riots to Twitter subpoenas regarding user information. Secure messaging and event organization features would be the main purpose of the application, and anything that’s willing to build off of Facebook or Twitter rather than go head-to-head with them has a much better shot. But attempting to lure Occupiers over completely is a fool’s game–the project would be dead in the water if that were their mission.

Two things set this idea apart however: using the Facebook or Twitter permission technologies and the OWS movement. While the latter of these two has seen better days, having any pre-existing user base is more than most new social platforms start with.

Facebook details plans to combat election interference on the platform