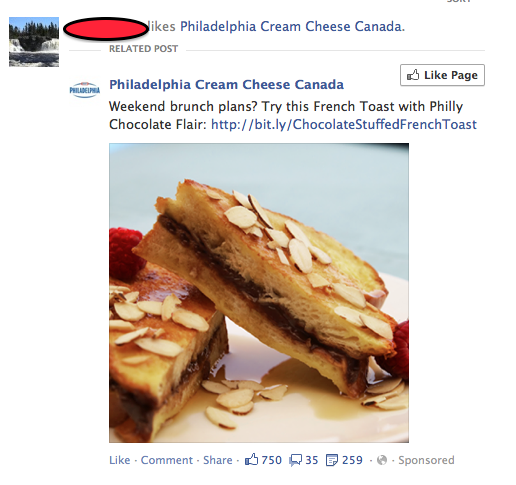 Facebook needs ads to remain a free service and turn a profit.  That’s the reality of the situation, and no matter how apoplectic we all get when I see countless wedding photography ads cropping up in the News Feed, it’s not really fair to rag on the social network for doing something necessary. All that said, it’s seemed like the Facebook advertising situation has been out of control for awhile now.

Sponsored Stories, one of Facebook’s more insidious ad campaigns, was among the easiest to despise, which is why it’s a good thing it’s one of Facebook’s ad platforms that is getting cut over the next six months as part of a streamlining project.

What was so bad about Sponsored Stories? There was basically nothing good about Sponsored Stories, since they perverted the purpose of Facebook to turn ordinary users into unwitting shills. Facebook was originally appealing because it was like a digital hangout. Now, with tons of brands and companies present, obviously there’s going to be an element of people trying to sell you something. But the fact that Sponsored Stories took what users said and did on Facebook and tried to turn their fans into involuntary, unpaid spokespeople was gross.

Sponsored Stories were ads dressed up like missives from your friends, and unlike the more traditional online ads on Facebook, they got integrated into your News Feed so it seemed like your friends were just updating you as usual. Facebook explained the distinction well when it was attempting to attract advertisers: “There is a key difference between Ads and Sponsored Stories. Ads can only be shown in the right hand side and are not eligible for News Feed. Sponsored Stories, because they originate from organic content, are eligible to be shown in both the News Feed (desktop and mobile) and right hand side and are therefore benefit from significantly higher engagement.”

Facebook tried to play it off that these ads had a more central place in the Facebook experience because they derived from organic user actions, but that simply wasn’t true, and people could tell they were getting ads served up as genuine content. This inspired a lawsuit that allowed individual users to opt out of the Sponsored Stories, although it didn’t ban the use of the stories altogether. And the new Facebook Timeline redesign places ads even more front-and-center, so the obnoxiousness that is Sponsored Stories got an even more prominent place.

Unfortunately, the idea of Sponsored Stories is unlikely to go away, as people at Facebook and other online content purveyors try to find ways to make it as palatable as it could be profitable. And Facebook product marketing director Brian Boland said as much to Ad Week, noting “Sponsored stories as an idea doesn’t go away. Sponsored stories as a product goes away.” This means Facebook is likely looking to re-tool the idea of Sponsored Stories in a way that’s less offensive to users but still lets marketers imbue their products with the organic feel of a real Facebook post.

So something equally annoying or worse is probably coming along the vein of Sponsored Stories, but for now, let’s celebrate this little victory and savor the moment when Facebook pulls the ad format and hasn’t yet replaced it with another.

Even though Facebook’s quest to find profitable ad models is necessary for the company’s health, Facebook really toed the line with Sponsored Stories because they diminished the overall quality of the user experience – and loyal users are really the only thing that keeps Facebook valuable. Hopefully the next iteration of sponsored content won’t be so unpleasant. Then again, considering how much Facebook has embraced the creepiness of targeted ads, that’s probably too much to hope for.

Amazon sues 10,000 Facebook groups over fake reviews
Your Facebook account could get multiple profiles for different interests
Everything we know about the new Snapchat Plus subscription
Twitter apologizes for personal data misuse with timeline alert
Snapchat is down right now. Here’s what we know
The more Instagram copies TikTok, the more I hate using it
Elon Musk hints that he could start his own social media platform
Facebook Messenger finally starts testing end-to-end encryption for all chats
What does a check mark mean on Facebook Messenger?
Twitter’s latest features are all about curbing election misinformation
Snapchat Plus subscribers are getting these four new features today
You can (sort of) generate art like Dall-E with TikTok’s latest filter
You can now use the Add Yours sticker on Reels for Facebook and Instagram