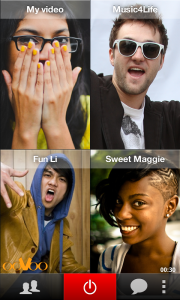 Social video call application ooVoo continues to build, and today the company is announcing it’s now enabled four-way video mobile chats. The Web application, which boasts 54 million users, already offers 12-way video chat sessions, but the mobile version will now be able to handle up to four different users in one call, on one screen. The feature is available for Android and iOS, and is operable between users on different operating systems.

Video has become a hot social commodity – and for skeptics, a big question mark. Various startups are attempting to understand where social and video intersect; will its practical possibilities or its creative potential resonate most with users? There’s a ton of experimentation going on here.

OoVoo is clearly trying to exploit both. The application deeply integrates with Facebook but also uses a familiar Skype-like set up for launching and holding calls. In a demo and call with ooVoo execs Jay Samit and Larry Lieberman, they made it clear how important a priority social is to them. “It’s the marriage of communication and social,” Samit tells me. “Facebook is there so you can stay in touch with what your friends did; this is how you can show your friends what you’re actually doing and not miss those spontaneous moments.”

Despite this emphasis, there’s plenty below ooVoo’s surface that makes it a compelling service. During my hands on time with the service, video and audio feedback were spot on. That terribly distracting delay between video and audio that even the most popular chat and call apps are subject to was nowhere to be seen. This lack of reliability makes it rather impressive that ooVoo’s able to stream four videos to individual handsets at once. “How well our video calling works it a testament to our engineers’ hard work and witchcraft,” Leiberman tells me.

OoVoo analyzes the various devices’ signals it’s working with, and will drop video for the weakest signal if need be, keeping audio running and keeping both operating for the devices with bandwidth that are able to handle it. “If you can’t handle video up and video down, we keep the audio going for you, and both going [for the other people on the call] so no one loses the experience,” says Leiberman. Competitor services, largely, just drop calls entirely once one of the participant’s bandwidth is unable to support it.

In addition to enabling four-way video chat, the ooVoo update always allows you to text during the call — so if you have a private message for one of the participants, you are able to contact them via SMS one-on-one.

“Mobile is taking place on social,” Samit tells me, emphasizing that more social elements is the number one requested feature from ooVoo’s users. This new push means ooVoo’s bent on exploring and exploiting that intersection.

How to post on Pinterest. An Easy Beginner’s Guide
Instagram to start testing a repost feature
How to use Twitter Circle to limit who sees your tweets
How to use Twitter Analytics
Twitter profiles for businesses just got way more useful
How to post on Reddit: everything you need to know
This Twitter vulnerability may have revealed owners of burner accounts
A new Snapchat feature lets parents see who their teens chat with
Yes, Twitter is down right now, and we don’t know when it’ll be back
WhatsApp adds new privacy features that everyone should start using
Snapchat is down right now. Here’s what we know
The more Instagram copies TikTok, the more I hate using it
Elon Musk hints that he could start his own social media platform