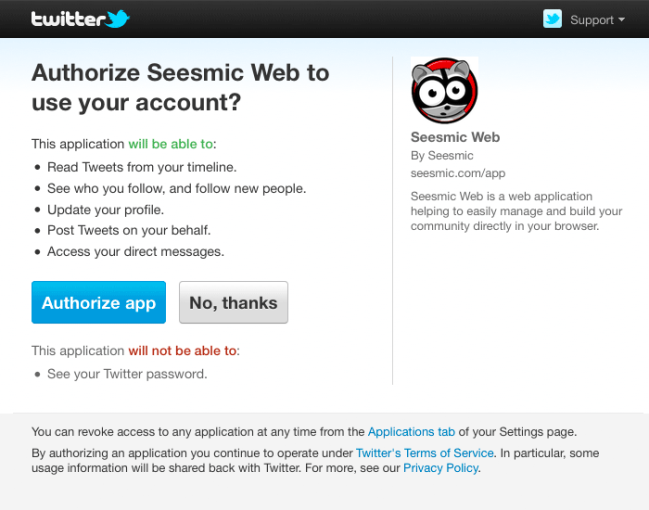 In an attempt to give users greater control over their accounts, Twitter announced this week tighter controls on third-party app developers. The new regulations restrict third-party apps from access users’ direct messages without expressed consent.

“Beginning today, we’re giving you more control over what information you share with third-party applications,” writes Twitter in a statement on the company blog. “Apps that you use to access your direct messages will ask for your permission again. By the middle of June, applications that do not need access to your direct messages will no longer have it, and you can continue to use these apps as usual.”

While this is certainly good for user privacy, it has a significant downside. Namely, users will now have to go to Twitter.com when setting up accounts with any app, including native apps like TweetDeck, Twitterrific, Tweetbot, etc.

As Daring Fireball‘s John Gruber points out, this is “a huge pain in the ass,” especially when setting up an app with multiple accounts. And having multiple accounts is one of the primary reasons to use a native Twitter app. Not only that, but these are the apps for which it makes the most sense to allow direct message access, since they are being used to send and receive direct messages.

It’s understandable that Twitter would want to reign in the proliferating number of third-party apps as a security precaution. But the company need to be careful not to inhibit how users access and use the microblogging service, or it will start to push people away. Considering Twitter just passed the 300 million user mark, however, that doesn’t seem much of an issue.