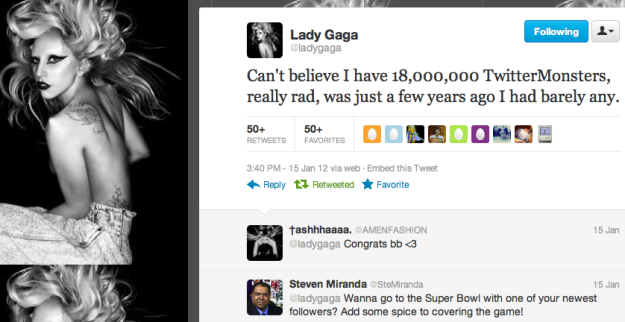 Justin Bieber. Lady Gaga. Katy Perry. Barack Obama. Rihanna. What do these public figures have in common? Not only do they make up the top five list of most followed people on Twitter, they also are some of the many celebrities active on the platform who are hounded not just by fans, but fake followers as well.

No one is immune to the onslaught of spam and fake profiles filling Twitter, a problem that appears to only be getting worse. Turns out, even the likes of the Bieber and the President are being barraged by these faux accounts.

SocialBakers has pretty reliable criteria for pinpointing phony followers, and upon running the Internet’s most favorite Twitter users through the site’s fake followers feature, you will discover that many of their Twitter stats are hugely bolstered by fake numbers. Just take a look at the results of reigning King and Queen of Twitter, Justin Bieber and Lady Gaga:

Justin Bieber currently has 37.6 million Twitter followers, narrowly beating Lady Gaga’s 36.2 million. According to SocialBaker’s analysis, Bieber actually only has 19.5 million (52 percent) genuine followers, while Gaga has 13.7 million (38 percent). Earlier analysis conducted by Statista only last week showed Gaga having more “real” Twitter fans, but it looks like Bieber has regained his lead this week; with fake following in play, this race to the Twitter top may seesaw more frequently.

Here are the summarized results for the rest of Twitter’s top 10 most followed profiles:

Bieber maintains top spot, while YouTube’s 14.2 million has the highest percentage in legit Twitter following at 54 percent – even higher than Bieber’s 52 percent – pushing Gaga’s 13.7 million-strong following out of second place. Katy Perry has the highest discrepancy with almost 24.1 million followers classified as either fake or inactive, dropping her from third to sixth place; the same happens for POTUS, who drops from fourth place to seventh. Rihanna stays put in fifth place, but Taylor Swift swiftly overtakes her with 51 percent “good” followers. Finally, Timberlake climbs a spot, overtaking Shakira’s 8.4 million real followers with his 9.5 million.