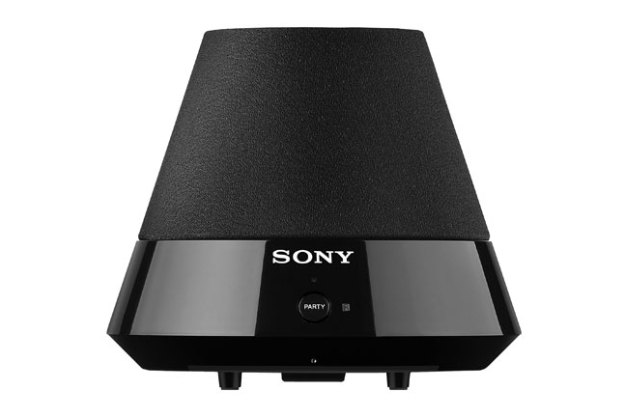 “For convenience, the small size of the NS300 is a real bonus. It’ll fit just about anywhere and fill medium-sized spaces with music”

Check out our overview of the Sony HomeShare system for more information, and links to reviews of other HomeShare components.

The SA-NS300 is the smallest of three wireless network speakers Sony offers. The considerably larger SA-NS400 runs an additional $100 and seems designed for higher performance audio. Something in our gut, however, tells us that the NS400 may get pushed aside in favor of the anticipated SA-NS500, which brings in Apple Airplay compatibility and a much more modern design.

The NS300 looks like a black road cone with its head chopped off toward the top. The top third of the speaker is covered with black cloth, the rest is shiny black plastic. On the “front” of the speaker is the PartyStreaming button. On the back we found a LAN port, a ⅛-inch audio input jack, volume control, WPS switch and power switch. We appreciate the inclusion of the analog input jack, which allows the speaker to be used without a wireless music server, if desired. Though, we should note that it would make for a pretty expensive iPod speaker at $199.

To set up the NS300, you must connect it via the provided LAN cable to a wireless router or access point. The rest of the process involves a setup wizard on a provided CD-ROM. Just let your network connected computer find the S300 and turn it on. That’s it. We now have a wireless network speaker.

The speaker will be recognized by Window Media Player 11 or 12 as a “play to” option. As such, any computer on the network running Windows XP, Vista or 7 can play any accessible WMA (except pro. voice), AAC, LPCM, WAV or MP3 files directly to the NS300. At least that’s the theory, anyway. We had a little trouble with some of our files and never did get to the bottom of the issue. We suspect it may have had something to do with a bitrate limitation, but none of Sony’s documentation indicates any bitrate limits for any of the supported file types. We simply got a message from Windows Media Player indicating that media information could not be obtained. Odd.

The NS300 is intended to be that little speaker you can place just about anywhere. Put it on a desk, on a dresser, in the bathroom, or out on the deck. Its 5 5/8 x 5 /5/8 x 4 ⅞-inch measurements keep it from being a space hog, but those diminutive dimensions also make for less robust sound. We don’t think much could be done to make it sound bigger… its just physics. With that said, we think the little 360-degree speaker sounded just fine for passive listening. It’s not going to be the life of the party, but just fine for spreading music around the house.

For convenience, the small size of the NS300 is a real bonus. It’ll fit just about anywhere (as long as there’s a wall outlet nearby) and fill medium-sized spaces with music. For those who like a little more bass, take a look at either of Sony’s larger network speaker options.